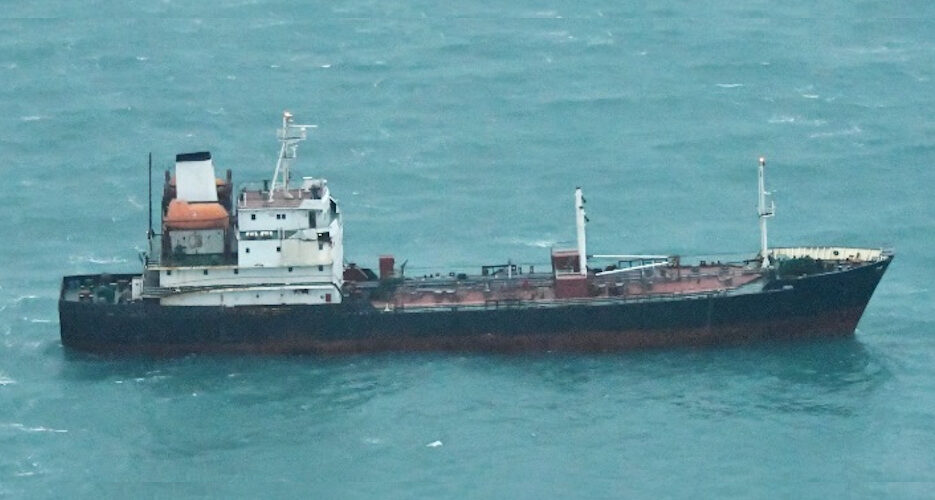 A sanctioned North Korean oil tanker was photographed conducting a ship-to-ship (STS) transfer off the coast of Shanghai in mid-January in violation of UN resolutions, according to the latest in a series of reports on such activities from the Japanese Ministry of Foreign Affairs (MOFA).

Japan concluded that the Chon Ma San (IMO number: 8660313), a vessel designated by the U.S. Treasury and the UN in early 2018, was likely engaging in a STS transfer with another vessel “of unknown nationality.” 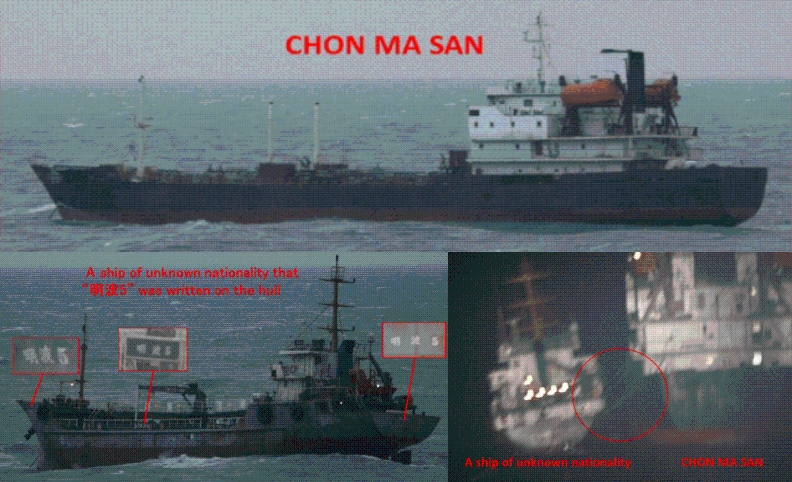 The ship began broadcasting its location again in October after an over-two-year hiatus, revealing at least four trips through the strait between Korea and Japan and, notably, a four-day period of circling in the strait following the January STS transfer.

A photograph taken by the Japanese Tokiwa replenishment tanker around midnight of January 11-12 showed the Chon Ma San linked up with a ship with the name “明波5 (Ming Bo 5)” written in Chinese characters on its hull.

The location of the suspected STS transfer was “around 240km eastern offshore of Shanghai,” the MOFA report, released on Friday, said.

STS transfers “of any goods or items that are being supplied, sold, or transferred to or from the DPRK” were banned under UN Security Council (UNSC) Resolution 2375 passed in September 2017. 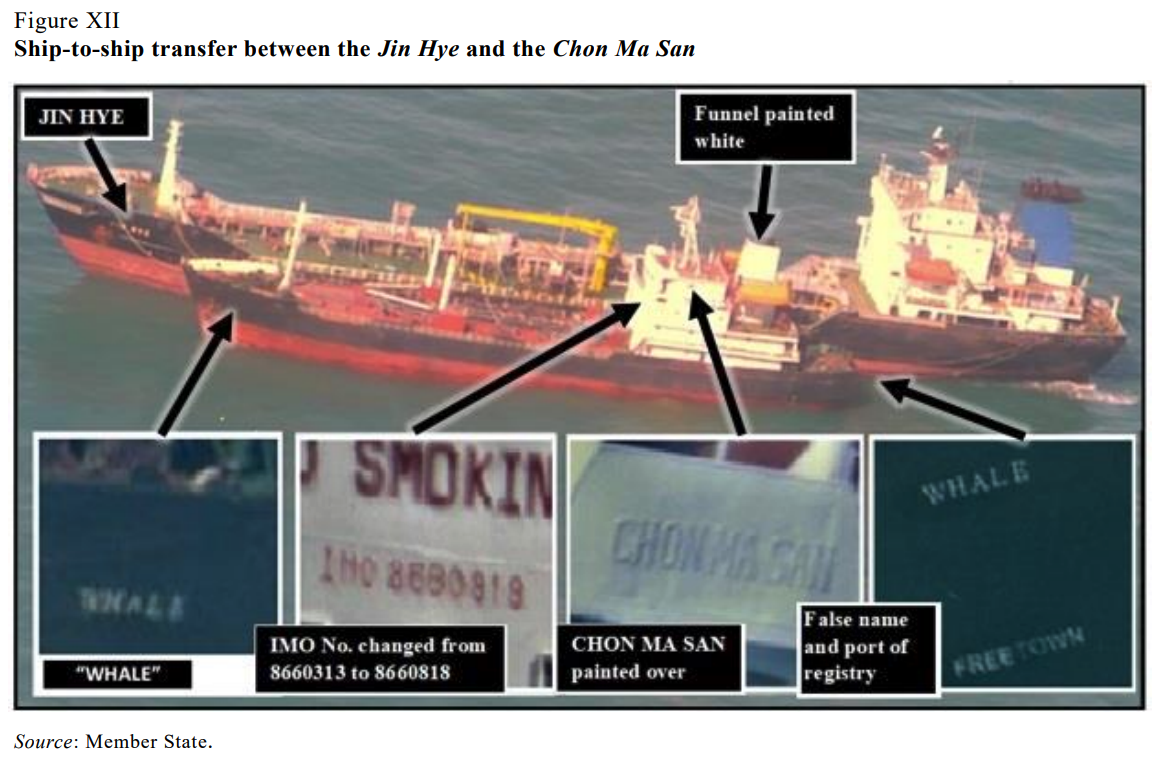 On the very same day, it was photographed by Japan Maritime Self-Defense Force aircraft engaging in a STS transfer with the Maldivian-flagged tanker Xin Yuan 18 around the same location off Shanghai as in the latest case.

The UNSC North Korea sanctions committee followed in March that year by taking the recommendations of a member state and voting to also sanction both the Chon Ma San and the Korea Achim Shipping Co., resulting in an asset freeze on the vessel and a ban on port calls to member states.

The U.S. continued to pursue the North Korean tanker’s activities, and in August 2018 sanctioned two Russian entities connected to a Russian-flagged vessel called the Patriot that was found to be engaging in STS transfers with the Chon Ma San. 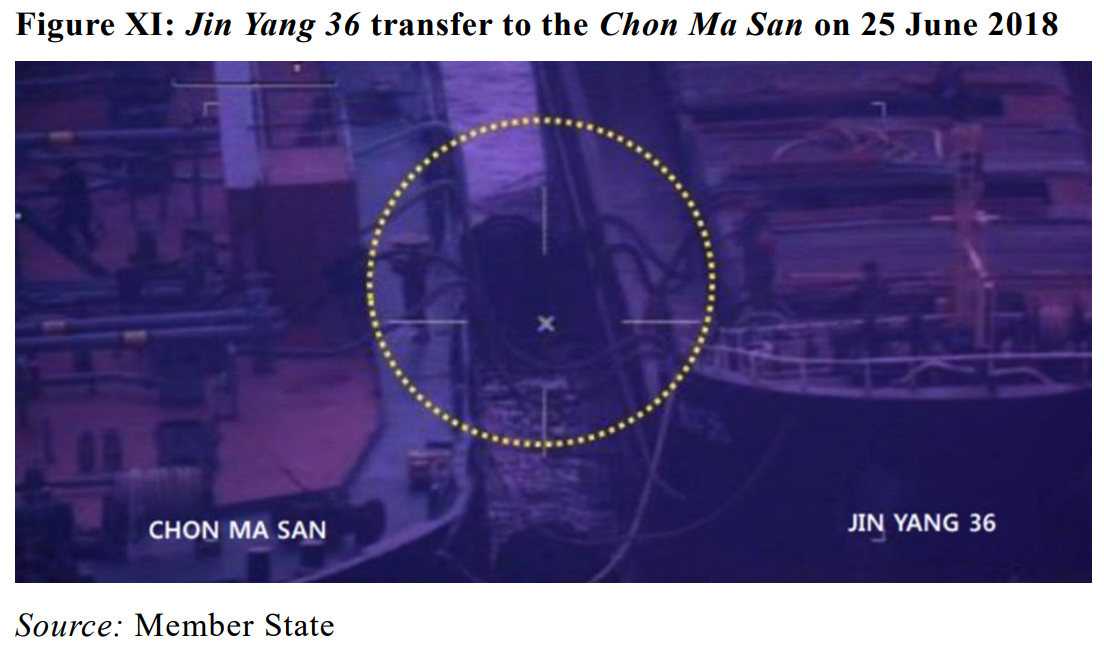 In another recorded instance of the Chon Ma San engaged in an STS transfer, the 2018 UN Panel of Experts (PoE) report on North Korean sanctions detailed a case of the vessel around December 5 2017 linked up in the East China Sea with the Sierra Leone-flagged tanker Jin Hye (IMO No. 8518572).

“The Chon Ma San disguised its identity by painting the names ‘Whale’ and ‘Freetown (Sierra Leone)’ over the original name and port of registration and changing the “3”s to “8”s in the IMO number on the superstructure (8660313 to 8660818),” the report said, adding that “the flag of the [DPRK] on the funnel was also painted over with white paint.”

The 2019 PoE report said that, according to an unnamed member state, the Chon Ma San was one of six of the “most active” vessels “accounting for 50 per cent of all transfers” among 23 DPRK tankers being tracked for STS transfer activity.

Additional cases in the report that the Chon Ma San also “engaged in ship-to-ship transfers with and received fuel from the Myong Ryu 1 and the Jin Yang 36 (金洋36), both of unknown nationality, on 4 June and 25 June 2018.”

Friday’s report from the Japanese MOFA was its 16th public report on North Korean STS transfers since the UN resolution came into effect, covering the 24th such individual event witnessed by Japanese and partner naval forces.

LOITERING AFTER THE TRANSFER

After disappearing from Automatic Identification System (AIS) tracking services since June 2017, the Chon Ma San reappeared on October 18 heading west through the Korea Strait towards China, according to the Ship Tracker tool from NK News‘s sister site NK Pro.

This was the first of four instances in the months since where the tanker broadcast its location when heading through the strait, likely in order to avoid collisions in the narrow waters as the AIS system is intended.

DPRK ships are otherwise known to turn off their broadcasting systems to avoid detection while conducting shipments considered illegal under UN sanctions. 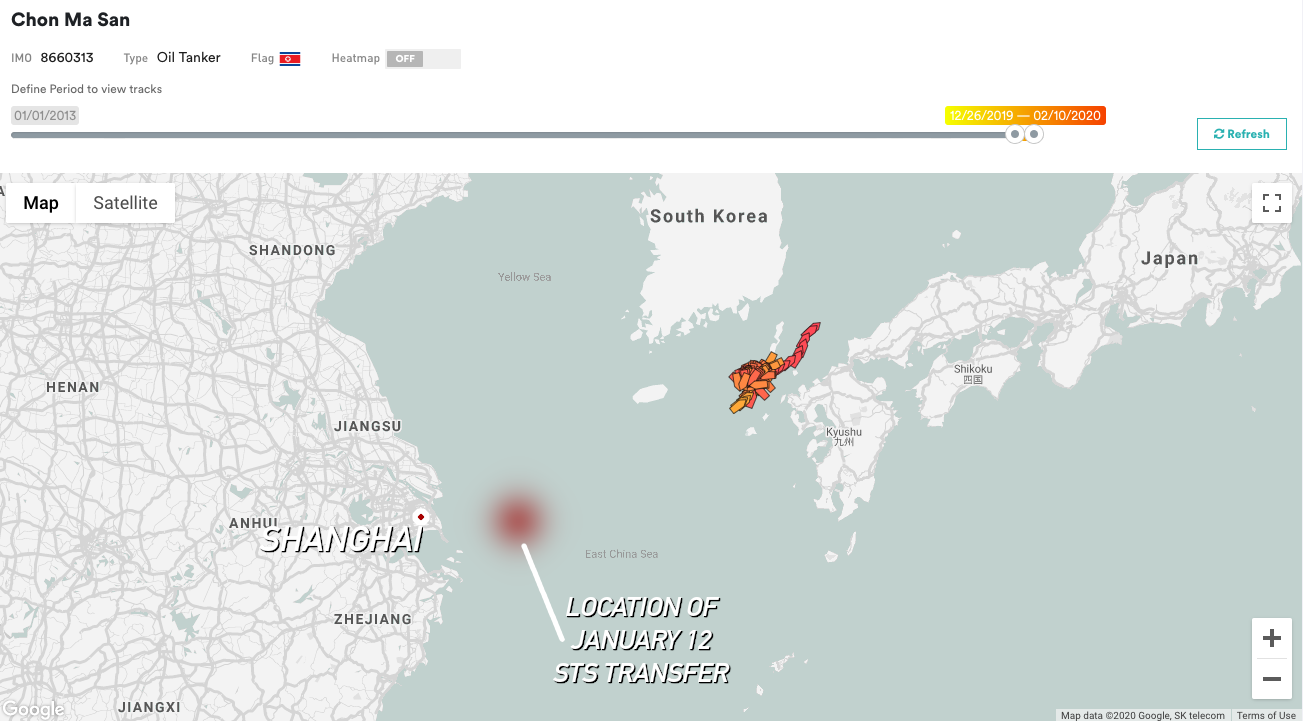 It did not broadcast its location again until after the January 12 reported STS transfer, but when it did show up again in the Korea Strait at the end of the month, it exhibited rather unusual activity.

NK Pro’s Ship Tracker shows the Chon Ma San circling a large area in the strait between South Korea’s Jeju Island and Japan’s Tsushima Island between January 27-30 before finally heading east, presumably back to the DPRK east coast, on January 31.

The instance raises questions because the area is not a known hot spot for STS transfers, and due to the large area covered across the four days compared to past loitering of DPRK ships near the Chinese coast.
One potential explanation is that the ship’s journey and possible scheduled return to the DPRK east coast was interrupted by North Korea’s work to disinfect ports amid nationwide efforts to prevent the spread of the novel coronavirus.

North Korea’s party-run daily the Rodong Sinmun reported on January 26 that the country was “tightening sanitary and quarantine inspection at border areas, ports and airports to block the disease in advance.”

It is not clear if the end-of-January journey through the strait was its first trip to North Korea after the January 12 STS transfer, though it is a possibility given apparently consistent location broadcasting since October in the high-traffic strait. The Chon Ma San may have also traveled to the DPRK east coast port of Nampho in the interim.