Venezuela: What happens when socialism fails 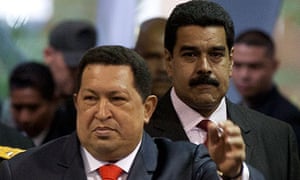 
In 1998, a career military officer was elected president of the wealthiest country in Latin America on a platform of socialism. It was an election victory that shocked the world, as many believed that the catastrophic failure of the Soviet Union had closed the book on socialism as a form of government.

"Western liberal democracy had emerged, as what he called, the final form of human government," continued Baier, "But did the collapse of communism really mean the end of socialism?"

Today, Hugo Chavez is gone, but his socialist "Bolivarian Revolution" drags on, trapping oil-rich Venezuela in an escalating state of crisis.

From 2007 to 2010, the Chavez regime seized majority control of four massive oil projects and American-owned oil rigs, and implemented a new tax on oil production, among other measures.

"Chavez won four national elections in a row," said Baier in the Fox Nation piece, "But when oil prices fell, the flaws of what was now called Chavismo were starkly revealed."

"What happens is that concentrated power and coercion that is a necessary part of socialism will distort the economy and then breed the need for more power for the government in the future to try to correct the inefficiencies that they've created in the past," argued American Enterprise Institute scholar Mark Perry.

"Once the government starts to take over the economy, and uses force and coercion and creates distortions that breed future government interventions to correct their past mistakes, and then you're down the road to serfdom," said Perry.

Chavez died in 2013 and his successor, Nicolas Maduro, a former bus driver, doubled down on Chavismo.

In 2018, 80 percent of the country was living below the poverty line and the annual rate of inflation reached 1 million percent, rendering the wealth of most Venezulan's nearly worthless.

A study published by the United Nations on Sunday found that one of out every three people in Venezuela is unable to secure enough food to meet their daily basic dietary requirements.

The assessment, conducted by the U.N.'s World Food Programme, found that 9.3 million people are "food insecure." Seventy percent of Venezuelans said that while food is available, they cannot afford it.

"The economy imploded and the country has collapsed to the point that it is generating more refugees now than the Middle East, than Syria," said Niall Ferguson, a senior fellow at the Hoover Institution.

In fact, in the last three years, 15 percent of the population of Venezuela has fled the country.

"It's been a catastrophe and it's a catastrophe that was predictable if you understood what socialism does," concluded Ferguson. "I think it is important because so few people on the left in Europe and in the United States recognized Chavez for what he was."

To watch the entire six-part series, "The Unauthorized History of Socialism" go to Fox Nation and sign up today.
Posted by Crude Oil Daily at 3:03 PM