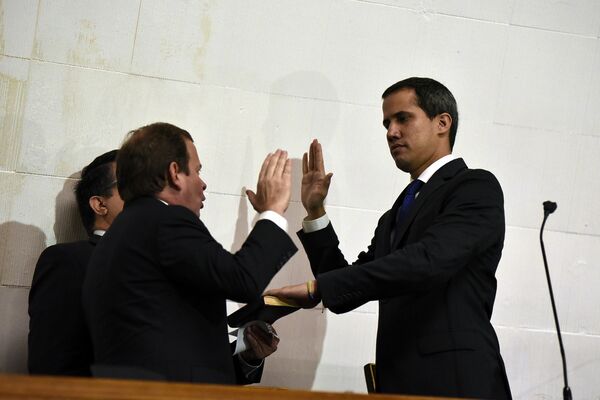 Venezuelan opposition leader Juan Guaido on Tuesday reclaimed the National Assembly that he heads, pushing past armed guards two days after President Nicolas Maduro’s loyalists blocked him from attending his own re-election. 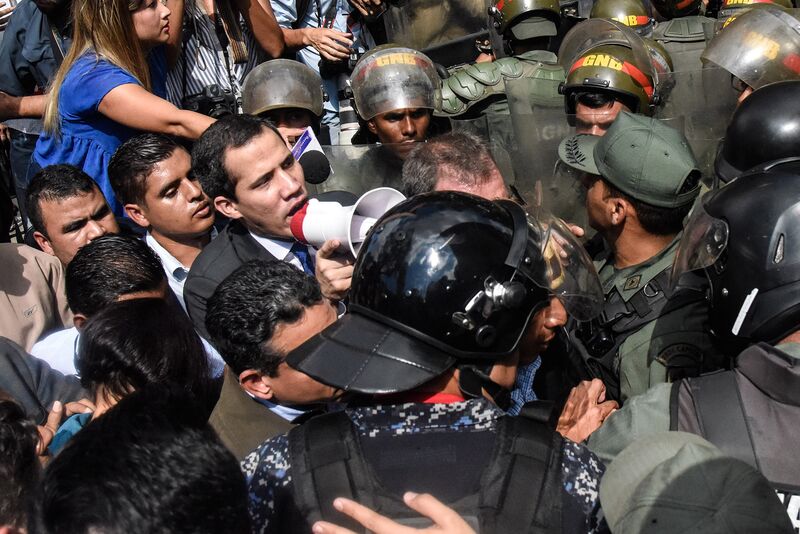 Juan Guaido speaks with a megaphone to the crowd as he attempts to enter the National Assembly in Caracas on Jan. 7, 2020. Photographer: Carolina Cabral/Getty Images
Guaido and his allies burst through the legislative palace’s doors minutes after a pro-government group led by lawmaker Luis Parra, who had claimed the presidency of the body, scurried to a next-door building for refuge.


Guaido climbed to the dais and took the microphone as opposition lawmakers sang the national anthem, which include the words “Death to oppression.” Lawmakers then voted to recognize Guaido’s re-election as head of the National Assembly for 2020. They rejected Parra’s attempt to claim the role thanks to a Sunday vote taken amid chaos in the chamber as Guaido’s supporters were barred, preventing a quorum.

“It’s a great feat for us to be here today,” Guaido said Tuesday after reclaiming his place. “This is proof of what’s possible if we’re firmly united and organized.”

Electricity was cut off at one point, prompting lawmakers to read the attendance list with the help of mobile phone lights and without microphones. Outside, armed civilian groups known as colectivos cornered and forcibly removed a group of journalists and lawmakers, beating and stealing from some of those gathered.

“The president of the National Assembly is Luis Parra; whoever is with Guaido must leave now,” they shouted.


The attempted takeover of what was Venezuela’s last democratic institution has deepened the standoff between Maduro and Guaido, who last year was recognized as the nation’s legitimate leader by more than 50 countries. The government had yet to comment on Guaido’s return to the assembly Tuesday.

“The opposition comes out well, in the sense that it managed to enter its natural space and hold a session,” said Ricardo Sucre, a political analyst and professor at Venezuela’s Central University. “It sends an image of a cohesive, organized opposition, that could achieve a concrete effect.”

Venezuela, a formerly prosperous petrostate, has spiraled into misery after decades of misrule under Maduro and his predecessor, Hugo Chavez. The failure of their socialist program has been exacerbated by a plunge in oil prices and U.S. sanctions. Crucial oil infrastructure is defunct, hyperinflation has ravaged the economy and food and medicine are scarce.

During Tuesday’s session, Guaido pledged to find a solution to Venezuela’s crisis “so we can live with dignity and prosperity” and said the next session would take place Jan. 14. On the way out of the legislative palace, Guaido and his deputies covered their eyes and mouths as they were met with tear gas.

At a news conference later in the day, he demanded that the regime explain why it deployed military personnel to blockade the assembly building and called for protests and rallies. He said the opposition would appoint ambassadors to Bolivia, El Salvador and Uruguay.

Parra, whom the assembly is investigating in connection with a graft case, claims to have been voted in legitimately as the new national assembly head on Sunday. The U.S. is considering sanctioning lawmakers who supported his claim, according to a person familiar with the deliberations.

Guaido for his part, was confirmed Sunday by 100 lawmakers in an off-site vote after he was barred from entering the chamber.

“The opposition lawmakers are putting on a little show,” socialist lawmaker and former labor minister Francisco Torrealba said Tuesday. “This confrontation within the right is embarrassing, they’re hitting each other instead of solving the crisis fueled by U.S. politics.”

— With assistance by Nicolle Yapur, and Nick Wadhams
Posted by Crude Oil Daily at 5:51 PM