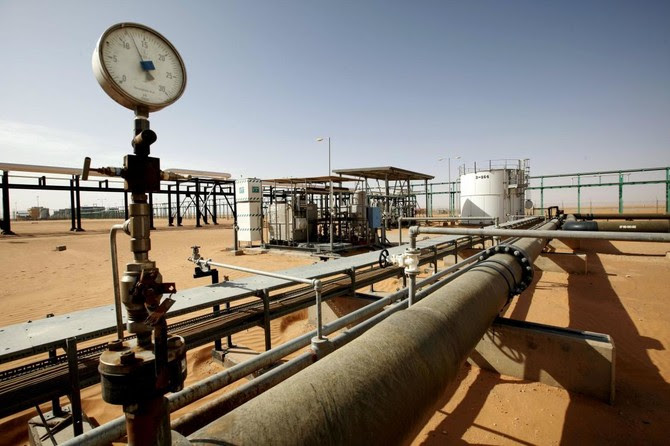 Libyan tribesmen staged a protest on Saturday at the giant El Sharara oilfield aiming to shut down the facility. The oilfield pictured in 2014. (Reuters)


LONDON (Reuters) - Oil slipped from a five-month high above $71 a barrel on Tuesday as Russian comments signaling the possible easing of a supply-cutting deal with OPEC countered concern that violence in Libya could further tighten global markets.

Supply curbs led by the Organization of the Petroleum Exporting Countries have underpinned a more than 30 percent rally this year for Brent crude, despite downward pressure from fears of an economic slowdown and weaker demand.

“The mood is increasingly turning bullish, but several feedback loops are about to start spinning that stand in the way of a prolonged oil rally,” said Norbert Ruecker of Swiss bank Julius Baer.

Russia, a participant in the OPEC-led supply cuts that expire in June, signaled on Monday it wants to raise output when it next meets with OPEC because of falling stockpiles.

On Tuesday, President Vladimir Putin said Russia did not support an uncontrollable rise in oil prices and that the current price suited Moscow.

U.S. sanctions on Iran and Venezuela have deepened the OPEC supply cut and concern has grown this week about the stability of Libyan output. The OPEC member pumps around 1.1 million barrels per day, just over 1 percent of global supply.

“The oil market is already undersupplied, so if supply from Libya also falls away the supply deficit will become even bigger,” said Carsten Fritsch, oil analyst at Commerzbank.

On Monday, a warplane attacked Tripoli’s only functioning airport as eastern forces advancing on the Libyan capital disregarded international appeals for a truce.

Yet despite generally bullish sentiment, concerns that an economic slowdown this year will hit fuel consumption have been preventing crude prices from rising even higher, traders said.

The International Monetary Fund on Tuesday cut its global economic growth forecast for 2019.

Increases in U.S. crude inventories have also put a lid on gains. U.S. crude stocks are forecast to have risen by 2.5 million barrels last week, the third straight weekly addition.

The American Petroleum Institute, an industry group, issues its supply report at 2030 GMT, ahead of Wednesday’s official figures.