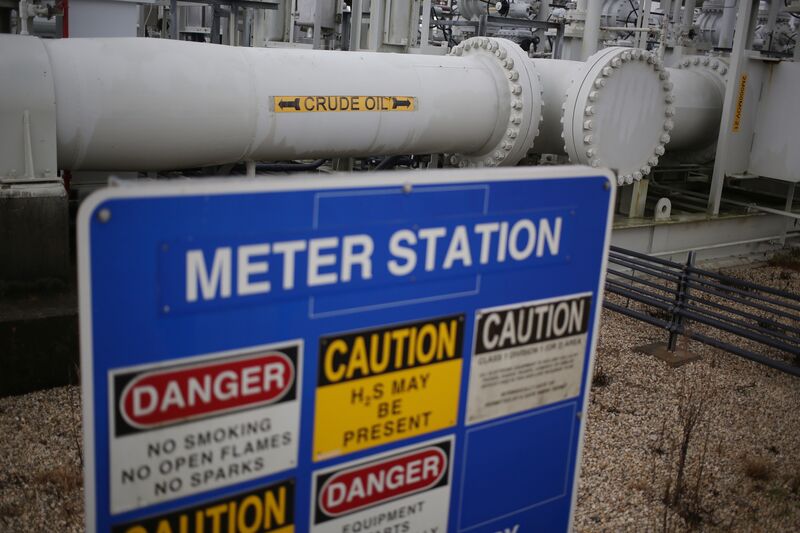 (Bloomberg) -- Exxon Mobil Corp. is the latest company to raise concerns that a stockpile of U.S. government crude is tainted with poisonous gas.

The American energy giant said some of the oil it purchased last year from the Energy Department’s Strategic Petroleum Reserve, or SPR, contained "extremely high levels" of hydrogen sulfide, according to emails obtained by Bloomberg under the Freedom of Information Act. In some cases, the gas level was 250 times higher than government safety standards allow.

"The Department of Energy takes safety, security and environmental impacts involving SPR activities very seriously," agency spokeswoman Jess Szymanski said. "Last fall, an SPR cargo received by Exxon Mobil was found to contain higher-than-expected levels of hydrogen sulfide. Since then, the Department has worked with Exxon to resolve this concern, and find alternate options for the cargo’s delivery."

Analysts have pointed to the stockpile as a safeguard against tightening crude supplies after U.S. sanctions on Iran and Venezuela curbed their oil exports. But Exxon’s discovery, which follows complaints by Royal Dutch Shell Plc, Macquarie Group Ltd and PetroChina Co., suggest that the reserve may not offer refiners as much insurance against diminishing volumes of higher sulfur, or sour, crude as previously thought.

The Energy Department disputed claims that it repeatedly sold tainted crude, saying that some companies’ high hydrogen sulfide readings were "spurious" or the result of contamination during shipping. In PetroChina’s case, however, the agency acknowledged spending around $1 million to clean up a contaminated cargo.

The prospect of tainted crude in the reserve complicates future sales of U.S. oil, a key tool for funding government programs. A 5 million-barrel sale is planned for 2019, and 221 million barrels of oil are planned for sale from 2020 to 2027.

While hydrogen sulfide occurs naturally in crude, producers often take pains to remove it because it can put workers at risk and corrode pipelines and refineries. Many pipelines have capped the permitted amount of hydrogen sulfide, or H2S, at 10 parts per million (ppm).

Exxon was one of five companies that purchased oil in an Energy Department sale in August. Exxon took 1.5 million barrels of Bryan Mound sour crude -- a high sulfur oil that’s recently become more expensive as global supply shrink -- by pipeline to Texas City. There, the company discovered hydrogen sulfide levels that were at 5,000 ppm, according to emails sent to the department in November by Mattias Bruno, a lead oil trader at Exxon Mobil.

The exposure limit set by the Occupational Safety and Health Administration is 20 ppm. Exposure at 500-700 ppm could cause a person to collapse in five minutes and die within an hour. After discovering high levels of the gas, Exxon launched an investigation, according to the emails.

The Energy Department in a statement suggested that Exxon’s readings were possibly erroneous, noting that the facility where the contamination was discovered was not "H2S qualified." Oil was delivered through other facilities without incident, the agency said.

Shell, Macquarie and PetroChina have also complained about hydrogen sulfide levels in government crude. In those cases, the oil was pumped from Bryan Mound to the Freeport, Texas, terminal owned by Seaway Crude Pipeline LLC -- a joint venture between Enterprise Products Partners LP, the operator, and Enbridge Inc. -- before being loaded onto vessels.

In a statement to Bloomberg, the Energy Department dismissed Shell’s complaint as spurious and attributed the Macquarie incident to a paperwork error. No payment was made to either company.

However, the agency verified PetroChina’s concerns and paid to clean up the contaminated oil at a cost of around $1 million.

If the stockpiles are contaminated, the elevated levels of hydrogen sulfide could be the result of a high-sulfur oil put into the reserve years ago that’s blended with newer oil, according to chemical engineers and testing experts. It could also be the result of a naturally occurring bacteria that reduces sulfur to hydrogen sulfide, which could have grown in the caverns over decades.
Price Questions

So far, the quality concerns raised by companies haven’t affected bid prices for SPR oil, according to the Energy Department. But if crude quality issues persist, that could have implications for the future sales of oil from the SPR, which is about 60 percent sour crude.

(Updates to include all firms owning the Freeport terminal in 13th paragraph.)
--With assistance from Dave Merrill.

To contact the reporter on this story: Catherine Ngai in New York at cngai16@bloomberg.net

To contact the editors responsible for this story: David Marino at dmarino4@bloomberg.net, Catherine Traywick, Joe Ryan

For more articles like this, please visit us at bloomberg.com
Posted by Crude Oil Daily at 1:20 PM