Hot on the heels of a troublesome 2017, the new year has proven to be just as challenging for owners of the largest tankers. In its latest weekly report, shipbroker Charles R. Weber said that “VLCC rates continue to sour as the market progressed into 2018 as rising levels of surplus availability in the key Middle East market against lackluster demand continues to undermine sentiment.    The VLCC surplus at the conclusion of the January Middle East program’s second decade is projected to stand at 29 units, which represents the highest level since September, when AG‐FEAST TCEs stood at about $11,600/day.    TCEs on these routes are presently averaging ~$12,862/day, suggesting that further near‐term downside potential remains. In the coming week, we expect that rates will continue to decline to an effective floor just above OPEX”.

The shipbroker added that “thereafter, the surplus appears set to narrow modestly by end‐January loading dates in the Middle East market, though it is uncertain if commercial managers are hiding a larger number of vessels than usual. Given this uncertainty and the lagging nature of rates to fundamentals changes, we would not likely expect much rate improvement until charterers have progressed firmly into February loading dates, even if fundamentals do narrow during January’s final decade”. 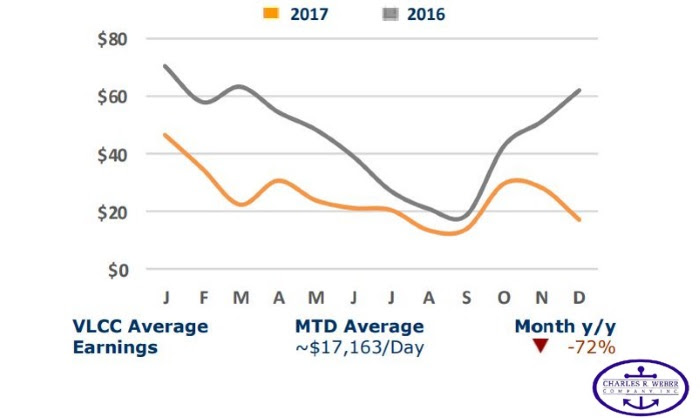 Meanwhile, “the VLCC fleet grew by 4% during 2017 on a net basis (a level which was markedly lower than had been projected as rising $/LDT demolition values incentivized an unexpected surge in demolition sales during the year), and followed on 2016’s net growth rate of 7%, leading the market into its worst structural position in decades. Indeed, present average earnings of just ~$13,653/day represent a y/y decline of 71% ‐‐ and compare with average earnings during 2017 of ~$25,308/day. Coming at a time when the market is typically at a seasonal high, the indication is that 2018 will likely be an extremely challenging year for owners”, CR Weber concluded. 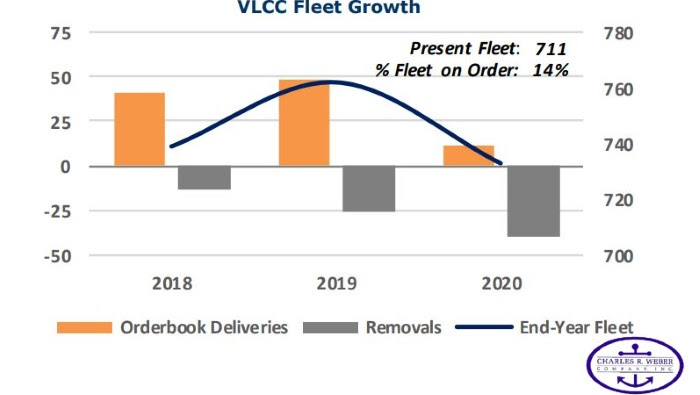 In the tanker market this past week, in the Middle East, rates to the Far East shed 0.82 points to conclude at ws40.23. TCEs concluded at ~$13,653/day. Rates to the USG via the Cape were unchanged at ws19.86. Triangulated Westbound trade earnings concluded at ~$15,616/day. Similarly, “the West Africa market saw rates unchanged at ws43.79 with corresponding TCEs concluding at ~$15,156/day. Rates in the Atlantic Americas were softer on a growing supply/demand imbalance on sluggish exports from both the US and Venezuela. The CBS‐SPORE benchmark route shed $400k to conclude at $3.20m lump sum.  Round‐ trip TCEs on the route concluded at ~$15,156/day”, the shipbroker noted. 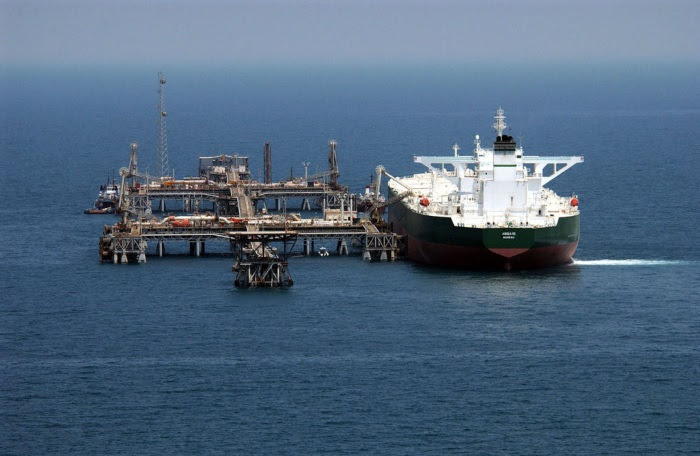 Meanwhile, in the Suezmax market, the shipbroker said that “demand in the West Africa market declined for a third consecutive week to its slowest pace since August.  Coming against a rise in availability, negative pressure on rates remained. The WAFR‐UKC route shed 4.2 points to conclude at ws61.2.    A particularly strong demand run during December’s final decade (materializing on the back of widened cash discounts to Brent) have kept availability levels from rising further still; however, as the perfuming units return to availability, a fresh misbalancing may materialize and place rates under fresh negative pressure.   Compounding woes, rates in the Americas market are declining on slower demand for long‐haul, extra‐regional voyages while slowing recent demand in the Middle East market could lead to westbound ballasts.  Limiting the extent of downside, average earnings in the class are already hovering around OPEX levels”, CR Weber concluded.