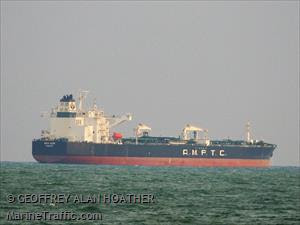 
A newly built Suezmax is due to load 100,000 mt of gasoline from the Ventspils Nafta terminal around January 26, with Vitol as charterer and West Africa as the most likely final destination, trading sources said Wednesday.

The 159,559 dwt Sea Icon, which made its maiden voyage last month as a clean product carrier, is expected to arrive in Ventspils, Latvia, on January 26, according to data from cFlow, S&P Global Platts trade flow software.

While the final destination of the vessel remains unconfirmed, many gasoline market participants expect the Sea Icon to sail to West Africa, notably because demand for gasoline into Nigeria is particularly strong at the moment.

"The ship has multiple options," a source at Vitol said.

West Africa is a likely destination as Vitol has shorts into the region, but the Persian Gulf is also a possible destination, a trader said.

Vitol is one of around 17 companies participating in the 2017 edition of the Direct Sale Direct Purchase program organized by Nigerian National Petroleum Corporation, whereby ten companies are paired with ten other companies to export crude from Nigeria and imports gasoline in exchange.

Flows of gasoline into West Africa, especially Nigeria, have increased in the past month amid gasoline shortages in the oil-producing country since early December.

Since the beginning of the week, a flurry of vessels were heard fixed or on subjects to bring more gasoline from Europe to West Africa, including three long-range tankers and at least seven medium-range tankers. While most of these vessels will load from the Amsterdam-Rotterdam-Antwerp hub, one is to load from Norway and another one from the Baltic.

Over the past ten days, three vessels reportedly loaded gasoline from the Baltic and are en-route to West Africa, according to a shipping report. The vessels are the Elandra Palm, which sailed from Klaipeda around January 15 and is said to be heading to Nigeria; the Lincoln, which departed from Ventspils on January 22 and is thought to be on its way to Lagos, Nigeria; and the MR Aries, which left Tallin on January 13 and is reportedly going to Lome, Togo.