Here's why Saudi Arabia might play hardball with OPEC Saudi Arabia's foreign minister, Adel al-Jubeir, at a hotel in Tokyo on September 2.

Recent developments in the OPEC universe have fueled speculation that oil producers might actually be able to agree on something at the informal talks in Algiers, Algeria, set for September 26-28.

Most notably, Saudi Arabia and Russia agreed at the G-20 summit in China last week to cooperate on oil and create a "working group" to stabilize markets — a move some analysts considered to be "another indicator of the extreme economic duress that producers are enduring."

And on the following day, Iran gingerly offered some support for an oil-production freeze — though it did not actually agree to join one.

But some, however, have argued that there remain several reasons the Saudis might ultimately be opposed to any tangible agreement.

"The slowdown in Saudi Arabia's economy has prompted the authorities to soften their opposition to a deal to freeze oil output," Jason Tuvey, the Middle East economist at Capital Economics, wrote in a note to clients.

But "while a deal is more likely than it was earlier this year, there are several reasons, including ongoing tensions with Iran, to think that the Kingdom will be hesitant to sign up."
Chief among them:
For what it's worth, Khalid al-Falih, Saudi Arabia's oil minister, dismissed the need for a production freeze last Monday, leading analysts to wonder whether the Saudi-Russian agreement on oil cooperation would amount to anything.

Plus, the director for international affairs at the state-run National Iranian Oil Co., Mohsen Ghamsari, said last Wednesday that Iran would be ready to decide on capping production only after its output hit pre-sanctions levels, which would amount to just over 4 million barrels a day, according to Bloomberg. It now produces about 3.8 million barrels a day. 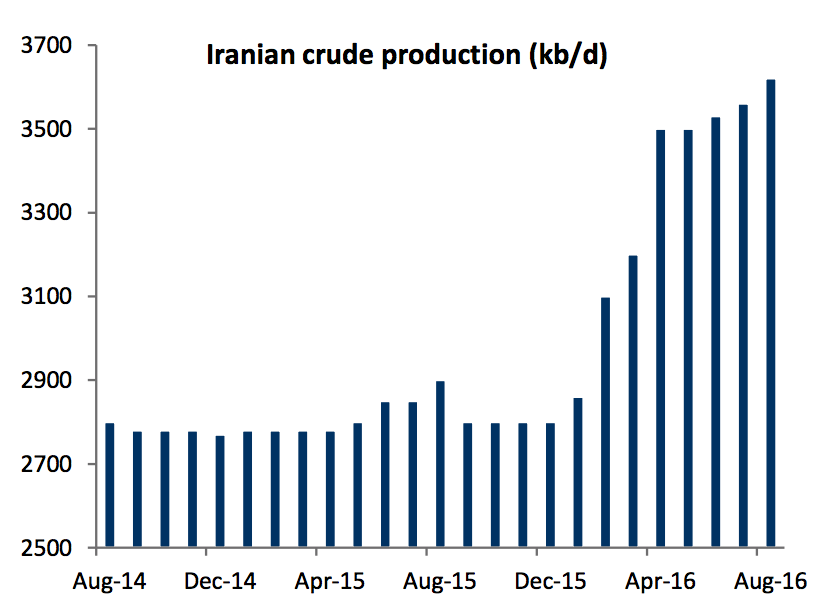 RBC Capital Markets
(It's worth noting that Iran's prior hard stance against any production freeze ultimately ended up being a major reason for Saudi Arabia's bailing on the meeting in Doha, Qatar, back in April.)

"While recent rhetoric suggests a freeze deal has a fighting chance, on-the-ground realities make this outcome far from certain in light of worsening geopolitical tensions within OPEC, too many members production below current and/or aspirational capacity, and demand concerns if prices are driven too high, too fast," a Macquarie Research team led by Vikas Dwivedi argued last week.

"Even if a 'freeze' truly materializes, it will provide little fundamental impact," Dwivedi added. "From a longer-term perspective, core OPEC and non-OPEC producers are eyeing $50+ levels to enable future growth."

"Thus, instead of a meaningful rapprochement among key producers, a 'freeze' may merely represent an opportunity to 'reload' only to resume oil market hostilities."