States with the highest (and lowest) gas taxes 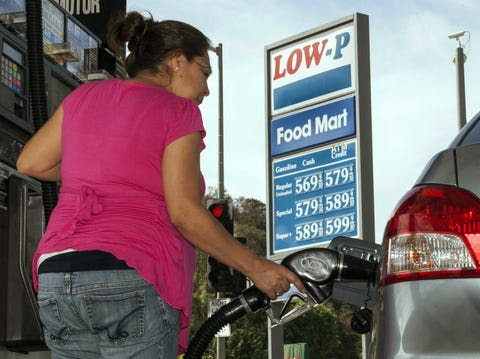 As gas prices continue to fall, some Americans believe that the federal government should raise its gas tax, which has been unchanged at 18.3 cents per gallon since 1993. Yet, despite a clear need to bolster transportation and infrastructure funding, which often comes from taxes on gasoline, Congress appears to have little interest in raising the fuel tax.

24/7 Wall St. reviewed effective gas tax rates in each state, as summarized by the American Petroleum Institute. We then compared the state's tax rate against the average gas price in the state. The share of fuel prices that are paid in taxes and fees has risen as gasoline has gotten cheaper. In a few states, taxes make up 15% or more of the price per gallon, including accounting for more than 21% of the gas price in Pennsylvania. Still, taxes in eight states account for less than 10% of the retail price of gas.

Not every state with a low gas tax, relative to the national average price, has a major incentive to increase the amount consumers pay. For instance, Alaska derives much of its tax revenue from oil production, and has historically had less use for a gas tax. However, in some states, the argument for a higher gas tax is likely more compelling. For New Jersey, which has the second lowest fuel tax and is constrained by substantial debts and pension liabilities, a gas tax hike could help it improve its infrastructure.

In some instances, states may not have the ability to raise more revenues from gas taxes, however. New Yorkers already pay more than 45 cents per gallon in fuel taxes, and generally face one of the nation's highest tax burdens. Thus, even at current low prices, it may be politically difficult for the state to raise fuel taxes.

One major complicating factor is that some states peg their fuel tax to the price of gas. As gas prices drop, the amount these states can collect will also fall, especially if the drop in prices substantially outweighs the extra amount Americans are willing to drive.

Another complicating factor in deciding how to tax gas is that the market for gasoline differs substantially across the U.S. States in the Southeast, for example, are home to some of the nation's least expensive gas, Green explained, "because these are states that are near major refineries, and also those refineries have access to domestic crude oil." California, on the other hand, typically has higher gas prices because its refineries consistently run at or near capacity to meet demand for the state's specific, legally-required blend of gasoline.

In order to identify the effective gas tax in each state, 24/7 Wall St. reviewed January 2015 data from the American Petroleum Institute. We also reviewed data on gas prices from AAA's Daily Fuel Gauge Report for January 14, 2015. Figures on state infrastructure are from either the Federal Highway Administration, or the American Society of Civil Engineers' Infrastructure Report Card. Figures on per capita taxes are from the Tax Foundation, while information on states' oil production, consumption and infrastructure comes from the Energy Information Administration (EIA).
These are the states with the lowest gas taxes:

Alaskans pay just 11.3 cents per gallon in gas taxes, the lowest of any state, despite having the second highest gas price in the nation. The state's economy has historically been dependent on the energy industry, which also accounts for much of its economic activity and tax revenues. However, this also exposes the state to fluctuations in the oil price, including the commodity's current rout.

New Jersey has the second lowest gas tax in the nation. The price of fuel, however, is relatively high due in large part to a statewide ban on self-service gas stations. Only Oregon has a similar law. While reform advocates argue that lifting the ban would lower gas prices, proponents of the ban argue that full-service stations are a critical source of jobs.

Gasoline costs $1.94 per gallon in South Carolina, one of only a few states where gas is below $2 a gallon. As in most states, low gas prices are the result of low taxes. South Carolina has the third-lowest gas tax in the nation. Overall state taxes are quite low as well, in fiscal 2012, the state collected $1,710 per capita in taxes, less than all but two other states.

Oklahoma levies 17 cents on each gallon of gasoline, the fourth lowest fuel tax nationwide. While the lower gas price is a boon for Oklahoma drivers, the state may have more trouble than others funding infrastructure projects. The state received a close-to-failing grade for its bridges and roads in 2013 from the ASCE, which noted that over 70% of funds from fuel taxes, registration fees and other vehicle-related sources "are diverted to non-transportation purposes."

Arizona maintains relatively low gasoline taxes, charging just 19 cents per gallon, among the lowest gas taxes of any state. As a result, less than 10% of the price of gas goes to the state, well below the average nationwide. The lack of competing uses for oil may also help keep gas prices down. According to the EIA, seven of every eight barrels of petroleum used in the state are used for transportation, mostly in the form of gasoline and diesel fuel.

MORE: See the full list of all 50 states from lowest to highest

These are the states with the highest gas taxes:

1. Pennsylvania
> Tax as pct. of gas price: 21.3% (the highest)
> State fuel tax: 50.5 cents per gallon (the highest)
> Gas price: $2.38 (7th highest)
Pennsylvania has the nation's highest fuel taxes, at 50.5 cents per gallon. This is due to the state's relatively new gas tax, passed in 2013. The new tax is charged on fuel transactions and is based on the wholesale price of gas — although the reference price used is locked in for roughly another two years and then becomes subject to an even higher minimum. The tax is designed to raise money for construction and necessary repairs for bridges and roads throughout the state.

Connecticut charges 47.4 cents in total taxes and fees for every gallon of gas, more than all but two other states. Yet, the state's gas taxes have been on the decline, as a portion of the taxes is based on gasoline prices. Currently, a gallon of gas costs $2.44 in Connecticut, among the highest gas prices in the United States, although far below the year ago price of $3.69 per gallon.

California's gas taxes are among the highest in the nation, with the state charging 45.4 cents for every gallon purchased. However, such high fees may well be justified as more than 29 billion vehicle miles were driven on California roads last October alone, the most of any state. Additionally, more than 36% of the state's bridge surface area was either structurally deficient or functionally obsolete as of 2013, more than in all but a few states. In all, California taxed nearly 10 billion gallons of gas in the first eight months of 2014, well more than any other state.

New York charges more than 45 cents per gallon in taxes, among the highest tax rates in the country. Yet, although the state's taxes are extremely high, they are likely needed. As of 2013, more than 60% of bridge area in the state was deficient, the highest rate in the United States. Critics of the state's tax policy, however, could point to New York's extremely high state and local tax burden, which was the highest in the country as of fiscal 2011, at 12.6% of per capita income.

North Carolina charges nearly 38 cents in taxes and fees per gallon of gasoline. The state also moved relatively quickly to hike the fixed portion of its gas tax by 1 cent by at the start of 2015. Yet, with gas prices expected to stay low, and part of the state's tax pegged to wholesale prices on a lag, the state's fuel tax could fall significantly in the coming months.

MORE:See how all 50 states rank in terms of gas taxes