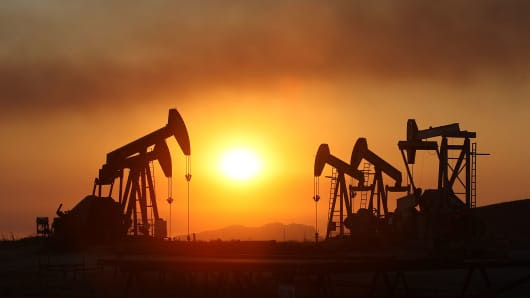 
Brent crude oil fell on Thursday, pressured by volatility in Ukraine that curbed risk appetite and fueled fears that it would slow growth in Europe and lessen oil demand.
U.S. oil futures also fell, but losses were capped by data showing the fourth straight weekly decline in oil stocks at Cushing, Oklahoma, the benchmark delivery point for the U.S. oil futures contract. Draws from Cushing oil stocks helped narrow U.S. oil's discount to Brent to nearly $6 per barrel, the tightest since Oct. 7.
Most equities markets around the world edged lower as traders remained suspicious of Russia's comments on Thursday that it will work with the West on resolving the crisis in Ukraine, while tensions in Crimea near the Russian border worsened.
U.S. equities were steady to slightly higher however as traders turned to Federal Reserve Chair Janet Yellen's testimony to the Senate Banking Committee for indications of the central bank's thinking on the economy's strength.
Brent crude was down 60 cents near $109 a barrel.U.S. oil fell 19 cents to settle at $102.40 a barrel, after ending 76 cents higher the previous session. The U.S. benchmark outperformed Brent, after the U.S. Department of Energy said on Wednesday that stocks at the oil distribution hub of Cushing, Oklahoma had fallen for a fourth straight week.

This helped narrow U.S. crude's discount to Brent to around $6 a barrel earlier in the session, the tightest point since Oct. 7. The spread last traded at $6.72 a barrel.
For more information on commodities, please click here.
Posted by Crude Oil Daily at 10:58 AM