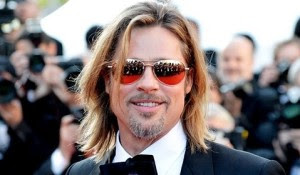 Hollywood Superstar, Brad Pitt has pro­duced a non-fictional documentary exposing what he terms “greed and exploitation” of Ghana and Nigeria by Texas-based oil explo­ration companies.
The documentary, which was written and directed by Rachel Boynton, an international film­maker, takes viewers behind the scenes and gives them exclusive access to boardroom discussions as oil company officials show how much they are interested in making maximum profits from Ghana’s newly discovered crude oil resources at the expense of Ghanaians.
The documentary titled, ‘Big Men’ shows the grand schemes inspired by Wall-Street investors to fleece Ghanaians.
The 99-minute documentary, which will be given a global exposure, would be released today in New York City at the IFC Center.
According to online movie review website, movievbox.net, the documentary, which is cur­rently receiving media raves, “follows the step-by- step process of how they (the multinational oil companies) conduct business after untapped oil fields are discovered off the coast of Ghana. It took Rachel Boynton seven years to painstakingly track these big players unawares to complete ‘Big Men’ which has been described as a thriller.
In an interview with movie reviewer, Dorri Olds on March 10,2014, Rahel Boynton stated, “The film is of a deep philosophical nature. It* s about greed and desperation and wanting to be big. That’s what connects everybody in the movie. When I was asking the questions it got turned around on me at one point when I was asked, “Don’t you want to be big?
In the documentary, the CEO of a multination­al company (name withheld) was heard saying, “Developing nations can’t get greedy” – he indicat­ed from the prospect of making billions out of their new crude oil production project off the coast of Ghana.
He explained why his company won a hugely  favorable deal with the government of Ghana around 2007.
The CEO justified why his company should see greater rewards than the industry standard, as they benefitted from the political administration at the time. The deal with Ghana was that the com­pany would keep a vast percentage of the oil rev­enue being drilled out of the Jubilee oil fields, 64 nautical miles off the coast of Ghana.
Over 70 percent of the total revenue is shared by the foreign companies. They justify the huge cut by arguing that they had taken all the risk.
“What did the Ghanaians know?” asked David D’Arcy, an internationally known film critic and art reviewer, writing for The National and Screen International online, The Art Newspaper, among others.
“Ghana (which we don’t see by way of the landscape, as we do Nigeria) presents a sad dilem­ma…Now Ghanaians are watching as an Ameri­can company gets rich on its resources. Will Ghana become a mini-Nigeria, or will it prosper as a result? There’s not much hope for any country that lacks the institutions to make prosperity possible.”
The documentary also showed the difficulties faced by the company when the John Agyekum- led administration finished its term and the administration was taken over by the National Democratic Congress (NDC) led by the now late John Evans Atta Mills.
“The previous government (the NPP govern­ment) was nice to the oil company. Certain things will have to change,” the former Minister of Ener­gy Dr. Joe Oteng Agyei was heard saying in the documentary.
Ghana is currently drilling about 100,000 bar­rels of crude oil off the Jubilee Fields and barely earns US$1 billion from its oil export annually.
Posted by Crude Oil Daily at 2:35 PM