OPEC Looks to the Sun for Strength


Middle Eastern members of OPEC are finally diversifying their energy base, pouring hundreds of billions of dollars into harnessing that other resource they feature in vast quantities: sunshine.

But it isn't what you think. The Saudis, Abu Dhabi and Iran aren't racing to burnish their green credentials by reducing their carbon footprints. They are investing in solar-power production mainly for one reason: to help them export even more oil and gas.

Like most countries, members of the Organization of Petroleum Exporting Countries rely on crude oil and natural gas to generate their own electricity for air-conditioning and other power needs. This reduces the amount of hydrocarbons they can sell abroad. During the summer the Saudis burn as much as one million barrels a day of crude oil—about 10% of their current production—for their own power consumption. 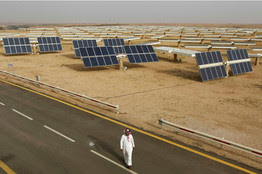 Close
Reuters
LIKE STRIKING OIL Saudi Arabia has a goal of meeting one-third of its electricity needs with solar power.

In a speech last year in Poland, Saudi Arabia's oil minister, Ali al-Naimi, made it clear the world's largest oil exporter aspires to be a solar powerhouse. "Oil is not the kingdom's only energy wealth: Saudi Arabia is blessed with an abundance of sunshine," he said, adding that such realities "make solar energy a natural, logical focus."

But in a speech delivered in January, Mr. al-Naimi elaborated on his country's thinking behind its push for solar. "I see renewable energy sources as…helping to prolong our continued export of crude oil," he said.

Saudi Arabia tops the list of Middle Eastern nations with plans to use solar energy to supplement local electricity needs. The Saudis aim to fill one-third of their power needs with solar and are seeking investments of $109 billion by 2032 to accomplish that goal.

In North Africa, Algeria plans to rely on clean energy—the majority solar—for 40% of its needs in 2030. Algeria is also supporting the Desertec project—a consortium that seeks to tap solar and wind power in the Sahara as a new source of electricity for Europe. The estimated total cost of that project is a staggering $500 billion over 40 years.

Elsewhere in the Mideast, plans are more modest, with countries generally seeking to fill 5% to 10% of domestic electricity and water-desalinization needs with solar power. Dubai has plans for a $3.26 billion park of solar plants, due to start producing by the end of 2013. Abu Dhabi expects to start generating power later this year from what it has dubbed the world's largest concentrated-solar-power project. Concentrated solar power uses mirrors or lenses to direct a large area of sunlight onto a small area—potentially increasing the energy produced. 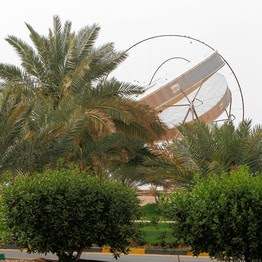 Some oil producers are pondering how much they should bet on solar compared with other renewable energy sources. A mechanical expert at Iranian power-generation company Mapna Group who asked not to be named estimates the cost of producing solar energy at $3,000 a kilowatt, compared with $1,800 a kilowatt for wind.

Solar energy has potential, he says. "But it will be expensive."

Mr. Faucon is a reporter for Dow Jones Newswires in London. He can be reached at benoit.faucon@wsj.com.
Posted by Crude Oil Daily at 10:44 AM