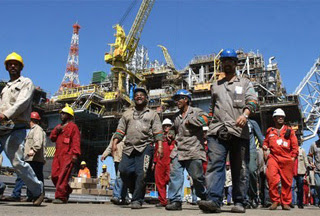 Oil workers in Nigeria, under the aegis of Petroleum and Natural Gas Senior Staff Association of Nigeria (PENGASSAN), have threatened a total shut down of oil and gas operations in the country if its 27 members sacked by Vam Oil Company, Onne, in southern Rivers State, are not reinstated.

Acting zonal chairman of the association, Friday Otono, who disclosed this to reporters here on Thursday, said the company had already been shut down by its members since Feb. 7 to protest the sack of the 27 workers that were laid off in Nov. 2011.

According to Otono, the protest was embarked upon by the company's staff in solidarity with John Ukegbu, a worker who was sacked on Oct. 19, 2011.

Otono claimed that Ukegbu was sacked without any cogent reason, pointing out that after the protest, 27 of the workers, who were PENGASSAN members, were also sacked.

The unionist said PENGASSAN had made several efforts to resolve the matter amicably but to no avail, and described the company's action as victimization.
Posted by Crude Oil Daily at 9:28 PM