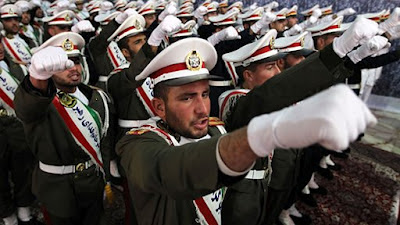 http://news.yahoo.com/exclusive-israel-warns-us-jews-iran-could-strike-153636488--abc-news.html
Israeli facilities in North America -- and around the world -- are on high alert, according to an internal security document obtained by ABC News that predicted the threat from Iran against Jewish targets will increase.

"We predict that the threat on our sites around the world will increase … on both our guarded sites and 'soft' sites," stated a letter circulated by the head of security for the Consul General for the Mid-Atlantic States, Eliran Avitan. Guarded sites refers to government facilities like embassies and consulates, while 'soft sites' means Jewish synagogues, and schools, as well as community centers like the one hit by a terrorist bombing in Buenos Aires in 1994 that killed 85 people.

The head of Shin Bet, Israel's internal security service, told an audience at a closed forum in Tel Aviv recently that Iran is trying to hit Israeli targets because of what it believes are Israeli attacks on it nuclear scientists. Yoram Cohen said that Iran's Revolutionary Guard, the same militant wing of the government linked to the recent alleged plot against the Saudi ambassador to the U.S., is working tirelessly to attack Israeli and Jewish targets abroad in order to deter Israel.

Local and regional law enforcement and intelligence officials in U.S. and Canadian cities, including New York, Los Angeles, Philadelphia, and Toronto have been monitoring the situation closely for several weeks, and have stepped up patrols at Israeli government locations and Jewish cultural and religious institutions. They have issued awareness bulletins reminding officers to stay vigilant.

Federal officials in those cities told ABC News that they have also increased their efforts to watch for any threat stream pointing to an imminent attack on either Israeli facilities, Jewish cultural or religious institutions or other "soft targets."

"When there is posturing like this, we always pay extra attention to any threat streams," one federal official said.

"The thwarted assassination plot of a Saudi official in Washington, D.C., a couple of months ago was an important data point," added the official, "in that it showed at least parts of the Iranian establishment were aware of the intended event and were not concerned about inevitable collateral damage to U.S. citizens had they carried out an assassination plot on American soil."

"That was an eye opener, showing that they did not care about any collateral damage," the federal official said.

After the disruption of the alleged plot, regional intelligence centers issued bulletins similar to the recent Israeli warning.

"In the past few weeks, there has been an escalation in threats against Israeli and Jewish targets around the world," one regional document noted. "Open source has reported many demonstrations against Israel are expected to be concentrated on Israeli embassies and consulates. Such demonstrations have occurred internationally as well as domestically. These demonstrations could potentially turn violent at local synagogues, restaurants, the Israeli Embassy and other Israeli sites. … Law enforcement should be vigilant when making periodic checks at all Jewish facilities.

And the Israeli bulletin warned that Israel's own passports might be used by terrorists intent on carrying out a plot.

"According to our evaluation there is a possibility that the forged passports will be used in order to pass as Israeli citizens at the security checks in Israel and around the world. Israeli security authorities may consider an Israeli citizenship as a [criterion] to proceed with a more lenient security check in secure sites such as airports, etc.," the letter stated.

The Israeli security bulletin came in the midst of heated rhetoric on the part of the U.S., Iranian and Israeli political religious and military leadership and follows the recent assassination of a key scientist in Iran's nuclear enrichment program. If the rhetoric is to be believed, there is a deep concern that Israel might launch a military strike against Iran during the spring of 2012.

The intelligence community assessment of that possibility, based on interviews conducted by ABC News, is considerably more nuanced, taking into account as it does the political will of the United States during an election year, the fragile nature of Great Britain's coalition government , the willingness of other allies to join in an offensive, the roles of Russia and China and Saudi Arabia in such a confrontation, and whether Israel would really be willing to launch a unilateral strike.

"But in this situation, the political rhetoric is actually quite important," one official told ABC News. "And that is why the official position -- of the U.S, England, France, Canada, Israel and allies -- is that nothing is off the table."

An apparent shift in the Israeli/U.S. relationship has complicated matters, however, said the official. In the past, Israel would probably have given the U.S. a heads up were it to launch a strike. Now that might not be the case. Among the English-speaking allies of the U.S., say multiple intelligence officials, there is currently a very limited expectation of any early warning.

While much of the public attention has focused on Israel and the rifts within its leadership on how to respond to Iran's nuclear weapons program, the reality for Iran's leadership is also problematic. After threatening to strangle the world oil supply through the straits of Hormuz, Iran "has boxed itself into a corner," said one Western intelligence official. "It would be quite humiliating for them to back down."

"In conclusion, we operate according to the information that Iran and Hezbollah are working hard and with great intensity to release a 'quality' attack against Israeli/Jewish sites around the world."

Click Here for the Blotter Homepage.
Also Read.
Posted by Crude Oil Daily at 12:07 AM