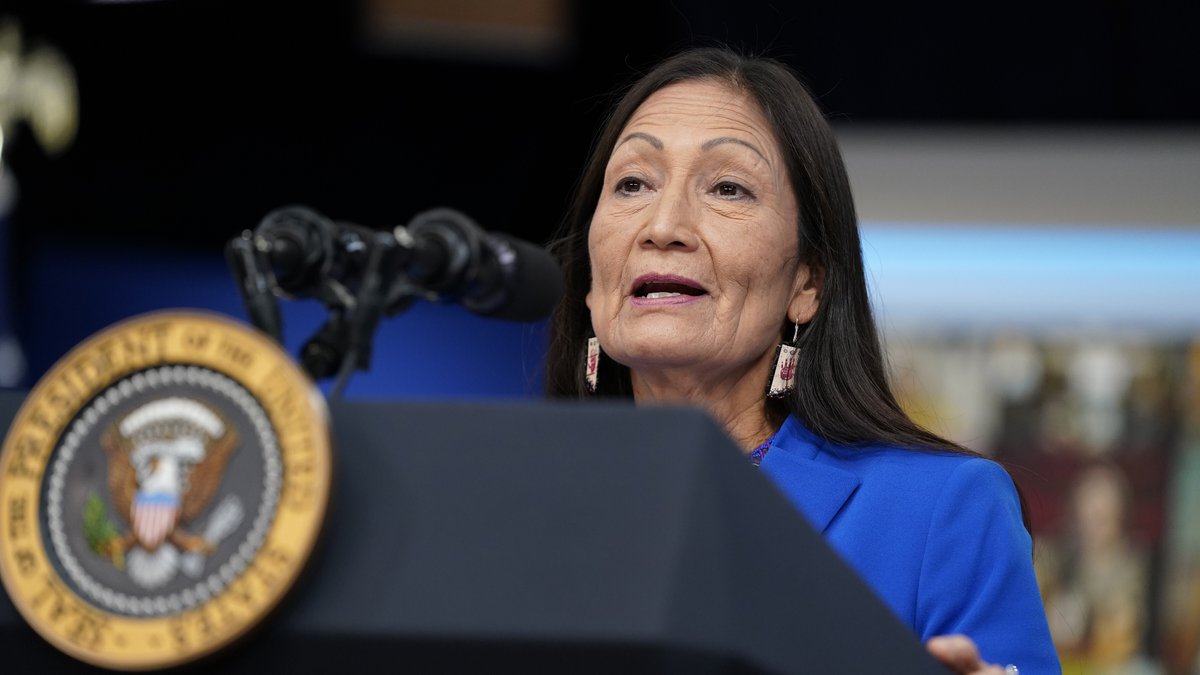 FILE - Interior Secretary Deb Haaland speaks during a Tribal Nations Summit during Native American Heritage Month, in the South Court Auditorium on the White House campus, on Nov. 15, 2021, in Washington. The Biden administration says it is canceling three oil and gas lease sales scheduled in the Gulf of Mexico and off the coast of Alaska. That will remove millions of acres from possible drilling as U.S. gas prices reach record highs.(AP Photo/Evan Vucci, File)

The Biden administration says it is canceling three oil and gas lease sales scheduled in the Gulf of Mexico and off the coast of Alaska, removing millions of acres from possible drilling as U.S. gas prices reach record highs.

The Interior Department announced the decision Wednesday night, citing a lack of industry interest in drilling off the Alaska coast and “conflicting court rulings” that have complicated drilling efforts in the Gulf of Mexico, where the bulk of U.S. offshore drilling takes place.

“Unfortunately, this is becoming a pattern — the administration talks about the need for more supply and acts to restrict it,’’ said Frank Macchiarola, senior vice president of the American Petroleum Institute, the top lobbying group for the oil and gas industry.

“As geopolitical volatility and global energy prices continue to rise, we again urge the administration to end the uncertainty and immediately act on a new five-year program for federal offshore leasing,’’ he said.

The lease cancellations come as gas prices have surged to a record $4.40 a gallon amid the war in Ukraine and other disruptions that have pushed prices $1.40 a gallon higher than a year ago. Consumer prices jumped 8.3% last month from a year ago, the government said Wednesday.

A federal appeals court in New Orleans, meanwhile, is considering a challenge to a moratorium on new federal leasing that Biden imposed soon after taking office in January 2021. Biden said the administration needed to consider the effect of new drilling on climate change and conduct proper environmental reviews.

The Biden administration failed to “grapple with prior analyses” of the planned sales to give a valid reason for postponing or canceling them, Louisiana Deputy Solicitor General Joseph Scott St. John told a 5th U.S. Circuit Court of Appeals panel this week.

The three-judge panel did not indicate when they will rule.

“To save imperiled marine life and protect coastal communities and our climate from pollution, we need to end new leasing and phase out existing drilling,” said Kristen Monsell, oceans legal director at the Center for Biological Diversity, an environmental group.

Republicans denounced the decision as harmful to consumers and U.S. national security.

The Interior Department’s decision “approaches levels of irresponsibility and reckless stupidity never seen before,’’ said Rep. Garret Graves, R-La. “We are paying record prices for gasoline and to heat and cool our homes. Rather than using American energy sources to help solve the problem and lower prices, the Biden administration continues to carry out policies that only benefit Russia, China, Iran, Saudi Arabia, Venezuela and other apparent allies of this White House.’’

The state challenge to Biden’s leasing order has not yet gone to trial, but a federal judge blocked the order in a preliminary injunction last year, writing that since federal law does not state the president can suspend oil lease sales, only Congress can do so.

The administration has appealed Doughty’s ruling, but has scheduled onshore lease sales next month in eight mostly Western states. However, the administration scaled back the amount of land offered for drilling and raised royalty rates by 50%.

Biden has come under pressure to increase U.S. crude production as fuel prices spike because of the coronavirus pandemic and the war in Ukraine. The United States and other nations have banned imports of Russian oil, driving up prices worldwide.

Biden also faces pressure from Democrats and environmental groups urging him to do more to combat climate change, even as his legislative proposals on climate and clean energy remain stalled in a sharply divided Congress.

Interior cannot conduct new offshore oil and gas lease sales until it has completed a required five-year plan. The current plan expires June 30, and administration officials have not said when or if a replacement will be released.

Interior Secretary Deb Haaland said last month that the oil and gas industry is “set” with the amount of drilling permits at its disposal. She defended Biden administration actions to scale down federal leasing, saying that industry has about 9,000 permits that have been approved but are not being used.

“The industry is free to use these permits in a way they see fit. They just haven’t acted on those,” Haaland told a House committee last week.

Oil companies have been reluctant to ramp up production, saying there are not enough workers, scant money for new drilling investments and wariness that today’s high prices won’t last.

Democrats accuse the industry of “price gouging” and have vowed to bring legislation cracking down on price manipulation to votes in the House and Senate.