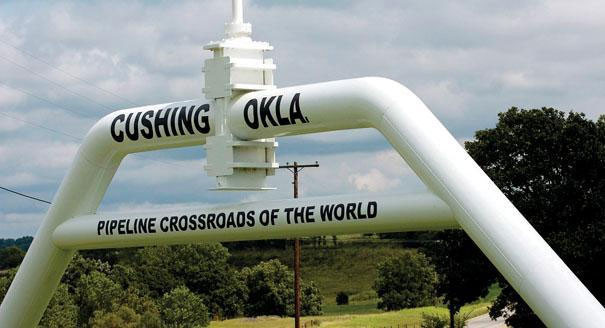 An enticing market for US crude exports, new pipelines increasing shipping options, and elevated refining demand have contributed to dwindling stockpiles at Cushing, Oklahoma. Supplies at the hub, the delivery point for the benchmark US futures contract, have nearly halved since November and now stand at a three-year low.

The accelerating drawdowns are “indicative of the simultaneous ramp-up in exports,” said Chris Kettenmann, chief energy strategist at Macro Risk Advisors LLC. US export channels coupled with increased pipeline capacity from the Permian to the Gulf Coast is “decreasing the significance of Cushing as a storage terminal or a final destination for storage.”

An end to the US crude export ban in 2015 opened global markets to booming shale production. Traders and producers are making money by moving oil to the Gulf Coast for export, instead of storing it in Oklahoma. Enterprise Products Partners LP sees US exports reaching about 4mn bpd by 2022 and Morningstar Inc sees new pipelines in the works to add to crude export capacity.

Pipelines such as the 200,000-bpd Diamond line running to Memphis, Tennessee, from Cushing combined with reduced flows on the Keystone pipeline has also led to declining stockpiles.

“Those two pipeline issues are responsible for continually diminishing inventories in Cushing,” Thomas Finlon, director of Energy Analytics Group LLC in Wellington, Florida, said. “When you add in waterborne exports, Cushing as a location should have inventories dwindle and it could be vulnerable to a squeeze.”

US refiners have been processing more crude since Hurricane Harvey hit the Gulf Coast in August, knocking key process units offline and preventing refiners from churning out product. Following the storm, Cushing inventories expanded for eight straight weeks. Refiners have been making up for the losses, ratcheting up demand since that time.

“There are obviously some clear factors involved in the drainage of Cushing stocks-very high refinery demand and new pipeline capacity,” said Harry Tchilinguirian, head of commodity markets strategy at BNP Paribas SA in London. “On the other hand, is this going to continue forever? The likelihood is no because of strong growth in domestic production driven by shale.” The latest Energy Information Administration report showed Cushing supplies fell by 3.64mn barrels, while crude production surged to a fresh record.

US Gulf Coast stockpiles mounted higher for a fourth week, the longest stretch of increases in almost a year. At the same time, US crude exports have largely held above 1mn bpd since September and are forecast to surge even higher.

New takeaway capacity is set to come online within a year that runs from the Permian to the Gulf Coast, Ashley Petersen, lead oil analyst at Stratas Advisors in New York, said in a telephone interview. “The honeymoon period has ended.”

Meanwhile, the nation’s top imports terminal is testing one of industry’s biggest tankers to load an export cargo for the first time. If the trial run signals the start of regular exports from Louisiana Offshore Oil Port, it could reshape the US export picture.