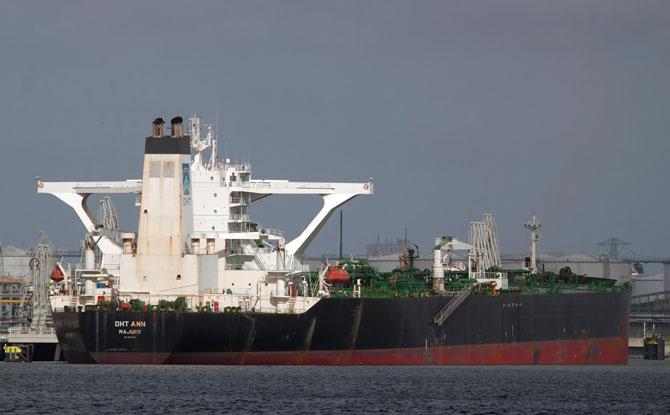 
The VLCC market remained flat during the past week for modern tonnage, as charterers focused more on older units.
These older vessels tended to be ex drydock with no SIRE, etc, which were willing to accept a tempting rebate of some WS12-15 points for east voyages, Fearnleys said in its weekly report.

The rebate closed in as the week progressed and increased resistance from owners was seen. Looking ahead, owners’ sentiment remained strong as the remaining 3rd decade cargoes were being worked. Delays were still evident in the Far East, which added further pressure.

The Suezmax market also came under pressure over the past week. Activity in West Africa slowed to a trickle and naturally the tonnage list grew allowing charterers to chip away at levels from the early WS100s down to the low WS80s.

The Black Sea and Med weather delays were minimal and again cargo activity was been scarce allowing TD6 to fall sharply to WS90.

Current market conditions are bucking the normal 4Q17 more healthy market trend and owners are running out of time with December dates rapidly approaching. It is going to take a large volume of cargoes to soak up the current tonnage back log, Fearnleys said.

However, a higher oil price is pushing up the bunker costs, which in turn is eroding earnings. This could be the brake to stop further rate slippage ahead.

Aframaxes trading in the North Sea and Baltic experienced an ongoing decrease in rates this week. Less cargo activity, coupled with an oversupply of available tonnage, gave charterers the upper hand and an opportunity to push down rates.

Going forward, we see an even further downside before the market will firm again.

Last week, owners in the Med and Black Sea were holding out for high numbers. But as the market fundamentals pointed towards a softer market, the only thing keeping rates at such high levels was owners’ persistence.

By the start of this week, owners realised the list of available tonnage was too long to play hard to get, and caved in one at the time. The market has now dropped WS40 points and we could see it going below WS100 by the end of this week, Fearnleys concluded.

While the ongoing rally in crude prices is underpinned by fundamentals, such as robust demand growth, ongoing OPEC supply cuts and falling US crude inventories, growing tensions in the Middle East have been playing an increasingly significant role.

With Iraq seizing control of the disputed Kirkuk region on 16th October, Brent crude futures jumped to a three-week high of $57.82 per barrel, as production at two major oilfields was shut. According to Bloomberg, Kurdish crude exports fell by around 300,000 barrels per day in October, due to supply disruptions.

Spurred by the sudden and unexpected purge in Saudi Arabia, oil prices surged to their highest in two and a half years, as Brent crude futures crossed the $64 per barrel mark on Monday.

The anti-corruption crackdown is viewed by many as a move by Crown Prince Mohammed bin Salman to further consolidate his power at home, as he pushes through major reforms, such as ‘Vision 2030’, which includes the Saudi Aramco IPO.

Concerns over potential instability in the Kingdom and investment climate have added a geopolitical risk premium to oil prices.

If anything, the Saudi purge can be viewed as bullish for oil prices as it further cements Saudi Arabia’s commitment to reduce the global glut. Crown Prince Mohammed bin Salman has made his stance on extending the ongoing OPEC cuts of 1.8 mill barrels per day clear, as higher oil prices would benefit the IPO, OFE said.

The rollover of the OPEC production curbs for the whole of 2018 is likely to further delay any significant recovery in the tanker market, which is already facing headwinds from persistent overcapacity.

Lower cargo volumes ex-AG have contributed to the drop in average VLCC earnings this year, which are currently around 40% less than that of 2016. The backwardated market structure has also led to the ongoing decline in VLCC floating storage, which has released more tonnage into the trading fleet, OFE concluded.

Meanwhile, the 2006-built MR ‘Pretty Scene’ is due to be publicly auctioned at Durban, South Africa on 5th December this year.

Bowman Gilfillan is handling the auction, which has materialised as a result of a judicial arrest.

Monjasa has confirmed that it is to charter an SKS Tankers Holding ‘D’ class Aframax.

Several advanced technical features and the ability to load, discharge and blend multiple grades of cargo simultaneously, made this vessel an interesting proposition, the company said.

Group CEO, Anders Østergaard, explained:“It’s a pioneering move to apply an SKS D-class tanker as a floating storage and this first-class vessel becomes the largest ever member of Monjasa’s fleet.

"The aim is to strengthen the backbone of our West Africa logistics and offer more flexibility for our customers taking bunkers in the region. For this purpose, we see her as an excellent solution for current and future trading requirements,” he said.

The vessel has six double valve segregations and is equipped with Framo deepwell cargo pumps for each individual tank.

Monjasa will take delivery of the vessel in Europe, and she will be fully operational off West Africa during December, 2017.

In other chartering news, Koch was said to have fixed the 2011-built VLCCs ‘Maersk Heiwa’ and ‘Mercury Hope’ for two years at $29,000 per vessel.

In the S&P sector, Greek interests were said to have taken the newbuilding Suezmax ‘RS Aurora’ for an undisclosed fee, while Aegean was thought to have bought the 1999-built Aframax ‘Althea’, which brokers said was an old sale.

Central Shipping was believed to have ordered one, option one MR at Hyundai Mipo for a reported $32-$35 mill per ship and delivery in 2019.