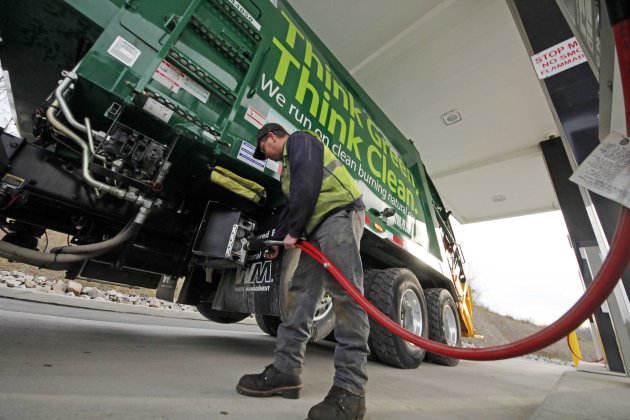 SCRANTON, Pa. (AP) — If the trash truck or bus rolling down your street seems a little quieter these days, you're not imagining things. It's probably running on natural gas.

Surging gas production has led the drilling industry to seek out new markets for its product, and energy companies, increasingly, are setting their sights on the transportation sector.


Touting natural gas as a cheaper, cleaner-burning alternative to gasoline and diesel, drillers, public utilities and government officials are trying to boost demand for natural gas buses, taxis, shuttles, delivery trucks and heavy-duty work vehicles of all sorts, while simultaneously encouraging development of the fueling infrastructure that will be needed to keep them running.


The economics are compelling. Natural gas costs about $1.50 to $2 per gallon equivalent less than gasoline and diesel. That can add up to tens of thousands of dollars in savings for vehicles that guzzle the most fuel.


Fleet managers are taking notice. Companies as diverse as AT&T, Waste Management and UPS are converting all or parts of their fleets to natural gas, as are transit agencies, municipalities and state governments.

"Now that you can save a dollar or two dollars a gallon, there's huge interest in the market, especially in those fleets that use a lot of fuel," said Richard Kolodziej, president of the trade group Natural Gas Vehicles for America.


Waste Management, the nation's largest trash hauler, has committed to replacing 80 percent of its fleet with trucks powered by natural gas. Rich Mogan, the company's district manager in southwestern Pennsylvania, said about half of his fleet of 100 trucks now run on the cheaper fuel. They are quieter and less expensive to maintain, he said, and "we are looking at a 50 percent reduction in our (fuel) cost."


Driller EQT Corp. opened its own natural gas filling station outside Pittsburgh in summer 2011, using it to refuel its trucks while also making it available to the public. It's now doing about 1,000 fill-ups a month — and only half involve EQT vehicles. Other users include City of Pittsburgh trash trucks, shuttles run by the University of Pittsburgh Medical Center, a taxi service and a handful of consumers.


EQT wasn't sure how the station would be received.


"We didn't have commitments at all beyond our own vehicles. It was really a guess of what we think we could do," said David Ross, an EQT vice president focused on market development. "We had people who, at the beginning, said, 'No, we're not interested.' Today they actually own a vehicle that's natural gas. I think having the physical asset sitting there has helped it become real for people."
Natural gas vehicles aren't new. But the drilling boom — spurred by new technology that unlocked vast reserves of natural gas in deep rock formations like the Marcellus Shale underneath parts of New York, Pennsylvania, West Virginia and Ohio — created a gas glut that depressed prices. That, in turn, has made natural gas more attractive as a transportation fuel.


Partly because of a lack of fueling infrastructure, gas isn't expected to grab significant market share from petroleum anytime soon. Only a tenth of 1 percent of the natural gas consumed in the Unites States last year was used as vehicle fuel, according to the U.S. Department of Energy. Of more than 250 million vehicles on the road today, perhaps 125,000 are powered by natural gas.
But energy companies see potential.


Chesapeake Energy Corp., the nation's No. 2 producer, has been especially aggressive about targeting transportation. The Oklahoma City-based driller invested $150 million in Clean Energy, a company backed by Texas investor T. Boone Pickens that's building a nationwide network of liquefied natural gas refueling stations for long-haul truckers. Chesapeake also teamed up with General Electric on "CNG In A Box," a compressed natural gas fueling system for retailers; announced a partnership with GE and Whirlpool to develop a $500 appliance that would allow consumers to refuel their natural gas-powered cars at home; and has been working with 3M to design less expensive tanks.


States are also promoting natural gas as a transportation fuel. Nearly two dozen state governments have formed a consortium to add natural gas-powered vehicles to their fleets, an effort launched by the governors of Oklahoma and Colorado that attracted more than 100 bids from dealerships last month.

Separately, the Pennsylvania Department of Environmental Protection is dangling $20 million worth of incentives to goose the market for medium- and heavy-duty natural gas vehicles. The three-year program, which launches Dec. 1 and is funded by a state fee on drillers, aims at putting 600 to 700 new natural gas-powered trucks and buses on the road in its first year.


State officials also hope to use the grant program to spur a network of new filling stations. Pennsylvania has only 14 publicly available stations, and more places to fill up could help stoke consumer demand.

"The big prize here is to get consumers purchasing vehicles that run off natural gas," said Geoff Bristow of the Pennsylvania DEP.

Industry officials, though, acknowledge that's a long way off.


Conventional gasoline engines are becoming more efficient, and consumers might balk at spending more on a natural gas-powered car. Plus, the United States has less than 600 natural gas filling stations available to the public, compared with 160,000 gas stations.


The only factory-made, natural gas-powered passenger car available to U.S. consumers is the Honda Civic Natural Gas. While Honda expects sales to top 2,000 this year, that's a fraction of the number of gasoline-powered Civics it moves in a single month.


"There is very little interest in natural gas for cars," Omotoso said. "People looking for alternatives are looking at hybrids and electric vehicles."


For now, the gas industry is concentrating on heavy trucks and buses, vehicles that ply a regular route and return to the same base to fill up.


But both Kolodziej and Norman Herrera, Chesapeake's director of market development, see a future where natural gas-powered cars and SUVs are commonplace and "you have a market like transit and trash, where all the pieces are in place and all the bottlenecks have been resolved," Herrera said.
Posted by Crude Oil Daily at 5:53 PM