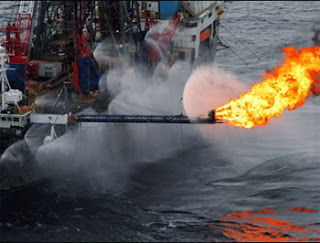 Ghana’s oil production is expected to inch up from the current 80,000 barrels a day to 90,000 by the end of the third quarter of 2012, representing a 6 per cent increase year on year.

According to Renaissance Capital’s latest research report made available to CITY & BUSINESS GUIDE, it still sees an upside for oil production over the next four quarters given that it is projected to peak at 120,000 barrels per day in 2013 by Tullow Oil.

He stated that the increase was partly due to the successful oxidation exercise which was carried out to boost production.

Oxidation is the process of involving the injection of acid into wells to facilitate the oil flow to the surface or onto an oil platform.

Renaissance Capital’s report further projected that stronger growth from the extractive industry in the second half of 2012 barring any hitches in the gold mining sector.

“This is positive for the industrial sector, which we expect to remain supported by robust growth in construction activity.”

However, according to the report this growth is expected to be undermined by a poor showing from the manufacturing sector in the third quarter of 2012 due to another shutdown at Tema Oil Refinery related to the breakdown of critical equipment.

On the services front, business services’ growth is also expected to remain robust.
It is also anticipated that election-related spending would support the services growth in fourth quarter of 2012.

The report stated that “we maintain our Growth and Domestic Product (GDP) growth projection for Ghana of 8.5 percent in 2012 however we think downside risk to this has increased.”

By Esther Awuah
Posted by Crude Oil Daily at 11:45 AM