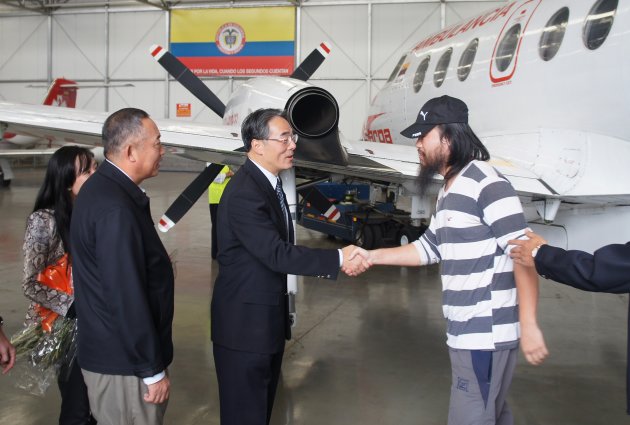 Asked whether a ransom was paid for the men's release, Chinese Ambassador Wang Xiaoyuan told reporters in Bogota that "a ransom was not even demanded." He said no one ever claimed responsibility for the kidnapping.
He did not explain how the men's release was accomplished.

Colombian officials said they had no doubt the FARC was behind the kidnapping and said the handover was arranged by the Chinese Embassy and the International Red Cross
State police chief Col. Carlos Vargas said the four were released in good shape in a rural area of San Vicente del Caguan, a FARC bastion.
The country chief of the International Committee of the Red Cross, Jordi Raich, told reporters the four were freed by a small group of unarmed men in civilian clothing. He said the freed oil workers all appeared in good health though one appeared to have difficulty walking and would surely be given a medical checkup.
Images of them taken by a local TV network showed the men, bearded and with long hair, wearing hats in San Vicente early Thursday. One was in a wheelchair
Employed by the British company Emerald Energy, which is part of the China-based Sinochem Group, they were seized June 8, 2011, while engaged in oil exploration work.
The men's driver, who was released with their vehicle, said they were taken by at least seven FARC rebels.
Authorities identified the freed men as Tang Guofu, 28, Zhao Hongwei, 36, Jian Mingfu, 46, and Jiang Shan, 24. They said Jiang was the translator.
The men were flown to Bogota on a plane chartered by the Chinese Embassy. Ambassador Wang said they would fly home to China on Friday.
Wang has said the embassy had never received any proof-of-life evidence for the four men and that neither their relatives nor the company had contact with them.
The FARC said in early September, when it and the government announced the beginning of formal peace talks, that it no longer held any kidnap victims.
Yet the citizen's group Pais Libre, which tracks kidnap victims, claims the rebels have kidnapped at least a dozen people this year and that dozens more abducted in previous years remain unaccounted for.

Defense Minister Juan Carlos Pinzon took the opportunity to accuse the FARC of being "a mendacious and traitorous organization" that "lies to the country and the international community.
"We have already become accustomed to hearing a lie every time they pick up a microphone," he told a gathering Thursday at a police operations center in Tolima state, according to the ministry's website.
Pinzon used equally harsh rhetoric Monday in reacting to the FARC's announcement of a unilateral two-month cease-fire that began the following day.
___
Associated Press writers Vivian Sequera in Bogota and Frank Bajak in Lima, Peru, contributed to this report.
Posted by Crude Oil Daily at 9:38 PM