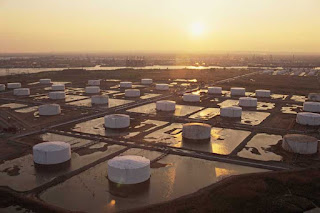 Distillate supplies, which include heating oil and diesel, fell 309,000 barrels to 119.5 million. Stockpiles were estimated to decrease 500,000 barrels.

Oil also fell as European Union leaders are gathering in Brussels tnnight to discuss the euro-region's debt troubles and after Iran agreed to grant access to United Nations nuclear inspectors.
The summit is the 18th since Greece was convulsed by debt and the first since an anti-austerity campaign carried Francois Hollande to France's presidency.

German Chancellor Angela Merkel is facing calls for measures she opposes, including euro bonds, the use of European money to recapitalize banks, a bigger rescue fund and extra time for debt-swamped countries to cut spending.

"The moves in just about all the markets are related to what's going on in Europe," said Phil Flynn, an analyst at futures brokerage PFGBest in Chicago. "There's a little bit of optimism that the Iran talks will succeed."

The International Atomic Energy Agency will be given access to Iran's Parchin military complex, Director General Yukiya Amano said yesterday. World powers resumed talks with officials from the Islamic republic in Baghdad today. Iran is suspected by the U.S. and its allies to have worked on the trigger for an atomic bomb at Parchin.

The Baghdad talks between Iran and the U.S., U.K., France, Russia, China and Germany follow an April 14 gathering in Istanbul where the sides failed to produce an accord. Discussions last month were described as "constructive." The talks will extend into a second day tomorrow, Iranian state-run Press TV reported without saying where it got the information.