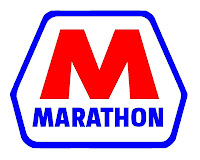 The acquisition will see Marathon take over the company's operations in the Eagle Ford Shale, Texas. Paloma Partners owns around 17,000 acres of land in the counties of Karnes and Live Oak where it produced around 7,000 barrels per day of oil equivalent as of 1 April.

The acquisition is expected to be finalised by Q3 2012.

Houston-based Marathon recently announced that it is looking to invest $767 million in new projects located in the Eagle Ford Shale following the sale of assets in Alaska.

These new ventures include the acquisition of 13 operational wells, in addition to nine more wells that have been drilled and are awaiting completion.
Posted by Crude Oil Daily at 8:53 AM