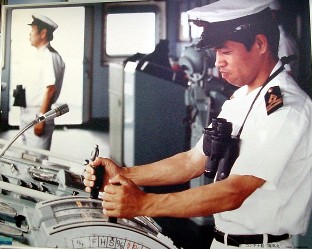 Major advances in the scientific understanding of the way in which watchkeeping patterns can affect the sleepiness levels of ships’ officers have been claimed in a new report, following a major research project.

‘Project Horizon’ was an 11-partner European, 32-month research study, part funded by the EU, that brought academic institutions and shipping industry organisations together, with specialist input from some world-leading transport and stress research experts.

The project made use of bridge, engine room and cargo simulators to assess scientifically the impact of fatigue in realistic seagoing scenarios.

The main scenario involved a simulated two round trips between Fawley and Rotterdam on a 40,000 dwt products tanker loaded with two grades of cargo one way and returning in ballast. The two ‘voyages’ lasted for seven days.

A total of 90 certificated deck and engineer officer volunteers with tanker experience participated in rigorous tests at the Gothenburg Chalmers University of Technology and at Warsash Maritime Academy, part of Southampton Solent University, to measure their levels of sleepiness and performance during the most common watchkeeping patterns – four hours on/eight hours off (4/8) and six hours on/six hours off (6/6).

Some of those taking part in Gothenburg were also exposed to a ‘disturbed’ off-watch period, reflecting the way in which seafarers may experience additional workloads, as a result of port visits, bad weather, or emergencies.

Researchers have used the data collected to develop a new fatigue management toolkit (Fatigue Risk Management Systems) for use by shipowners and managers, seafarers, regulators and others, to help arrange working schedules to mitigate risks to ships and their cargoes, seafarers, passengers and the marine environment.

Project co-ordinator Graham Clarke said: “Seafarer fatigue is one of the biggest safety issues in the shipping industry and this research has taken our understanding of the way in which the quality of sleep off-watch affects the sleepiness of watchkeepers on watch to a new and much deeper level.

“It is hoped that the fatigue management toolkit will be a lasting legacy for the sector, providing a resource that, by establishing improved working patterns, will help to enhance the safety of ships and passengers and the welfare of seafarers,” he concluded.

An in-depth look at the key findings will be published in the March issue of Tanker Operator Magazine.
Posted by Crude Oil Daily at 8:43 PM