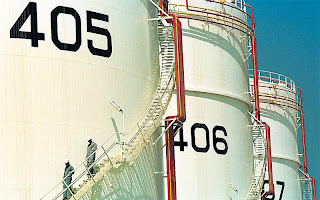 The facility, which sits on approximately 250 acres on the Arthur Kill in Perth Amboy, New Jersey, has over four million barrels of tankage, four docks, and significant undeveloped land available for potential expansion.

The facility has water, pipeline, rail, and truck access, and is located only six miles from Buckeye's Linden, NJ complex. The acquisition, which is subject to certain closing conditions, is expected to close in the latter half of the second quarter of 2012.

As a result of the acquisition, Buckeye's inland pipeline and terminal networks will have a direct connection to a Buckeye owned and operated marine facility with water access to petroleum products imported from international and Gulf Coast suppliers. Additionally, the Perth Amboy facility will provide a link between Buckeye's inland pipelines and terminals and Buckeye's BORCO facility in The Bahamas, improving service offerings for Buckeye's customers and providing further support to Buckeye's planned clean products tankage expansion at the BORCO facility.

‘Direct access to waterborne cargos will ensure security and diversity of product supply into the Buckeye system, and is part of a long-term strategy designed to provide sustainability and optionality for further growth in Buckeye's domestic and international businesses,’ says Clark Smith, Buckeye's CEO.

Smith notes that Buckeye has near-term plans to transform the existing terminal operations at Perth Amboy into a highly-efficient, multi-product storage, blending, and throughput facility, through the investment of approximately $200-225 million of growth capital into the facility over the next three years.

‘We expect to realise significant commercial and operational synergies by adding a marine terminal in New York Harbor to our existing pipeline and terminal assets in the region,’ added Mr. Smith. ‘The Perth Amboy facility will allow Buckeye to play an integral role in connecting waterborne imports with end-destination markets beyond New York Harbour. We expect the transaction, which is supported by multi-year storage, blending, and throughput commitments from Chevron, to be accretive to distributable cash flow per unit in 2013.’

Buckeye intends to expand its capabilities to serve the Northeast markets through the construction of a new 16’ pipeline between the Perth Amboy facility and Buckeye's Linden, New Jersey complex and an expansion of Buckeye's existing pipelines running from Linden, New Jersey into the Pennsylvania and New York markets.

Morgan Stanley acted as the exclusive financial advisor to Chevron in connection with this transaction.
Posted by Crude Oil Daily at 8:41 AM