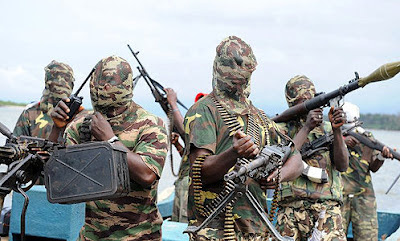 The group, which has been silent for about a year now also claimed responsibilty for the attack at Ogbobagbene in Burutu local government area of Delta State, on the compound of Godsday Orubebe, Minister for Niger Delta two weeks ago.

A statement released by MEND to www.thetimesofnigeria.com and other international media organizations states:

“On Saturday the 4th of February at 1930hrs, fighters of the Movement for the Emancipation of the Niger Delta (M.E.N.D) attacked and destroyed the Agip trunk line at brass in Bayelsa State in the Niger Delta region of Nigeria.

“This relatively insignificant attack is a reminder of our presence in the creeks of the Niger Delta and a sign of things to come.

“We have constantly warned Nigerians about Goodluck Jonathan and his train of idiots running Nigeria. Events of the last few months have vindicated our position on the inability of this moron to lead Nigeria anywhere but downwards.

“Rather than address serious issues facing the nation and its citizens, Goodluck Jonathan squanders public funds on tribalistic sycophants and thugs calling themselves ex-militants.

“Nigerians should disregard the idle threats and ranting of imaginary militant groups and other hired “Jonathan praise singers”. Besides empty talk, they are unable to help Jonathan in any way. In fact most so called ex-militants are hiding in Abuja or Lagos, not venturing near their villages in the Niger Delta.

“Our silence thus far, has been strategic and at the right time, we will reduce Nigerian oil production to zero and drive off our land, thieving oil companies. British petroleum is prepared to pay $25 billion compensation for the Gulf of Mexico oil spillage, yet for worse spillages in the Niger Delta; our people are paid with death at the hands of the Nigerian military.

“In the dark days to come, MTN, SACOIL, and other South African investments will pay a heavy price for the interference of Jacob Zuma in the legitimate fight for justice in the Niger Delta, by its people. The South African President has reduced himself to the position of a hired thug for Goodluck Jonathan.

“The Movement for the Emancipation of the Niger Delta (M.E.N.D) understands the negative impact our assault on the Nigerian oil industry will have on the ordinary citizen in a country which relies almost entirely on one source of revenue.

“Unfortunately, the extremely irresponsible, floundering government of Nigeria is more concerned with enriching themselves and family members than attending to the problems of the Niger Delta and the continuously depreciating standard of living of the ordinary Nigerian.

“A government incapable of managing roads, refineries, power stations and other basic infrastructure is again squandering valuable public funds on a committee tasked with investigating the viability of nuclear energy for electricity generation.

“The government of Nigeria is incapable of safely disposing household refuse. How then do they plan to deal with the toxic by-product of nuclear energy? Nigerians must know that their ignoramus of a president is controlled by Obasanjo, Western nations, an imbecilic wife and an army of sorcerers.

“In this new phase of our struggle for justice, the Movement for the Emancipation of the Niger Delta (M.E.N.D) will pay considerable attention to dealing with security forces and traitorous indigenes of the Niger Delta.

“In this regard, MEND wishes to confirm that our fighters were responsible on the attack at Ogbobagbene in Burutu local government area of Delta State, on the compound of Godsday Orubebe, Minister for Niger Delta.

“The general public is again advised to take very seriously, any warnings of impending bombings. Such warnings will always precede a bombing, providing sufficient time for evacuation.

“Specific members of the security services and the media will in addition to email, receive notification of an impending attack, by SMS in order to minimize the possibility of civilian casualties.” The statement was signed by Jomo Gbomo.
Posted by Crude Oil Daily at 9:28 PM