After Republicans Win the House, Will They Investigate Hunter Biden’s China Connections? 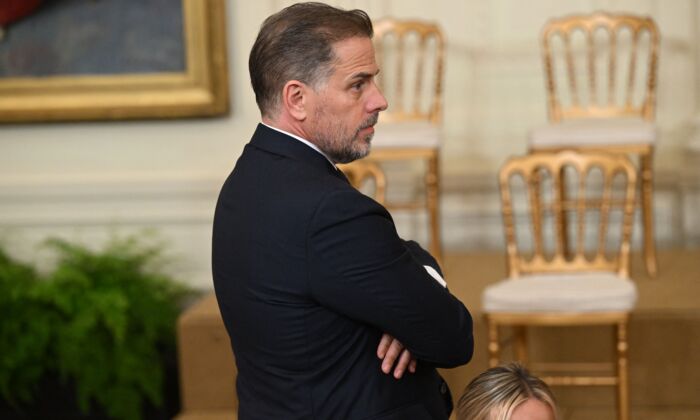 Hunter Biden attends a Presidential Medal of Freedom ceremony honoring 17 recipients, in the East Room of the White House in Washington, on July 7, 2022. (Saul Loeb/AFP via Getty Images)

With Republicans regaining control over the House the focus is on if and how the promised investigations by lawmakers will materialize.

Prior to the Midterms, Republican lawmakers promised investigations into a variety of topics, such as COVID-19, the economy, the border crisis, as well as the foreign business dealings of President Joe Biden’s son, Hunter Biden.

This article revisits what we know specifically regarding Hunter Biden’s activities in China and Ukraine, much of which came to light through the discovery of his laptop.

Through emails contained on this laptop, we learned that Hunter Biden was directed by the head of the board of directors of Ukrainian company Burisma to stop an active investigation into Burisma and its owner, Mykola Zlochevsky.

We also know that soon after, Joe Biden, then vice president, demanded from Ukraine’s president Petro Poroshenko the firing of Ukrainian prosecutor Victor Shokin, who was overseeing the Burisma investigation.

But Hunter Biden’s involvement with Burisma and Ukraine is just one small part of the Biden family’s foreign dealings.

Of particular note are Hunter Biden’s early, and ongoing, involvement with companies directly tied to the Chinese Communist Party (CCP)—ties that began over a decade ago.

Chris Heinz is the stepson of former Secretary of State John Kerry. Archer, a longtime Heinz and Kerry friend, was a fundraiser for Kerry’s 2004 presidential campaign. Rosemont Capital contained several funds, with Rosemont Seneca being the most important of these entities.

Rosemont would soon partner with the Thornton Group—headed by James Bulger, the nephew of former mob figure James “Whitey” Bulger. In 2010, Hunter Biden and Devon Archer traveled to China to “explore the possibility of commercial cooperation and opportunity.”

They apparently found plenty of opportunities.

According to Peter Schweizer, head of the Government Accountability Institute, the Thornton Group’s account of the meeting on their Chinese-language website was telling: Chinese executives “extended their warm welcome” to the “Thornton Group, with its US partner Rosemont Seneca chairman Hunter Biden (second son of the now Vice President Joe Biden).”

During their visit, Hunter Biden and Archer met with the most powerful government financiers in China despite Rosemont being a small firm with no track record. Their trip was particularly timely, occurring just hours before Joe Biden met with then-Chinese leader Hu Jintao in Washington as part of a Nuclear Security Summit.

Interestingly, it was Hu who was unexpectedly escorted out of the CCP Congress in October of this year.

In 2011, there was a second meeting between Rosemont Seneca and the same Chinese government fund managers. This time, the meeting took place in Taiwan. And once again, the timing of their meeting was auspicious as it took place just two weeks after Joe Biden had opened up a U.S.-China strategic dialogue with Chinese officials in Washington.

In December 2013, Hunter Biden flew with his father to China on Air Force Two. The vice president was meeting with the CCP’s new leader, Xi Jinping. During the visit, Hunter Biden helped arrange for Jonathan Li, CEO of Bohai Capital, a subsidiary of the Bank of China, to ‘shake hands’ with Vice President Biden.

The deal was later increased to $1.5 billion. Funding came from the Bank of China and the China Development Bank—both of which are owned by the Chinese regime. The regime held an 80 percent stake in the joint venture and Hunter Biden received a 10 percent stake in the newly formed Bohai Harvest RST.

Notably, each of Hunter Biden’s early trips to China coincided with strategic foreign policy meetings between his father and the Chinese authorities. Shortly after he left the vice presidency Joe Biden wrote a recommendation letter for Li’s son to attend an Ivy League university in the United States.

Shortly after the formation of Bohai, on April 16, 2014, Joe Biden met at the White House with Hunter Biden’s business partner, Devon Archer. It isn’t known what was discussed at that meeting, but on April 21, 2014, Joe Biden traveled to Ukraine, offering not only his political support, but also $50 million in aid for Ukraine’s shaky new government.

During Joe Biden’s Ukraine visit, on April 22, 2014, it was announced that Archer had joined the board of Burisma. Hunter Biden also joined Burisma’s board sometime that month, although Burisma didn’t announce his appointment until May 12, 2014.

Hunter Biden had developed a unique habit of turning up in regions where his father, the vice president, was conducting foreign policy meetings—and then appeared to have been turning those visits into a variety of profitable business ventures.

According to a September 2020 Senate Report, sometime in 2015, Hunter Biden’s contacts with Chinese businessman Ye Jianming began in earnest. Ye was the founder of CEFC China Energy and a frequent figure in the Biden family’s financial dealings with China.

Ye was also chairman of the board for CEFC’s subsidiary, the China Energy Fund Committee. Although CEFC reportedly remained a “private company” until state-owned enterprises assumed control of it in 2018, the company received financing from the China Development Bank, “hired a number of former top officials from state owned energy companies,” and had “layers of Communist Party committees across its subsidiaries.” The company was also reported to have had “intelligence ties” within China. The company was effectively controlled by the Chinese regime.

CEFC was a large, fast-growing company with the backing of the Chinese regime–ranking #229 on the Global Fortune 500 list in 2016, with $42 billion in revenue in 2015. The company owned several thousand gas stations in Europe, many of which were purchased from Kazakhstan’s state oil company. CEFC also owned a million-ton oil storage system in Spain and France that served as a major conduit that extended China’s connections with the world oil supply. CEFC was an integral part of Xi’s Belt and Road Initiative, which was designed to spread China’s influence and control across the world. Ye was dubbed the “Belt and Road billionaire” in the press.

In December 2015, Ye flew to Washington and apparently met with Hunter Biden—a recent report by Sens. Chuck Grassley (R-Iowa) and Ron Johnson (R-Wis.) noted that an entry in Hunter Biden’s diary listed a scheduled meeting with Ye on Dec. 7, 2015. One of Hunter Biden’s former associates told the New York Post that Hunter Biden brought Ye to a Christmas party in order to introduce him personally to Joe Biden.

Around this same time, future whistleblower Tony Bobulinski entered the picture. He had been brought in by James Gilliar, a long-time associate of Hunter Biden’s. Gilliar had told Bobulinksi he needed his help in structuring a joint venture for the Biden family, Hudson West III. A few months later, in March 2016, Gilliar disclosed the proposed partner for the company CEFC, telling Bobilinski, according to a New York Post report, “This is the capital arm of one belt, one road.”

Hunter Biden’s associations with Ye would continue into early 2018 when Ye was detained by the Chinese authorities and disappeared from public view. Grassley and Johnson noted in their report that “records obtained by our offices show that Ye became very close with Hunter Biden.”

In February 2017, Hunter Biden and Ye met at a hotel in Miami, where Ye offered the younger Biden $10 million a year for three years for “introductions alone.” It was at this same meeting that Ye presented Hunter Biden with a 3.16 carat diamond with an estimated value of $80,000.

As Grassley and Johnson note in their report, “nine days later, on February 23, 2017, a Shanghai based company … that was affiliated with CEFC China Energy, sent a $3,000,000 wire” to Robinson Walker, a company associated with Hunter Biden’s business associate, Rob Walker.

Another $3 million was sent on March 1, 2017. Although it is not yet known with precision what happened with the $6 million, it is known that Hunter Biden received regular payments from Walker’s company, along with more than $500,000 from Walker directly. Both of the $3 million wire transfers were flagged by the Department of Treasury’s Financial Crimes Enforcement network in a “suspicious activity report.”

In August 2017, Hudson West III was officially formed with Ye injecting $5,000,000 in capital. Hunter Biden contributed no capital to the new venture, although he owned 50 percent of the new company. The operating agreement of Hudson III stipulated that Hunter Biden would receive $100,000 per month and Joe Biden’s brother, James, would receive $65,000 per month. Hudson West also made large credit card payments for items purchased by the Bidens. The Bidens appeared to provide one service for all the cash they were receiving—assistance in attempts to gain U.S. Visas for Ye and his family.

In November 2017 a payment from CEFC to Hudson West of $1 million was made. A few months later, Hunter Biden’s private company, Owasco, was paid $1 million in order to represent Patrick Ho, a business associate of Ye’s who would later be “charged and convicted of international bribery and money laundering offenses stemming from his work for the CEFC-backed China Energy Fund Committee,” according to the Senate report. Ho is the individual that Hunter Biden would later refer to in an email as “the [expletive] spy chief of China.” At the time of Ho’s arrest in the United States, his first call was to James Biden, who would later claim Ho’s call was intended for Hunter Biden.

After the formation of Hudson West, Hunter Biden hired a woman named JiaQi (Ja-Chi) Bao. Her involvement with Hudson West was far more extensive than initially thought. According to a letter sent by Representative James Comer (KY-R), “Documents obtained by Committee Republicans reveal that Bao was also working for CEFC employees linked to the CCP.” Comer noted that Bao “appeared to be effectively running the joint venture under Hunter Biden’s name. She produced yearly reports and business plans for Hudson West III, the joint venture Hunter Biden created with the Chinese firm, CEFC.”

When CEFC’s Ye was detained in China in March 2018, Bao sent Hunter Biden an email explaining that “Ye’s situation changed” and that Hunter Biden needed to take as much money as he could from Hudson West III because if he failed to do so, the money would become “nobody’s money.” At the time of Bao’s email to Hunter Biden, Hudson West III still had about $3.5 million in the company’s account. Comer also noted that Bao encouraged Hunter Biden to push his father to run for president “months before he announced and then supplied the Biden family campaign advice related to China.”

As a final postscript to this story, in September 2018, Hunter Biden’s own bank sent an email asking some very pointed questions about the incoming wire transfers from Hudson West to the Bidens. Now we will see if the House Republicans follow through on their promises of a full investigation.