Exxon’s Mega Oil Finds In Guyana Are Just The Beginning

Like many global oil majors ExxonMobil is under considerable pressure because of the significant fallout from the COVID-19 pandemic, sharply weaker oil prices and the threat of peak oil demand. There are growing fears that Exxon, because of its tremendous debt burden, is a zombie company. These are generally companies that are not generating sufficient operating income to cover its interest expenses. While Exxon is struggling because of the prolonged slump in oil prices reporting a $2.4 billion loss for the first nine months of 2020 and deteriorating cashflow it is not yet a zombie company. The global oil supermajor has several levers at its disposal to boost profitability and cash flow, key being the improved outlook for oil prices along with Exxon’s globally diversified portfolio of quality energy assets. In response to sharply weaker oil prices and the need to boost profitability Exxon announced during November 2020 that it intended to prioritize capital spending for high value assets, key among them being its operations in the Guyana-Suriname Basin located in offshore South America.

Exxon made its first Guyana oil discovery in the offshore Stabroek Block during May 2015. By December 2019, the integrated energy major had commenced production at the Liza oilfield with the capacity to pump 120,000 barrels daily. During September 2020, Exxon made its 18th oil discovery in the Stabroek Block and upgraded its estimate of recoverable oil resources to more than 8 billion barrels. 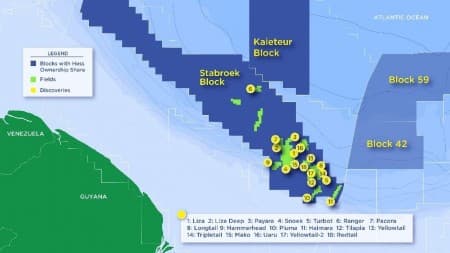 That month Exxon announced it will proceed with developing the Payara oilfield, in the Stabroek Block, which will come on-line in 2024 possessing the capacity to pump 220,000 barrels daily. By December 2020 Exxon had achieved its production goal for the Liza field and the company anticipates producing more than 750,000 barrels daily from the 6.6-million-acre Stabroek Block by 2026.

This is a highly profitable asset for the integrated oil major, even with weaker oil prices, because of its particularly low breakeven costs. According to partner Hess, which has a 30% interest in the block alongside Exxon’s 45% and CNOOC's 25%, the Liza oilfield is pumping crude oil at a breakeven price of $35 per barrel, and this will fall further. Hess claims that the breakeven price for the second FPSO to be deployed, Liza Unity which is scheduled to commence operations in 2022, will pump crude at an even lower breakeven price of around $25 per barrel. With an API gravity of 32 degrees and 0.58% sulfur content, the crude oil produced from the Liza field is relatively easily and cost effectively refined into high quality low sulfur content fuels. That will ensure that it does not sell at a significant discount to the international Brent price benchmark.

Exxon secured a favorable production sharing agreement (PSA can be viewed here) with Guyana’s government for the Stabroek Block. There was an $18 million signing bonus with only 2% royalties payable on the oil produced and a 50% profit sharing clause, which only applies once 75% of exploration and development costs have been recovered. That makes Exxon’s operations in the Stabroek Block highly profitable even if oil prices remain weak and Brent trades at around $50 per barrel, making it a key source of revenue as production grows. The PSA has attracted considerable criticism as being too generous. While the government of Irfaan Ali, who was sworn in during August 2020 bringing an end to Guyana’s electoral crisis, pledged to review the PSA thus far it has baulked at renegotiating the agreement. In fact, during September 2020 Ali’s government granted the necessary approvals for Exxon’s Payara project to proceed. The benefit for Guyana, which has suffered significantly because of the COVID-19 pandemic, is tremendous. The IMF predicted that the former British colony’s gross domestic product expanded by an impressive 26% during 2020, despite many other countries suffering recessions because of the pandemic. Guyana’s economy will then grow by an additional 8% during 2021. Industry consultancy Rystad Energy anticipates this will cause government revenues to surge more than 30-fold over the coming decade as the oil boom, spearheaded by Exxon, gains momentum.

There are further indications that this is merely the start of what will become a vast oil boom that will benefit not only Exxon and Guyana but neighboring Suriname. During December 2020, Exxon announced that along with partner Malaya’s national oil company Petronas, that hydrocarbons had been discovered in Block 52 offshore Suriname. Petronas stated: “The Sloanea-1 exploration well encountered several hydrocarbon-bearing sandstone packages with good reservoir qualities in the Campanian section. The well data proves excellent calibration of the hydrocarbon potential of the block.” This indicates the discovery holds considerable potential, especially when it is considered that Block 52 borders Block 58 where Apache and Total made three significant oil discoveries during 2020.

The Guyana-Suriname Basin was determined by the U.S. Geological Survey in 2000 to have mean undiscovered resources of over 15 billion barrels of crude oil and 42 trillion cubic feet of natural gas. In 2019, the USGS stated it was looking to resurvey the Guyana-Suriname Basin with a view to the geological formation holding greater quantities of hydrocarbons than initially estimated. That bodes well for Exxon and its partners to make more discoveries and continue growing low-cost oil production in the basin. As those oil discoveries are made and production grows, it will substantially boost economic growth in the impoverished former colonies of Guyana and Suriname as well as urgently needed government revenues.

By Matthew Smith for Oilprice.com