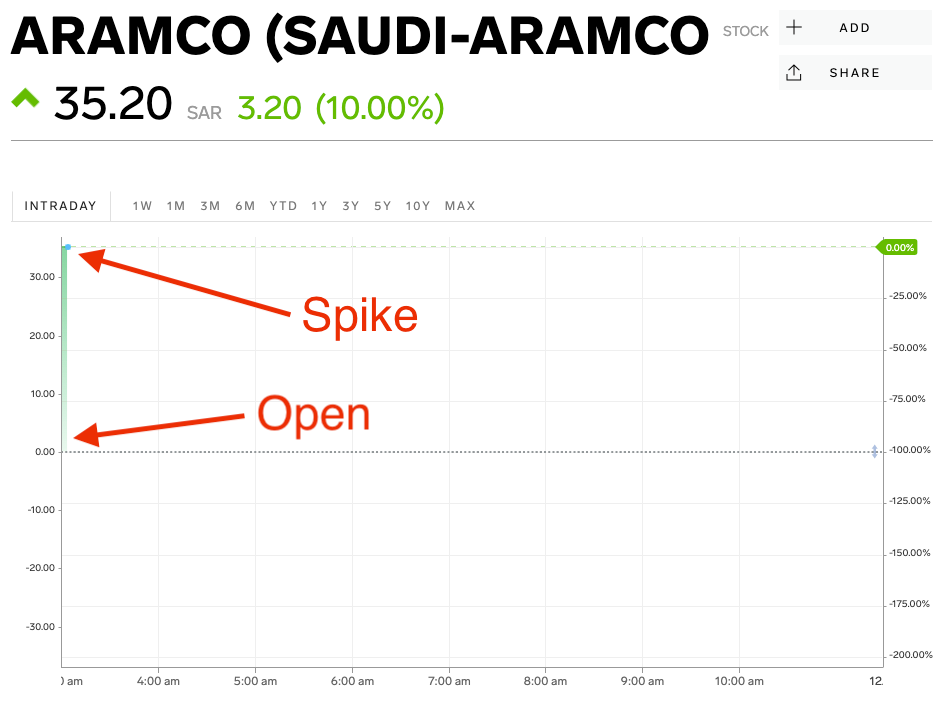 Saudi Aramco shares spiked 10% on Wednesday on their first day of trading publicly on the Tadawul exchange.

The surge hit the exchange's daily limit and means the company, which earlier this week was valued at $1.7 trillion after raising $25.6 billion in its initial public offering, is now worth a whopping $1.9 trillion. That dwarfs the market capitalizations of the biggest US giants, including Microsoft, Apple, and Google's parent, Alphabet.

Crown Prince Mohammad bin Salman had been seeking a valuation of $2 trillion for the state-owned oil giant, whose public offering was meant to help finance his Vision 2030 plan of diversifying the Saudi economy away from oil.

According to The Wall Street Journal, Saudi officials had been pushing for the country's wealthy to buy shares in the company when it went public, and according to the Financial Times, that was happening until Tuesday evening.

The stake in Aramco that was actually offered in the IPO, however, was tiny compared with listings from other companies. Apple, Amazon, and Alphabet have over 84% of their shares held by public investors, according to Bloomberg data. For Facebook, public holders own about 98.8% of its shares. That compares with just 1.5% for Aramco.
Posted by Crude Oil Daily at 11:46 AM