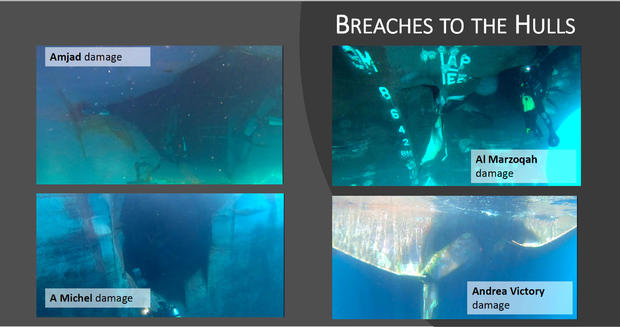 The first photos of damage to the hulls of four oil tankers that were hit in an alleged sabotage attack on May 12, 2019, near the port of Fujairah in the United Arab Emirates (UAE), taken by UAE divers and shown to United Nations Security Council delegations on June 6, 2019 in New York. HANDOUT

Pamela Falk is CBS News Foreign Affairs Analyst and an international lawyer, based at the United Nations.


United Nations -- Three nations that own the oil tankers damaged last month in an alleged sabotage attack, which the U.S. has blamed on Iran, have told the United Nations that their joint investigation strongly suggests a "state actor" was behind the explosions, but the probe stops short of pointing a finger at Tehran.

The investigating nations also revealed the first photos of the damage to the tankers' hulls taken by divers, showing large holes caused by what U.S. officials have described to CBS News as limpet bombs, believed to have been stuck onto the ships by attacking divers for the May 12 attack.

"While investigations are still ongoing, these facts are strong indications that the four attacks were part of a sophisticated and coordinated operation carried out by an actor with significant operational capacity, most likely a state actor," the U.N. was told on Thursday.
The photos of the tankers from Norway, the United Arab Emirates, and Saudi Arabia were taken by underwater divers of the Emirates, which led the investigation with support from U.S. military experts. The photos were shown during an informal briefing on Thursday to nations of the U.N. Security Council and to a small group of reporters, including CBS News.


The briefing on the investigation was given by Emirates Ambassador Lana Nusseibeh, Saudi Arabia's UN Ambassador Abdallah al-Mouallimi, and Norway's Deputy Ambassador Mari Skåre, to members of the Security Council, including U.S. acting Ambassador Jonathan Cohen.

U.S. military officials and the White House have definitively laid blame for the attack on Iran, as has close U.S. ally and Iranian arch-rival Saudi Arabia.
Russia's Deputy Ambassador Vladimir Safronkov was at the briefing on Thursday, which took place at the Mission of the United Arab Emirates, and said diplomats should not "jump to conclusions," echoing previous Russian officials, urging a de-escalation of tensions in the region.

Norway, the Emirates and Saudi Arabia warned world powers said at the briefing that they wished to stress "that the attacks endangered international commercial navigation and the security of global energy supplies, and threatened international peace and security."

The attacks took place in the Gulf of Oman, "within UAE territorial waters less than 12 nautical miles from the UAE coastline," the investigation states. Its primary conclusions will be shared with the International Maritime Organization (IMO) and other intelligence agencies.

Explaining its conclusion that a nation was likely behind the attack, rather than a criminal or terrorist group, for instance, the investigation found:


"The attacks required the expert navigation of fast boats," the investigation states, "with understanding of the geographic area, that were able to intrude into UAE territorial waters and to exfiltrate the operatives after delivering the explosive charges."


Tension in the Gulf

The attacks on the oil tankers came amid a sharp escalation of tension between the U.S. and Iran.

American officials told CBS News senior national security correspondent David Martin last month that the initial assessment of a U.S. team sent to investigate the incidents was that Iran or Iranian-backed proxies had used explosives to blow holes in the four ships.
Meanwhile, citing intelligence suggesting a heightened threat to U.S. personnel and interests in Syria and Iraq from Iran or the groups it backs in the region, the White House ordered a U.S. aircraft carrier strike group and four B-52 bombers to the region.

On Thursday, the Associated Press quoted Marine Gen. Frank McKenzie, commander of U.S. forces in the Middle East, as saying Iran appeared to have taken a "step back and recalculate" in response to the U.S. military buildup in the Persian Gulf region, but he also cautioned there was no conclusion that Iran had abandoned the alleged plans for potential attacks against American interests.
Posted by Crude Oil Daily at 12:30 PM