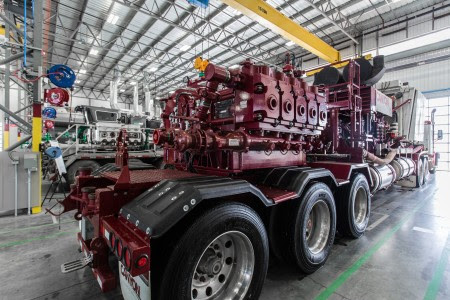 Weir Oil & Gas has reached more than 1,000 hours of pumping time in harsh conditions with is SPM QEM 3000 frac pump.

Subsequently, the Fort Worth, Texas-based company reports it has agreed on a sale of a fleet of the pumps to Canyon Services Group, based in Calgary, Canada.

The two companies intend to deploy the SPM QEM 3000 frac pump to production sites in the Duvernay and Montney formations in the Western Canada Sedimentary Basin.

As outlined in the field test agreement, an inspection was performed at approximately 1,000 hours of operation, which showed minimal signs of the typical wear seen in previous generation pumps.

Due to this durability, Weir’s pump is projected to meet 6,000 hours before major overhauls, leading to the estimated 17% reduction in total cost of ownership.

The pump will return to the field for a minimum of 5,000 hours of additional testing.

James Rukin, divisional manager for pumping services at Canyon, says the company ran the Weir pump “harder than any other” in its fleet.

“Since putting the unit in service, we’ve experienced first-hand the reliability, ruggedness, and efficiency we were promised by Weir. The SPM QEM 3000 delivers on value, and we have made the strategic decision to add 11 units to our fleet.”

“It’s gratifying to see the hard work of our design and engineering teams come to fruition, but even more rewarding to have an industry leader such as Canyon put their trust in us,” said David Paradis, president of pressure pumping at Weir Oil & Gas.

“Adding our SPM QEM 3000 Frac Pump to their fleet demonstrates the value in delivering efficient, continuous-duty equipment with a lower cost of ownership,” he added.

Before sending the Canyon unit to the field, a SPM QEM 3000 pump completed a 13 million cycle endurance test in Weir’s Research & Development Center located in Fort Worth.

As a traditional frac pump development process typically tests up to 1 million cycles, the extended test proves that the pump is unrivalled in terms of durability, cost-efficiency, long-term performance, and life span, Weir states.

The SPM QEM 3000 was situated behind a typical 2500HP drive train and the pump was able to utilise 100% of the available power and torque output.
Posted by Crude Oil Daily at 1:15 PM