http://www.hellenicshippingnews.com/vlcc-jackpot-the-best-slot-machine-in-town/
We may be in a recession, but some segments of the shipping market are doing better than others. In the last few months the dry bulk market has been plumbing the depths of despair, whilst large tanker owners appear to have hit the jackpot, with rates surging to over $60,000/day. Why is it that tankers are doing so well this year?
It’s All About Dynamics
Back in September VLCC tankers were earning less than $15,000/day, but over the winter the tanker market “slot machine” lined itself up with the four 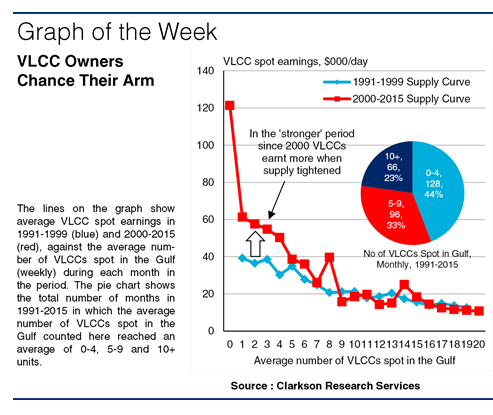 cherries needed to hit the jackpot. The first cherry was the seasonal cycle. Oil demand is generally higher in the final quarter of the year and in 2014 major importer demand was 2.2m bpd higher in Q4 than in Q2. The second cherry was the oil price, which collapsed just as the seasonal cycle got started. By the year end Brent at $50/bbl encouraged traders punting on physical oil, and where better place to put it than in a tanker? Cherry number three was slow steaming which meant that ships were at sea, not hanging around the loading zone. In December 2014 there was only one VLCC sitting spot in the Gulf on average, down from 12 in September 2014.
Fruity Number Four?
The fourth cherry was more subtle, but equally important; tanker owners seem to be better at “finding the floor” when the market tightens. In weaker periods, the theory runs, tanker owners are less likely to counter strongly in a tight market, for fear that charterers would turn the tables when the market slackens. When the supply-demand balance is more robust, as it appears to be today, they manage things more confidently. This sounds plausible, but is it true? To check, we analysed VLCC spot earnings since 1991, using the monthly average of VLCCs spot in the Gulf to indicate available supply. Splitting the data at 2000, we calculated the average earnings for each number of VLCCs sitting spot in the Gulf.
From A Position Of Strength
The results are shown in the graph. The blue line shows the spot/earnings relationship 1991-99 and the red line shows the same 2000-15. The lines suggest that with 7-20 VLCCs sitting spot in the Gulf, earnings were much the same in both the ‘weaker’ period (average earnings of $26,000/day 1991-99) and the ‘stronger’ period (average earnings post-2000 of $46,000/day). But with 6 or fewer spot ships, the earnings since 2000 have been 68% higher, suggesting that owners can take greater advantage of a tight supply situation when the overall supply-demand balance is more positive.
How To Win The Jackpot
So there you have it – two conclusions. Firstly the number of ships in the loading zone is what matters, not any “theoretical surplus”. If ships are slow steaming, such a surplus only matters if they speed up. Secondly the analysis suggests that when the supply of spot ships is tight, the wider ‘strength’ of the market impacts how owners negotiate matters a great deal. Relative to spot supply, VLCC earnings in the stronger post-2000 period increased significantly compared with the weaker 1990s. As a result, the conclusion for owners could be “stay slow and be brave”. Have a nice day.
Source: Clarksons
Posted by Crude Oil Daily at 10:15 AM