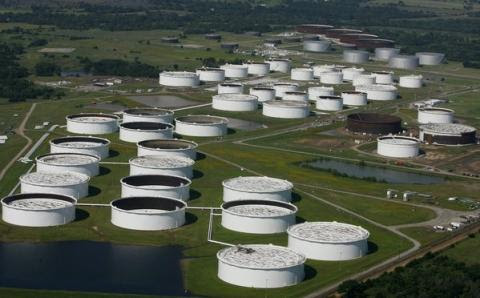 Crude oil storage at Cushing reached 54.4 million barrels on March 13 – the highest volume on record according to the Energy Information Administration (EIA).

While this has broken records for the highest volume of crude oil stored at America’s largest oil storage facility in Oklahoma – it is not the highest percent of storage utilization as working storage capacity at the Cushing has also increased over time.

Crude oil storage has been increasing for 15 consecutive weeks, according to the EIA.

Although inventory levels are at a record high, storage utilisation – inventories as a percentage of working storage capacity – are not at record levels. The amount of capacity being utilised at Cushing is at 77% - a 10% increase from previous reports of capacity filled in February and a significant surge from 27% in October 2014.

The ability to ship crude oil in pipelines both to and from Cushing has increased recently and as a result inventory levels have changed more rapidly than in previous years. Inventory levels at Cushing in the previous two months have changed by around 2.2 million barrels. In previous years, the net weekly changes were in the range of 500,000 to one million barrels either in or out of Cushing.
Posted by Crude Oil Daily at 9:08 AM