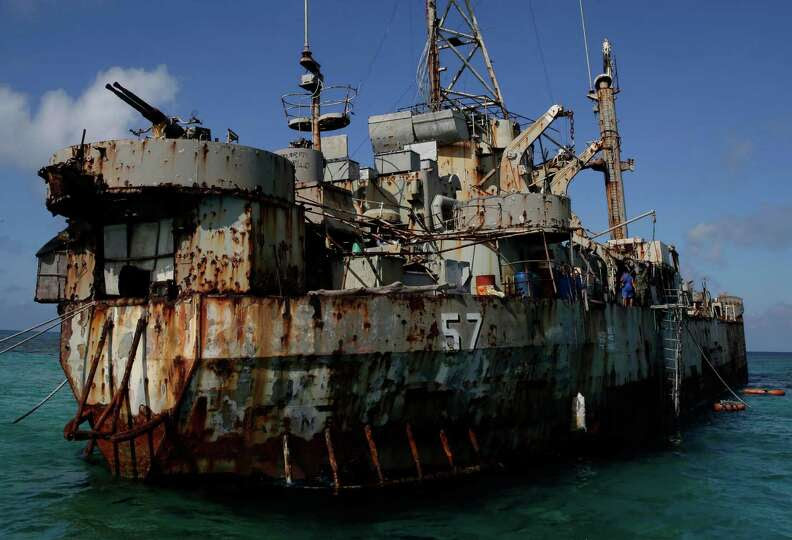 SPRATLY ISLANDS, PHILIPPINES - AUGUST 06: (CHINA OUT, SOUTH KOREA OUT) The dilapidated Sierra Madre, a former U.S. tank landing ship, in Ayungin Shoal, as the Philippines' outpost against China in Spratly Islands on August 6, 2014 in Spratly Islands, Philippines. China, which has been flexing its military muscle in recent years to expand its maritime presence, is ratcheting up pressure at this particular site. The Philippines occupies nine islets and reefs in the Spratlys. But Ayungin Shoal is the only spot that is constantly exposed to the surveillance activities of Chinese patrol vessels. In 1995, Beijing upped the ante by erecting a structure in Mischief Reef, which is located in the Philippines' exclusive economic zone, calling it a 'shelter for fishing boats.' The Philippine military countered the move by deliberately running the Sierra Madre aground in Ayungin Shoal four years later as an outpost to keep the islands under its control. In South China Sea, Spratly Islands are disputed area, where China, Vietnam, the Philippines and Malaysia have claimed sovereignty. (Photo by The Asahi Shimbun via Getty Images)

BEIJING (AP) - The Chinese exploration rig at the center of a tense maritime standoff with Vietnam earlier this year has made its first deep sea gas discovery in the politically volatile South China Sea, state media announced Tuesday.

The discovery by China National Offshore Oil Corp. was made about a month after its rig withdrew in July from Vietnam's exclusive economic zone to far less-contested waters closer to China.

The find by CNOOC's two-year-old, $1 billion deep sea rig is about 150 kilometers south of China's southernmost island of Hainan. It's unclear whether the discovery will become commercially viable, but the announcement represents a significant step in China's ability to seek resources beneath the South China Sea.

Petroleum reserves and fisheries are among the resources at stake in disputes over the sea, which is one of the world's busiest shipping routes and a patchwork of overlapping claims by governments including China, the Philippines, Malaysia, Vietnam and Taiwan. China claims virtually all of the South China Sea.

The find was China's first without the participation of foreign partners that in the past have included companies such as Chevron and BP, said Felix Tan, a Beijing-based analyst for energy and resources consultant Wood MacKenzie.

"This is the first discovery they've done all by themselves," Tan said in an interview. CNOOC has rapidly developed a deep-water exploration capability, he said.

"It's a bit premature to talk about the viability" of the field, however, Tan said. "There are a lot of tests to be done."

The gas field was discovered Aug. 18 at a depth of about 1,500 meters, CNOOC said on its website.
The depth is at the extreme cusp of what the industry considers a deep-water field, or those from 400 to 1,500 meters. Below 1,500 meters would be ultra-deep, where extraordinary pressures make the building of facilities extremely difficult.

Xinhua said the field's viability is still to be proven, but quoted a CNOOC manager, Xie Yuhong, as saying the well could be capable of producing up to 56.5 million cubic feet of gas per day, or about 9,400 barrels.
Posted by Crude Oil Daily at 9:29 AM