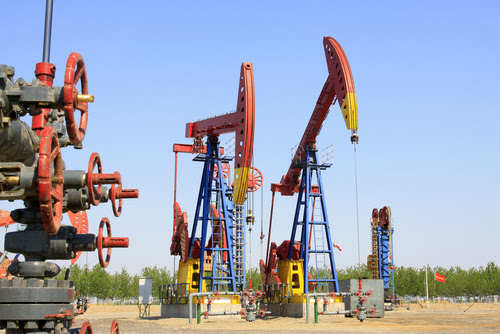 According to Reuters, the world's largest super-tanker has been booked by a Chinese trading firm in order to store crude oil at sea, increasing the number of vessels used for floating storage. Benchmark oil prices were down to below $100 a barrel.

Industry sources said that the ship the Chinese firm Unipec, the marketing arm of Beijing-backed oil giant Sinopec, has booked is the 3.2-million-barrel TI Europe. This is only one of several Ultra Large Crude Carriers that are still in operation. The TI Europe is currently the world's largest ocean-going vessel based off of tonnage, and is extremely long, measuring 380 meters.

Last week, oil and gas stocks saw losses as global crude oil prices were down following a cease fire agreement between the Ukraine and pro-Russia rebels, which was seen as an important first step toward a resolution to the five-month conflict in eastern Ukraine, reports Forbes.

Traders across the global market were forced to rely on one of the oldest strategies after they were faced with these enormous amounts of crude oil, which includes putting oil into storage rather than selling it. Expert traders now have an avenue for making money despite the fact that relatively cheap front-month prices are bad news for oil bulls, for they can take advantage of current low prices and store barrels. Meanwhile, selling futures contracts can lock in the higher prices for crude to be delivered in several months. Traders will make money if the price difference is higher than the costs of storage and capital, reports The Wall Street Journal.

Therefore, the traders that will make money are those who already have access to a large amount of physical oil, such as pipeline companies, oil producers and trading houses.

The recent move to book the vessel is a sure sign that an oversupply of oil and falling prices have caused traders to store crude in the highest volumes since over five years ago during the financial crisis. Analysts expect there are over 50 million barrels of oil already in storage.The move also shows the expanding clout of state-backed Chinese firms in global oil trading, with Unipec and PetroChina creating sophisticated dealing desks in primary locations over recent years, such as London and Singapore. Trading sources have reported that Unipec will eventually ship cheap oil from Europe and store it near Singapore on the ULCC.

"It doesn't surprise me. They have been buying everything in northwest Europe," one oil trader told Reuters on Monday, referring to the large number of cargoes Unipec has purchased of Russia's main crude export since the beginning of this month.

The oversupply of global oil has played a major role in pushing the price of Brent crude under $100 a barrel. The Brent crude October contract for the global benchmark has fallen just under $100 a barrel for the first time in 15 months, at $99.95. This is approximately $3 under the peak of future prices next April.

The amount of crude tankers used for storage has sharply increased after years in the doldrums. The balance is between Asia and South Africa's Saldhana Bay harbor, a possible cause for a boost in tanker rates. Rates have been lagging near a third of the level hit during the previous oversupply.
Posted by Crude Oil Daily at 10:09 AM