Illinois deal on fracking could be national model. Oil industry, environmental groups team up to draft regulations for fracking in Illinois. 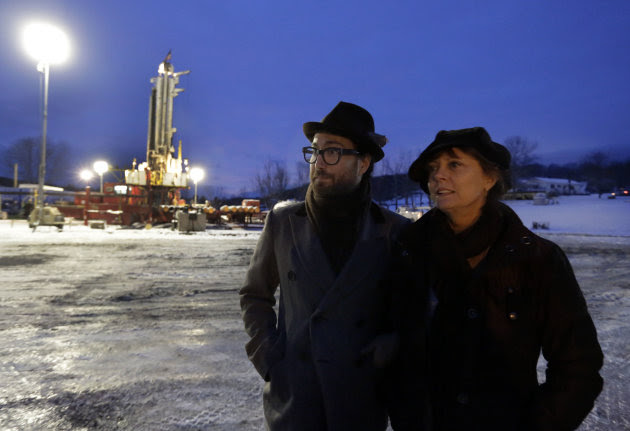 FILE - In this Jan. 17, 2013 file photo, Sean Lennon and actress Susan Sarandon visit a fracking site in New Milford, Pa. As thousands around the country …more mobilize for and against hydraulic fracturing, industry and some environmental groups in Illinois have come together to draft regulations both sides could live with. Some hope that cooperative approach could be a model for other states. (AP Photo/Richard Drew, File) less

CHICAGO (AP) -- After years of clashing over the drilling method known as hydraulic fracturing, or "fracking," the oil industry and environmentalists have achieved something extraordinary in Illinois: They sat down together to draft regulations both sides could live with.


If approved by lawmakers, participants say, the rules would be the nation's strictest. The Illinois model might also offer a template to other states seeking to carve out a middle ground between energy companies that would like free rein and environmental groups that want to ban the practice entirely.

"The fact that Illinois got there," was significant, said Brian Petty, executive vice president of governmental and regulatory affairs at the International Association of Drilling Contractors. "Anytime you can bring the lion and lamb to the table, it's a good thing. But it's so highly politicized in lot of places" that compromise could be difficult.

The industry insists the method is safe and would create thousands of jobs — possibly 40,000 in the poorest area of Illinois, according to one study. Opponents say it causes water and air pollution and permanently depletes freshwater resources.

In New York, where a fracking moratorium is in effect until a health study is completed, one activist said Illinois environmentalists caved in when they should have pushed harder to block fracking.
"I was just appalled at this collaboration ... to create these regulations based on the false premise that fracking is inevitable," said Sandra Steingraber, an Illinois native and founder of New Yorkers Against Fracking, a group whose champions include actor Mark Ruffalo and singer Natalie

Merchant. "It was not their job to help pave the way for fracking to move into Illinois. It was to protect the environment."


But Michigan's largest environmental coalition might be willing to take a cue from Illinois if lawmakers decide that fracking should be part of Michigan's energy mix.

"We would love to see that kind of bipartisan cooperation," said Hugh McDiarmid, spokesman for the Michigan Environmental Council. The Illinois bill "has a lot of good ideas and a lot of things ... that mirror what we're trying to achieve in Michigan" because stopping or banning fracking would be unrealistic.

That's exactly what motivated some Illinois environmental groups to sit down with industry, lawmakers, regulators and the attorney general's office.

In Illinois, it came down to "do we accept the invitation to go to the table or walk away and allow industry to write the rules?" said Allen Grosboll, co-legislative director at the Chicago-based Environmental Law and Policy Center. "For us to say we were not going to participate and drive the hardest deal we could to protect environment would have been totally irresponsible."


The Natural Resources Defense Council supported a failed attempt at a fracking moratorium last year. So with lawmakers clearly ready to allow fracking in southern Illinois, the NRDC wanted to ensure there were significant safeguards, including making drillers liable for water pollution, requiring them to disclose the chemicals used and enabling residents to sue for damages.

"One of the positive things here has been the table to which a wide range of interests have come ... to address the risks in an adult way," said Henry Henderson, director of the NRDC's Midwest office. "We have gotten over the frustrating chasm of 'Are you for the environment or for the economy?' That is an empty staring contest."


Negotiations took place over four or five months, primarily at the Statehouse in meetings led by state Rep. John Bradley, a Democrat who lives in the area where fracking would occur, participants said.
Bradley whittled negotiators down to a core group — four from industry, four from environmental groups, plus representatives from the attorney general's and governor's offices, regulatory agencies and lawmakers, said Mark Denzler, vice president of the Illinois Manufacturers' Association.

That group was pared even further for the toughest negotiations, which included discussions with outside technical experts on complicated issues, said Ann Alexander, an NRDC senior attorney.
"I won't say there weren't times that voices got raised a little bit, but ... it's a very good model of cooperation," Alexander said. "It beats the (typical) model of having drafts furtively circulating ... or emerging at the last minute when nobody has had a chance to read them."

The deal was done by late February. It has yet to be considered by a legislative committee, which would have to endorse the proposal before sending it to the full House.

With oil companies leasing millions of acres around the country in a rush to extract oil and gas reserves, more states will face similar challenges.


Although Illinois' proposed regulations might not work for every state, the unusual model of cooperation might, depending on the relationship between industry and environmentalists, Denzler said. Even now, though, Illinois' agreement is "very precarious," and his group has warned that any attempts to change it before it comes for a vote "could tip it one way or another."

More than 170 bills were introduced in 29 states last year to regulate oil and gas drilling, according to the National Conference of State Legislatures. Only 14 became law. Many were simply to define whether local, state or federal government could regulate fracking. The bills don't include regulations drafted by state regulatory agencies, rather than lawmakers.

California state Sen. Hannah-Beth Jackson said Illinois was able to negotiate many of the same protections she wants in her state, where energy companies are eying a shale formation near Santa Barbara that may have four times more oil than North Dakota. She said regulations proposed by the governor's office were inadequate.

"It would be wonderful, frankly, if we could get everybody to sit down," said Jackson, who introduced a bill to regulate fracking wastewater. "In California, there is the perception the companies are stonewalling and do not want to be subject to any oversight. I think if they are willing to sit down and talk, that would certainly be best way to do it."

Environmentalists and industry have worked together to control pollution in the past, including on individual fracking issues in some states, though none was as comprehensive as the Illinois bill. But many environmental groups would rather forbid fracking completely.

"You can't regulate fracking to be cleaner," said Dan Jacobson, legislative director of Environment California. "We're at such a tipping point with climate now."

Even in Illinois, some environmental groups don't support the bill and are mobilizing to seek an outright ban. On Saturday, fracking opponents interrupted Bradley while he spoke at a conference in southern Illinois. They plan another protest Monday, at a conference of county officials.

Bringing both sides together "is something that should absolutely happen," said Steve Everly, spokesman for Energy in Depth, the educational arm of the Independent Petroleum Association of America. But he said environmental groups that participate "have to continue to support" the regulations afterward.

"If you put together the right formula, you can move forward," he said.

It is possible that there will be more collaboration to establish better safeguards for air, water and climate, said Mike Brune, executive director of the Sierra Club. "But as we learn more about the true impacts of gas, and more and more communities are questioning whether we need it at all ... we'll definitely see more conflicts."
___
Follow Tammy Webber at: www.twitter.com/twebber02