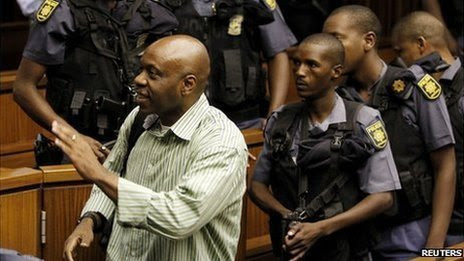 He was found guilty of 13 terrorism-related charges over twin car bombings during Nigeria's independence day celebrations in 2010.

At least 12 people were killed and 36 others injured.

Okah led a group which said it was fighting to help Niger Delta residents gain a greater share of the oil wealth from their part of southern Nigeria.
'Good cause'
The court established that Okah was the former leader of the Movement for the Emancipation of the Niger Delta, Mend.

He also received a 13-year jail term for threats made to the South African government after his arrest in October 2010 but this runs concurrently with his 24-year sentence.

He had repeatedly denied any involvement in the bombings.

Judge Neels Claassen found that the state had proven Okah's guilt beyond a reasonable doubt because he didn't testify in his own defence during the trial.

It would be wrong for the court to turn a blind eye to the fact that the "struggle in Nigeria was for a good cause" and said it was important to "balance Okah's political intentions with the violent nature of his crimes".

South Africa's National Prosecuting Authority says it may appeal against the sentence - it had wanted life in jail.

Prosecutors have argued that although Okah is not a South Africa citizen, the country had the jurisdiction to try him under the International Co-operation in Criminal Matters Act.

Analysts believe it would have been too dangerous for him to be tried in Nigeria because of the presence of his militant supporters.

The BBC's Will Ross in Lagos says Okah may no longer be a headache for the Nigerian authorities but the threat of instability in the Niger Delta remains strong, despite a fall in the levels of violence since a 2009 amnesty.

Okah was arrested on gun-running charges in Angola in 2007 and then transferred to Nigeria but never convicted.

He was released after two years under an amnesty for oil militants and he returned to South Africa, where he had lived since 2003.

While Mend and other militant groups say they were fighting for a political cause, criminal gangs have taken advantage of the region's instability to make money from ransoms paid by oil companies, and by stealing oil.

At its peak, the instability in the Niger Delta cost Nigeria about $1bn (£630m) in lost revenue, Reuters news agency quotes the central bank as saying.

Nigeria is Africa's biggest oil producer, but most of its people live in poverty.
Posted by Crude Oil Daily at 5:27 PM