A day after another Iranian tanker arrives in Venezuela, the US sends another warship to sail along its coast 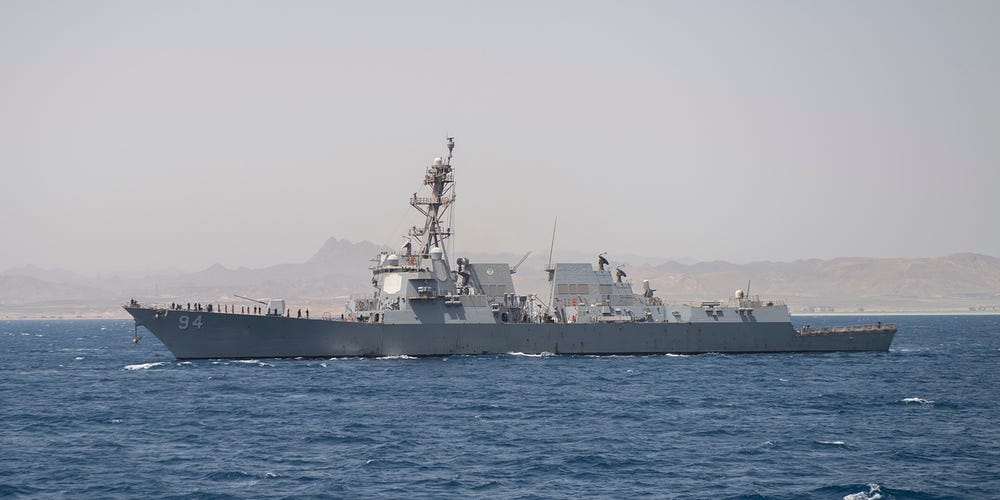 The US military said Tuesday that a Navy guided-missile destroyer sailed along the coast of Venezuela in what the command responsible for the region called a "freedom of navigation operation."

US Southern Command said in a release that the USS Nitze sailed in international waters outside 12-nautical-mile limit on territorial waters and "lawfully navigated an area the illegitimate Maduro regime falsely claims to have control over, a claim that is inconsistent with international law."

Asked about the operation, a spokesman for the command said it was done "to challenge Venezuela's excessive maritime claim of security jurisdiction from 12 to 15 nautical miles along its coastline and prior permission requirement for military operations within the Exclusive Economic Zone, which are contrary to international law."

Exclusive economic zones extend 200 nautical miles from a country's coast, and while that country has rights to economic activities within that zone, ships from other countries can sail through it.

The operation, the second of its kind this year, comes amid heightened tensions between the US and Venezuela.

The Trump administration has applied increasing pressure to the government of President Nicolás Maduro, who the US and dozens of other countries regard as illegitimate. The US has indicted Maduro and members of his inner circle on drug-trafficking charges and sanctioned many in the government, the military, and government assets.

US efforts to isolate Venezuela's oil industry, on which the country is reliant for income but has been undercut by mismanagement, have led Maduro's government to turn to Iran, which has delivered refinery materials as well as gasoline to ease supply shortages in Venezuela.

Several Iranian tankers have already traveled to Venezuela. On Monday, the Iranian-flagged cargo ship Golsan arrived at the port of La Guaira in Venezuela with what Iran's Embassy in Caracas said was food for the country's first Iranian supermarket, according to Reuters.

There was no indication that the Golsan and Nitze encountered each other, but Washington and Tehran have traded threats over the shipments. The US has said it is considering a response to the tankers but has taken no military action, while Iranian officials have said repeatedly they're ready to retaliate if the US acts against tankers heading to Venezuela.

The aid Iran has offered Venezuela, as well as ongoing support from Russia and China, has led to a growing view of Venezuela as a venue for great-power rivalry.

The latest Iranian shipment also comes amid an ongoing US counter-drug operation in the Caribbean and Eastern Pacific Ocean, which began in April and has seen a number of US naval and air assets deployed to the region; US Army advisers have also deployed to neighboring Colombia.

The US Air Force said on Friday that it would temporarily deploy four aircraft — two surveillance aircraft and two aerial refueling tankers — and 200 airmen to Curaçao to fly missions in support of those counter-drug efforts.

The US government and the other mainly Western countries that no longer recognize Maduro have instead recognized Juan Guaidó, an opposition leader and head of Venezuela's national assembly, as interim president.

But Guaidó has struggled to unite the opposition and to counter Maduro. In an interview on Sunday, Trump appeared to wavier in his support for Guaidó and suggested he was open to meeting Maduro. Hours later, Trump walked that back, saying he "would only meet with Maduro to discuss one thing: a peaceful exit from power!"
Posted by Crude Oil Daily at 3:05 PM