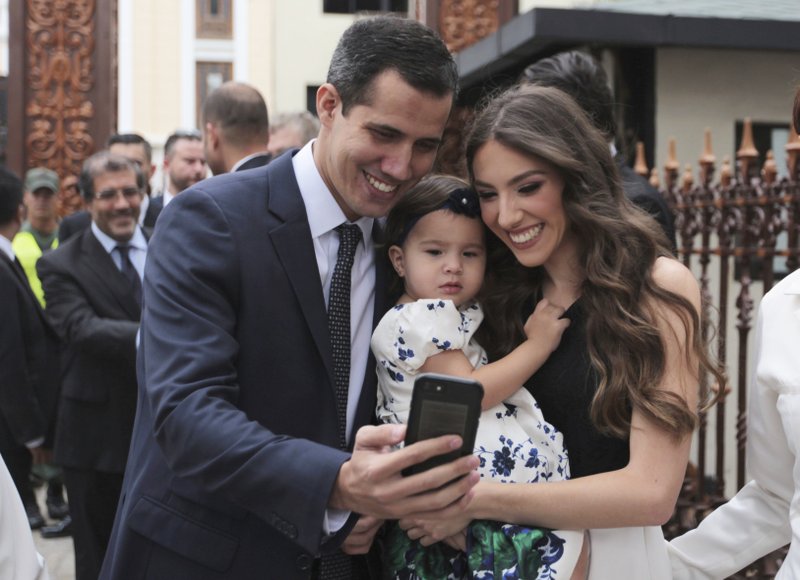 FILE - In this Jan. 5, 2019 file photo, incoming congressional president Juan Guaido, left, takes a selfie photo with his wife Fabiana Rosales and his daughter Miranda Guaido upon arrival to swear in the new board of the National Assembly in Caracas, Venezuela. Guaido stunned Venezuelans on Wednesday, Jan. 23, 2019 by declaring himself interim president before cheering supporters in Venezuela’s capital, buoyed by massive anti-government protests. (AP Photo/Fernando Llano, File)

CARACAS, Venezuela (AP) — The rise of Juan Guaido from back-bench obscurity to the U.S-backed, self-declared interim president of Venezuela in just three weeks has been meteoric - and by his own recognition risky.

Few Venezuelans had even heard of the fresh-faced, 35-year-old lawmaker when he was plucked from anonymity and named as president of the opposition-controlled National Assembly in early January. The move set up a high-stakes standoff with President Nicolas Maduro, who is increasingly seen as a dictator both at home and abroad.

Instead of backing down, Guaido stunned Venezuelans on Wednesday by declaring himself interim president before cheering supporters in Venezuela’s capital, buoyed by massive anti-government protests. And support from President Donald Trump, Canada and numerous Latin American countries, along with the Organization of American States, immediately rolled in.

But even as he was symbolically sworn in, he foretold of dangers, telling supporters: “We know that this will have consequences.” Moments later he slipped away to an unknown location amid speculation he would soon be arrested.

Last week, Venezuela’s feared SEBIN intelligence police pulled Guaido from his vehicle as he headed to a town hall meeting and briefly detained him. And the rival constitutional assembly controlled by Maduro’s allies threatened Guaido and others with an investigation for treason.
Key to Guaido’s rise to prominence has been timing - and behind-the-scenes backing. 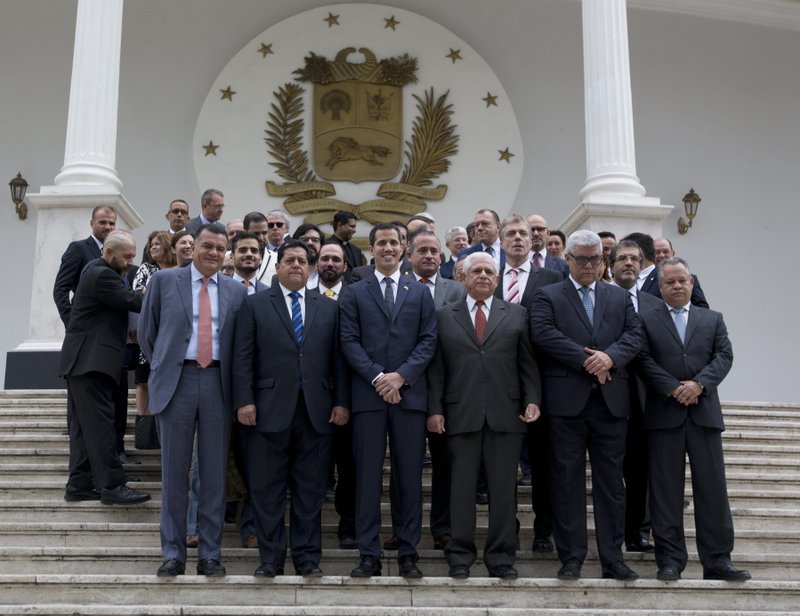 In this Jan. 5, 2019 file photo, incoming congressional President Juan Guaido, front center, poses for a photo with his colleagues prior a special session of the National Assembly in Caracas, Venezuela.
As Venezuela’s economic crisis deepens, with masses fleeing the country to escape runaway inflation on pace to surpass 23 million percent, many are desperate for a new leader to rescue the once-wealthy oil nation. Into that void stepped Guaido.

An industrial engineer who cut his political teeth in a student protest movement a decade ago, he was elected to the National Assembly in 2015, and in its first session this year was named its leader.

At the time, Maduro made light of his newcomer status, feigning confusion over whether his name was “Guaido” or “Guaire,” a notoriously polluted river that runs through Caracas.

But following Wednesday’s presidential self-declaration, and a U.S. led chorus of Western hemisphere nations backing his challenge, Maduro responded with fury, swiftly cutting off diplomatic relations with the United States and giving American diplomats 72 hours to leave the country.

The architect of Guaido’s meteoric rise is Leopoldo Lopez, Venezuela’s most popular opposition leader, who is muzzled under house arrest and considered by government opponents to be a political prisoner.

At a time when many had written off the National Assembly, which was stripped of its last bit of power after the government set up the rival constitutional assembly in 2017, Lopez maneuvered behind the scenes for his Popular Will party to assume the presidency of the gutted legislature.

He then tapped Guaido, serving his first full term as a lawmaker, who rose to the helm of their party in Venezuela after eight more senior politicians sitting on Popular Will’s national board were exiled since 2014. 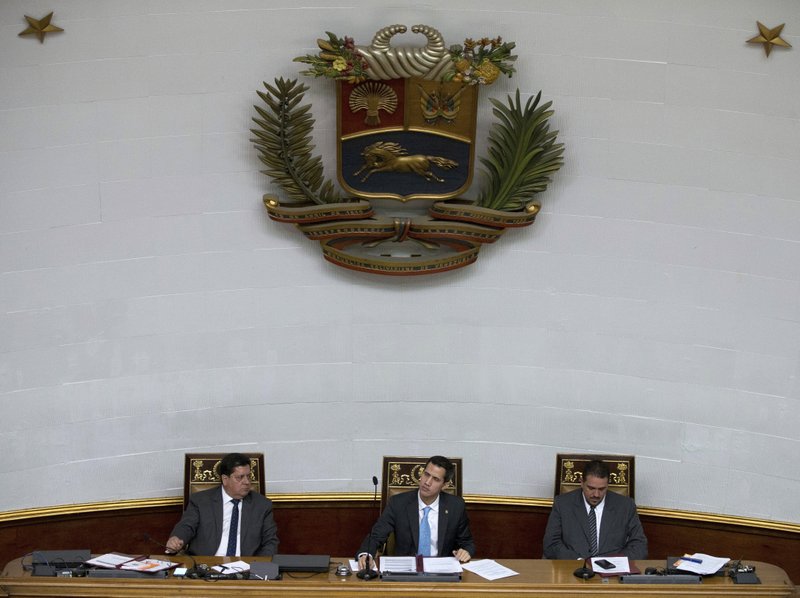 In this Jan. 15, 2019 file photo, leaders of the opposition-controlled National Assembly, President Juan Guaido, center, First Vice President Edgar Zambrano, left, and second Vice President Stalin Gonzalez hold a session with lawmakers at the National Assembly to debate actions against Venezuelan President Nicolas Maduro, in Caracas, Venezuela.
Guaido has been a loyal acolyte of Lopez for years, standing beside him at a 2014 news conference when the activist announced a strategy of anti-Maduro unrest. What was called “The Exit” bitterly divided the opposition because it came less than a year into Maduro’s presidency, when support for his rule was still strong.

The two talk a half dozen times each day, and not a single speech or move isn’t coordinated with Lopez first, said one ally, who spoke on the condition of anonymity because they were not authorized to discuss the internal proceedings.

Luis Vicente Leon, head of the Caracas-based polling firm Datanalisis, said that Guaido was so unknown that he hadn’t even measured Guaido’s approval ratings, like he does numerous other politicians. But he plans to start doing so this week.

Critics say Guaido lacks a political vision, pointing to his rambling debut speech as the legislature’s president, which was full of rhetorical barbs aimed at the “usurper” Maduro but short on specifics on how to get out of the malaise.

Still, others see his youth and relative inexperience as breathing life into the beaten-down opposition, making Maduro’s frequent diatribes that it is dominated by elitist relics from Venezuela’s pre-revolutionary past harder to stick. 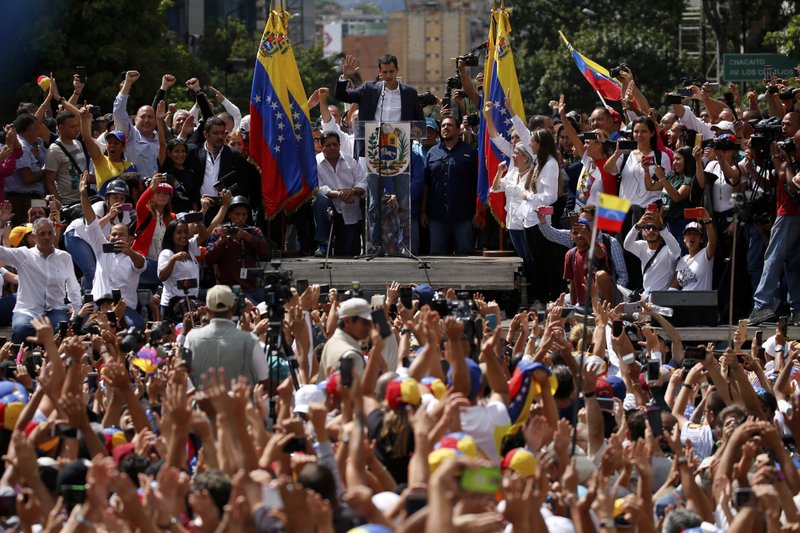 Juan Guaido, head of the opposition-run congress, looks down and holds up his hand during his symbolic swearing-in as interim president of Venezuela on a stage during a rally demanding President Nicolas Maduro's resignation in Caracas, Venezuela, Wednesday, Jan. 23, 2019. Guaido declared himself interim president. (AP Photo/Fernando Llano)
Guaido told The Associated Press in a recent interview he doesn’t fear running into the same fate as his political allies. He pointed to scars on his neck caused by rubber bullets fired during 2017 street demonstrations against Maduro.

“I still have projectiles lodged here,” he said.

Guaido has endured hardships for much of his life. At age 15, shortly after Maduro’s mentor, the late Hugo Chavez, assumed the presidency and ushered in a socialist overhaul, Guaido and his family survived a torrential mudslide that killed thousands and left many more homeless in the port city of La Guaira, a short distance from Caracas and home to the capital’s airport.

“We are survivors,” he said. “If they take Juan Guaido prisoner, someone else will emerge, because our generation won’t give up.”

Like Lopez, the wiry Guaido prides himself an athlete and is a devotee of his hometown’s Sharks — a perennial loser in the Venezuelan baseball league. He and his wife, a fellow activist, have a daughter named for Francisco de Miranda, a precursor to Venezuelan independence hero Simon Bolivar.

While in congress, Guaido earned a reputation as a hard worker and consensus-builder while serving as the head of the comptroller commission that investigates allegations of government corruption.
Now he is drawing attention on the international stage.

U.S. President Donald Trump promised to use the “full weight” of the U.S. economic and diplomatic power to push for the restoration of Venezuela’s democracy.

But for the frontal assault on Maduro’s authority to succeed, Venezuelans fearful of taking to the streets again after past uprisings ended in violent crackdowns and bitter divisions must be prepared to risk it all again. 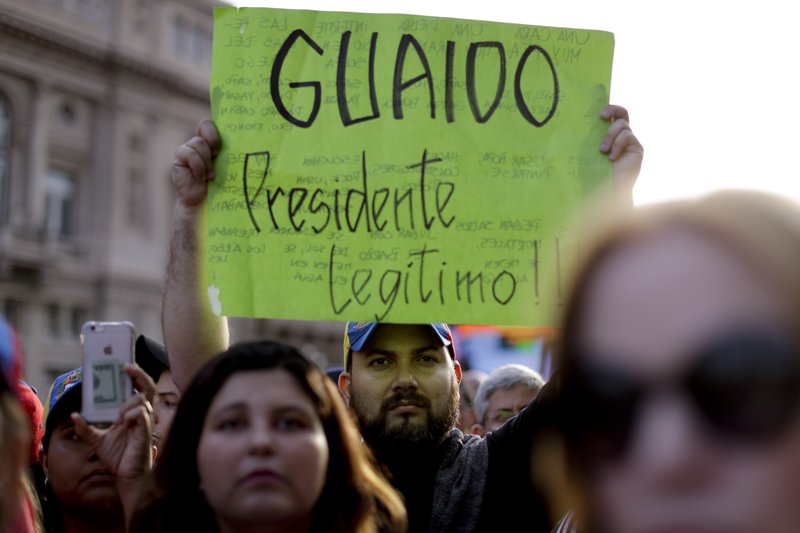 A Venezuelan anti-government protester holds a sign that reads in Spanish "Guaido legitimate President!" during a demonstration in Buenos Aires, Argentina, Wednesday, Jan. 23, 2019.
On Wednesday, they responded to Guaido’s call by gathering in the tens of thousands in Caracas waving flags and chanting “Get out Maduro!” in what was the largest demonstration since a wave of unrest that left more than 120 dead in 2017.

While the protests were mostly peaceful there were no signs that security forces heeded Guaido’s call to join the anti-Maduro movement and go light on demonstrators. His supporters say the constitution gives him the authority to declare himself interim presidency as head of the National Assembly.

“The constitution gives me the legitimacy to carry out the charge of the presidency over the country to call elections,” Guaido said last week. “But I need backing from the citizens to make it a reality.”
___
Associated Press writer Joshua Goodman contributed to this report.
___
Fabiola Sanchez on Twitter: https://twitter.com/fisanchezn
Scott Smith on Twitter: https://twitter.com/ScottSmithAP
Posted by Crude Oil Daily at 11:24 AM