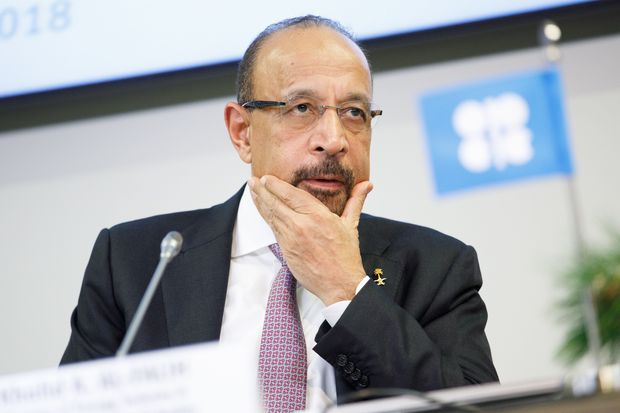 Saudi Arabia to reduce crude exports by up to 800,000 barrels a day from November levels

By: Benoit Faucon and Summer Said


Saudi Arabia is planning to cut crude exports to around 7.1 million barrels a day by the end of January in hopes of lifting oil prices above $80 a barrel, according to OPEC officials.

The new strategy comes as the kingdom seeks to cover a large government spending boost. It said last month that it planned to increase its expenditures by 7% in 2019—the equivalent of about $20 billion—as the country struggles to fund ambitious plans to diversify its economy beyond petroleum products.

Crown Prince Mohammed bin Salman, the de facto Saudi ruler, has faced a sharp decrease in oil prices since October amid a supply glut. The brutal killing of journalist Jamal Khashoggi by Saudi operatives in October has also deterred foreign companies from working in the kingdom and investing in its economic development plans.

The new Saudi budget requires oil prices to rise to as much as $95 a barrel, according to an official with the Organization of the Petroleum Exporting Countries. But the kingdom would be satisfied with prices at $80 to $85 a barrel, a range that would limit its need to dip it into its financial reserves, according to people familiar with its thinking.

To cover proposed expenditures, Riyadh is set to reduce crude exports by up to 800,000 barrels a day from November levels.

The U.S. market will see the largest reduction in Saudi oil exports, according to an OPEC official. Overall, the export cuts would go beyond the six-month commitment it made in early December to OPEC.

At an OPEC meeting last month, Saudi Arabia agreed to reduce its production by 2.5% from October levels starting in January. Later it upgraded its target to 3%. But the planned reduction in shipments—the most vital component of its supply because it affects global oil markets—would bring the export cut to 7.8%.

Oil prices fell below $80 a barrel in October after Saudi Arabia turned up the spigots in response to U.S. pressure to replace sanctioned Iranian oil. The increase turned out to be more than the market needed.

OPEC officials said the new effort is unlikely to lift prices to a level the Saudis require in the short term. They said $80-a-barrel oil, however, could become possible in the second half of the year when analysts anticipate an increase in oil demand.

Brent crude, the global benchmark, rose 1.2% to just under $59 a barrel and WTI jumped 3.5% to just under $50 a barrel Monday after The Wall Street Journal reported Saudi Arabia planned to deepen export cuts.
Posted by Crude Oil Daily at 2:17 PM