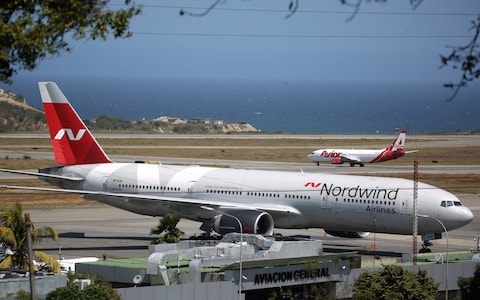 Allegations that a Russian jet which landed in Caracas was due to load an $840 million portion of the country's gold reserves surfaced early on Wednesday Credit:  REUTERS/ANDRES MARTINEZ CASARES

Russian authorities have moved to quash suspicions that 20 tonnes of gold are about to be moved from the Venezuela’s national bank to Moscow.

Allegations that a Russian jet which landed in Caracas was due to load an $840 million portion of the country's gold reserves surfaced early on Wednesday.

Venezuela’s opposition-controlled parliament, sidelined by the Maduro regime, said in a tweet that they received information from the Bank of Venezuela that a plane from Moscow arrived to Caracas to “extract at least 20 tons of gold” - 20 per cent of the bank’s holdings.

“We are demanding the Bank [to reveal] details of what is happening. That gold does not belong to Calixto Ortega, [head of the Bank]. It belongs to the Venezuelan people,” the tweet read.

Dmitry Peskov, Kremlin spokesman, said on Wednesday that he is not aware of any plans to bring gold to Moscow.

“Russia is prepared to help resolve the political situation [in Venezuela] in any way possible, without interfering into the country’s internal affairs,” Mr Peskov was quoted as saying by the RBC news outlet.

The Boeing 777, with space for some 400 passengers and belonging to Russia's Nordwind Airlines, was parked by a private corner of the airport after flying direct from Moscow, according to flight tracking data and Reuters photos.

It was the first time it had made the route, the data showed.

Novaya Gazeta said that the plane carried two crew teams and suggested there was no obvious reason for it to fly there: Russian tourists are officially recommended not to visit Venezuela, sales of package tours to the country have stopped long ago, and Russia’s Foreign Ministry hasn’t announced plans to evacuate Russian citizens from the country.

Venezuelan social media was alive with theories, including that the place had brought mercenaries, or was there to escort Maduro into exile.

Venezuela's Finance Minister Simon Zerpa claimed there were no Russian planes in the Caracas airport, despite the pictures.

Responding to questions about the gold, Peskov urged journalists "to be careful with different hoaxes."

Maduro claims he is facing a Washington-backed coup attempt led by opposition leader Juan Guaido, who last week proclaimed himself president and was recognized by the United States as the legitimate head-of-state.

Russia has accused US President Donald Trump's administration of trying to usurp power in Venezuela and warned against any military intervention. The Kremlin on Tuesday condemned new U.S. sanctions against Venezuela's vital oil sector as illegal interference in the OPEC member's affairs.

Russia’s Foreign Minister Sergei Lavrov said on Tuesday that Russian government “will do anything” to support Maduro.

Guaido is currently petitioning the Bank of England to prevent Mr Maduro getting his hands on $1.3 billion (£1 billion) in gold held in London vaults. Venezuela, which is struggling to provide basic services, has some $8 billion in foreign reserves around the world.

On Monday the US placed sanctions on Venezuela’s state oil company – a move designed to cripple Maduro’s regime financially, and sway the military to defect.
Posted by Crude Oil Daily at 12:26 PM