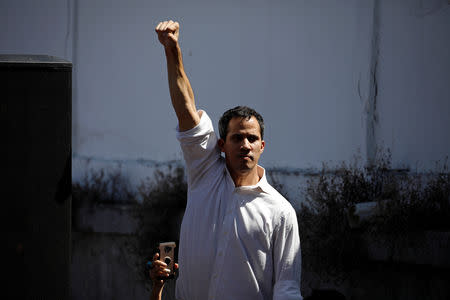 Juan Guaido, President of the Venezuelan National Assembly and lawmaker of the opposition party Popular Will (Voluntad Popular), gestures while he arrives to a gathering in La Guaira, Venezuela January 13, 2019. REUTERS/Carlos Garcia Rawlins

CARABALLEDA, Venezuela (Reuters) - Venezuelan opposition leader Juan Guaido led a rally on Sunday after being briefly detained by intelligence agents, days after saying he would be willing to replace the increasingly isolated President Nicolas Maduro.

Guaido's comments on Friday spurred some opposition sympathizers to conclude that he had declared himself interim president, and led several government officials to say he should be arrested for treason.

Intelligence agents on Sunday pulled him from his car on the way from the capital of Caracas to the coastal town of Caraballeda, his wife and opposition legislators said.

He was released shortly thereafter, they said.

"I want to send a message to Miraflores - the game has changed," said Guaido, the head of the opposition-run congress referring to the presidential palace, from a stage surrounded by cheering opposition sympathizers.

Information Minister Jorge Rodriguez told state television that the detention was an "irregular procedure" by rogue agents who wanted to help the opposition create a "media show," adding that the agents would face disciplinary action.

Guaido called Rodriguez's comments a sign that the government had lost control of its own security forces.

Asked whether he should be considered interim president, Guaido responded: "That has been clarified several times."

The U.S. State Department on Saturday had called on Venezuelan security forces to respect the "safety and welfare" of Guaido and other legislators, calling for an "orderly transition to a new government."

Maduro was sworn in to a second term on Thursday, defying critics in the United States and Latin America who called him an illegitimate usurper of a nation where economic chaos has wrought a humanitarian crisis.

The once-booming OPEC nation's economy has collapsed following the fall of oil prices in 2014. Inflation is close to 2 million percent and some 10 percent of the population has emigrated since 2015 in search of better living conditions.

Maduro says the country is victim of an "economic war" led by his political adversaries with the help of Washington. He insists the 2018 vote was legitimate and that the opposition boycotted it because it knew it would lose.