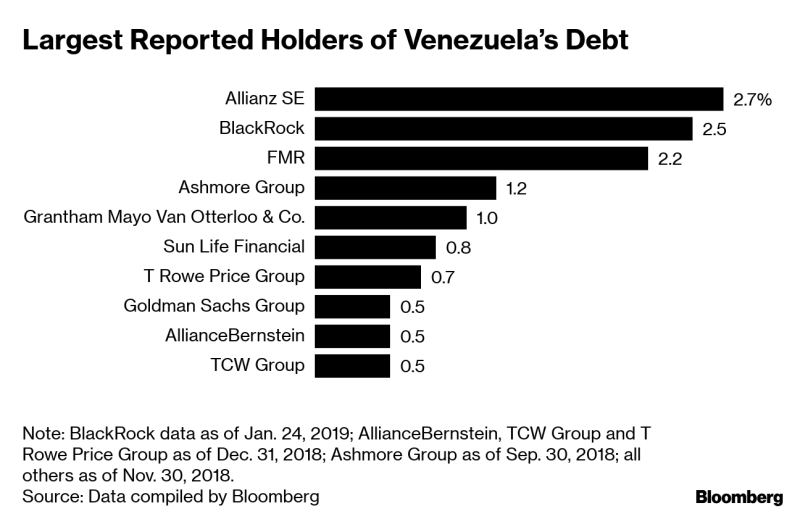 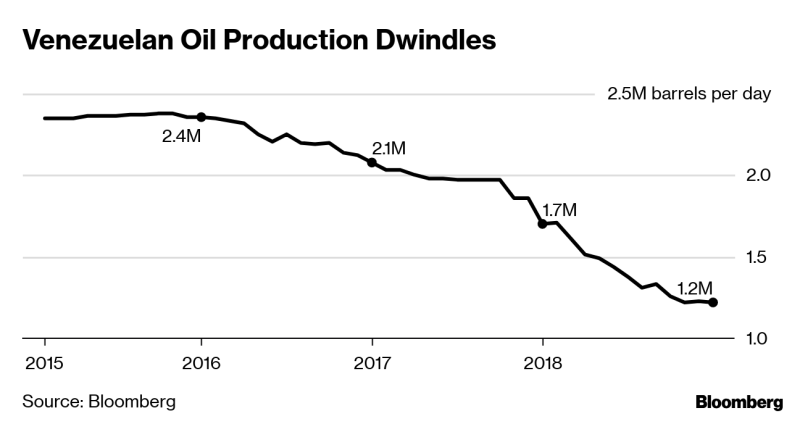 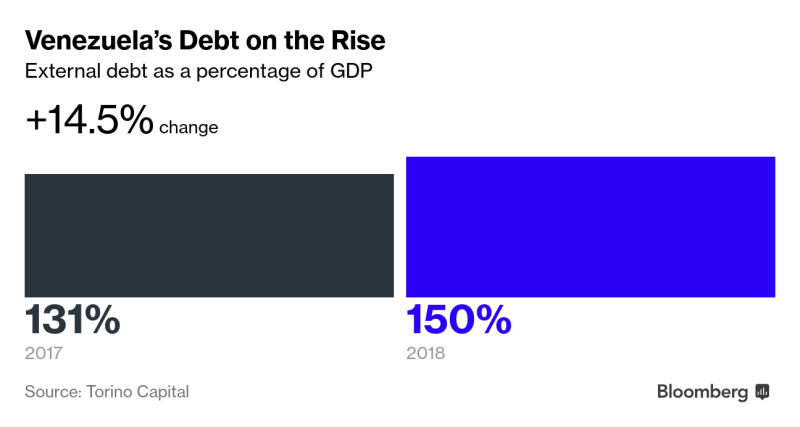 (Bloomberg) -- The struggle for control of Venezuela is not only about securing the military’s support or holding the streets. It is also about how much of the country’s dwindling financial resources President Nicolas Maduro can keep his hands on.

The U.S., backed by Brazil, Canada and others, has recognized Juan Guaido, the National Assembly leader, as Venezuela’s legitimate president, and is trying to channel as much of the country’s income to him as possible. The Trump administration tightened the screws with a de-facto block on exports of Venezuelan oil to the U.S.

With debt rising dramatically and reserves diminishing fast, following is a snapshot of the Maduro administration’s financial lifelines.

Representing the overwhelming majority of Venezuela’s income, oil production plummeted to 1.22 million barrels per day in December, half the level of three years ago. Assuming an average price of $52.12 for that month, revenue would have totaled $1.86 billion. Output is expected to fall another 33 percent in 2019, according to Fitch.The biggest takers of Venezuelan crude in December were the U.S. (407,400 b/d), India (293,500 b/d), and China (238,700 b/d), according to fixture reports and ship-tracking data compiled by Bloomberg.The U.S. on Monday announced sanctions on Venezuela’s state-owned oil company PDVSA.Freezing of U.S. and European accounts is likely to bring oil production to a standstill and cause the economy to contract by 26.4 percent in 2019, Torino Chief Economist Francisco Rodriguez wrote.

Gold reserves plunged to $5.45 billion in November from $6.76 billion in July, and from $21.27 billion in Sept. 2011, according to Caracas Capital, an investment bank and financial consultancy. It says the bulk of the reserves are held by Venezuela itself.Accessing Venezuela’s gold reserves overseas is becoming increasingly difficult for Maduro, as shown by the Bank of England’s decision to deny a withdrawal request.

Total external debt in 2018 was $157 billion or 150 percent of GDP, up from 131 percent a year earlier, according to Torino Capital of New York, a boutique investment firm.China has been a constant source of financing for Venezuela, having lent some $70 billion, mostly against oil, according to Asdrubal Oliveros, of Caracas-based Ecoanalitica. Torino Capital estimates that Venezuela owes China $13.5 billion.

Citgo Petroleum Corp., the Houston-based subsidiary of PDVSA, buys most of Venezuela’s crude. U.S. Treasury Secretary Steven Mnuchin said Monday that Citgo would be able to continue to operate but won’t be allowed to remit money to the Maduro regime. Russia’s Rosneft has a 49.9% stake in Citgo as collateral for a $1.5 billion loan.Vast amounts of oil revenue are estimated to have been siphoned off PDVSA and parked abroad, including in the U.S., Spain, and Russia.
TRADE, AID

The biggest export markets for Venezuela are the U.S. (40.4%), China (24.4%) and India (23.3%), Torino Economics figures show. Other top trading partners include Mexico, Singapore and Spain.Foreign donors, including the United Nations, have provided food aid and medicine. Around 12 percent of the population is under-nourished.
--With assistance from Ben Bartenstein and Lisa Beyer.

To contact the reporters on this story: Fabiola Zerpa in Caracas Office at fzerpa@bloomberg.net;Hannah Recht in New York at hrecht@bloomberg.net

To contact the editors responsible for this story: Vivianne Rodrigues at vrodrigues3@bloomberg.net, ;Rosalind Mathieson at rmathieson3@bloomberg.net, Raymond Colitt, Alan Crawford

For more articles like this, please visit us at bloomberg.com
Posted by Crude Oil Daily at 11:05 AM