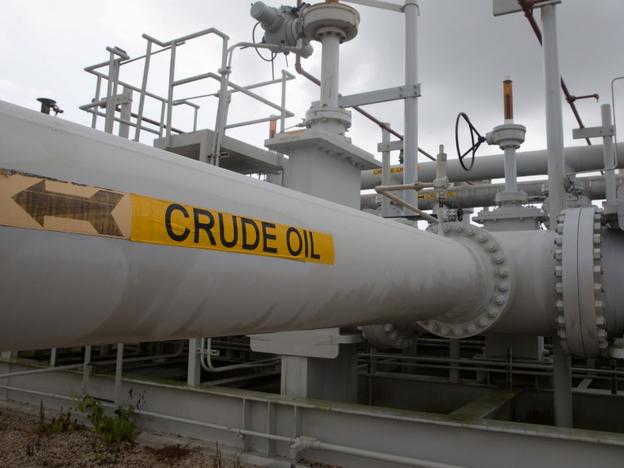 A maze of crude oil pipes and valves is pictured during a tour by the Department of Energy at the Strategic Petroleum Reserve in Freeport, Texas, U.S. June 9, 2016. REUTERS/Richard Carson

"Bearish news from the supply side has dragged prices down. The spotlight seems to be on the problem of oversupply once again," said Frank Schallenberger, head of commodity research at LBBW in Stuttgart.

Weekly U.S. government data showed on Thursday that U.S. oil production C-OUT-T-EIA rose 1 percent to 9.34 million barrels per day (bpd), correcting a drop in the previous week that was down to one-off maintenance work and hurricane shutdowns.

The rise in U.S. output coincides with exports from the Organization of the Petroleum Exporting Countries climbing for a second consecutive month in June to the highest level this year.

Russia, which is cooperating with OPEC in a deal to stem production, said on Friday it was ready to consider revising the parameters of the deal if needs be.

A group of oil producing countries monitoring the output deal will meet on July 24 in Russia at which point they could recommend adjusting the pact.

The market largely ignored news from the U.S. Energy Information Administration (EIA) that U.S. crude inventories USOILC=ECI fell by 6.3 million barrels in the week to June 30 to 502.9 million barrels, the lowest since January.

"In the near term this leaves us with a volatile trading range of roughly $45-50 a barrel."

If OPEC was unable to balance the market change would likely be forced on it by oil prices, said Morgan Stanley.

The U.S. bank said a WTI price of $46 to $50 per barrel would likely prevent U.S. production rising in the mid- to long-term, but prices need to be "in the low $40s" for U.S. output to fall significantly.
Morgan Stanley said it expected WTI to remain below $50 until mid-2018.