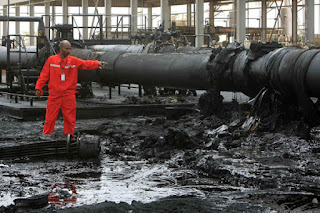 A storage tank at Sudan's primary oil processing facility in Heglig has been destroyed in a fire. Eight generators were also damaged in the blaze and oil is reportedly leaking onto the ground. This occurred after South Sudanese troops entered the area last Thursday.

The plant, which is operated by the Greater Nile Petroleum Operating Company (GNPOC) will reportedly find it very difficult to initiate production again after this incident. GNPOC is a joint operating company owned by China's CNPC and Petronas of Malaysia.

The area's average daily output of 60,000 barrels, which is equal to nearly half the country's total, has reportedly fallen to 40,000 barrels due to civil unrest and conflict.
Posted by Crude Oil Daily at 8:40 AM