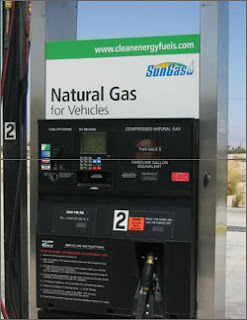 NEW YORK (AP) -- The U.S. natural gas market is bursting at the seams.
So much natural gas is being produced that soon there may be nowhere left to put the country's swelling surplus. After years of explosive growth, natural gas producers are retrenching.

The underground salt caverns, depleted oil fields and aquifers that store natural gas are rapidly filling up after a balmy winter depressed demand for home heating.

The glut has benefited businesses and homeowners that use natural gas. But with natural gas prices at a 10-year low — and falling — companies that produce the fuel are becoming victims of their drilling successes. Their stock prices are falling in anticipation of declining profits and scaled-back growth plans.

Some of the nation's biggest natural gas producers, including Chesapeake Energy, ConocoPhillips and Encana Corp., have announced plans to slow down.

"They've gotten way ahead of themselves, and winter got way ahead of them too," says Jen Snyder, head of North American gas for the research firm Wood Mackenzie. "There hasn't been enough demand to use up all the supply being pushed into the market."

So far, efforts to limit production have barely made a dent. Unless the pace of production declines sharply or demand picks up significantly this summer, analysts say the nation's storage facilities could reach their limits by fall.

"There would be no floor," he says.

Since October, the number of drilling rigs exploring for natural gas has fallen by 30 percent to 658, according to the energy services company Baker Hughes. Some of the sharpest drop-offs have been in the Haynesville Shale in Northwestern Louisiana and East Texas and the Fayetteville Shale in Central Arkansas. But natural gas production is still growing, the result of a five-year drilling boom that has peppered the country with wells.

The workers and rigs aren't just being sent home. They are instead being put to work drilling for oil, whose price has averaged more than $100 a barrel for months. The oil rig count in the U.S is at a 25-year high. This activity is adding to the natural gas glut because natural gas is almost always a byproduct of oil drilling.

Analysts say that before long companies could have to start slowing the gas flow from existing wells or even take the rare and expensive step of capping off some wells completely.
"Something is going to have to give," says Maria Sanchez, manager of energy analysis at Bentek Energy, a research firm.

U.S. natural gas production has boomed in recent years as a result of new drilling techniques that allow companies to unlock fuel trapped in shale formations. Last year, the U.S. produced an average of 63 billion cubic feet of natural gas per day, a 24 percent increase from 2006. But over that period consumption has grown half as fast.

The nation's storage facilities could easily handle this extra supply until recently because cold winters pushed up demand for heating and hot summers led to higher demand for air conditioning. Just over half the nation's homes are heated with natural gas, and one-quarter of its electricity is produced by gas-fired power plants.

But this past winter was the fourth warmest in the last 117 years, according to the National Oceanic and Atmospheric Administration. It was the warmest March since 1950.

Between November and March, daily natural gas demand fell 5 percent, on average, from a year earlier, according to Bentek Energy. Yet production grew 8 percent over the same period.

"We haven't ever seen a situation like this before," says Chris McGill, Vice President for Policy Analysis at the American Gas Association, an industry group.

There is 4.4 trillion cubic feet of natural gas storage capacity in the U.S. If full, that would be enough fuel to supply the country for about 2 months.

If current production and consumption trends were to continue, Bentek estimates that storage facilities would be full on October 10.

Storage capacity, which has grown by 15 percent over the past decade, cannot be built fast enough to address the rapidly expanding glut. And analysts note there is little financial incentive to build more anyway.

The low price brought on by the glut has increased demand for natural gas among industrial users and utilities.

Makers of chemicals, plastics and fertilizers that use natural gas as a feedstock are expanding. Garbage trucks, buses and delivery vehicles are using more natural gas. Electric power producers are switching from coal to natural gas whenever possible.

This won't add up to enough new demand quickly enough to relieve the pressure on storage facilities this summer.

Scorching temperatures this summer would do the trick, but Mother Nature is not expected to cooperate.

Temperatures this summer are forecast to be about normal, and much cooler than the last two summers, says David Streit, a meteorologist at Commodity Weather Group expects.

Sultry winters, he said, do not usually develop into sultry summers.

Jonathan Fahey can be reached at http://twitter.com/JonathanFahey .
Posted by Crude Oil Daily at 10:48 AM