Boston Globe tech reporters tell the story of the region’s technology and innovation industry, highlighting key players, trends, and why they matter.

“Everett residents finally have the chance to realize the benefits of the types of economic development opportunities they deserve with the redevelopment of the ExxonMobil … parcel and the Constellation Energy generating sites,” Everett Mayor Carlo DeMaria said in an e-mail. “I have always known the potential that Everett has to evolve from its industrial age commercial uses because we have the acreage that is no longer found in surrounding communities.”

DeMaria said he hopes the developer interest can help city officials make the case for public transit improvements, such as an extension of the Silver Line bus system or a new station for the commuter rail trains that travel through the city but do not stop there.

The city of Everett has touted much of the 95-acre Exxon property — actually four parcels that stretch from the Sweetser Circle rotary, at routes 16 and 99, all the way to the Mystic River — for life sciences. But Davis has not yet disclosed any plans for the site.

A rendering of Wynn Resort’s proposed concert venue and parking garage across the street from the Encore Casino in Everett.
Elkus Manfredi Architects

The firm’s chief development officer, Michael Cantalupa, confirmed in an e-mail that a Davis affiliate has signed an agreement with Exxon for its “Everett Fuels Storage and Distribution Terminal,” but would not comment beyond that. (Davis is also building a roughly 125,000-square-foot “last mile” distribution center near the Chelsea-Everett line, rumored to be for Amazon.)

Similarly, a spokeswoman for Exxon, which had hired brokerage firm JLL to market the site last year, declined to say much about the deal other than to confirm it and to add that it is consistent with the energy giant’s strategy to “continually evaluate and upgrade our portfolio.”

Matt Lattanzi, Everett’s director of planning and development, said city officials have had preliminary discussions with Davis executives about the developer’s interest but have not yet seen any formal plans. He said the property in all likelihood will be home to a mixed-use project totaling millions of square feet, with some residential construction, likely close to Sweetser Circle. He said he’s hopeful to see official plans submitted within the next few months.

“It’s such a huge parcel, so heavily contaminated,” Lattanzi said. “Seeing a redevelopment down there would be transformative.”

Next to hit the market will be a big section of Constellation’s massive riverside power plant. Most of the turbines have been shut down, and the two remaining gas-fired turbines, known as Mystic 8 and 9, are slated to be retired in mid-2024. Spokesman Mark Rodgers confirmed Constellation hired brokerage firm CBRE to sell its already decommissioned units, labeled 1 through 7, and much of the land around them. The process will start in the third quarter of this year, with a goal to “maximize benefits” for Constellation and for Everett, Rodgers said.

A number of potential buyers have expressed interest, Rodgers said. The sale process, he said, is designed to create “a fair process for all interested parties.” The two electric transmission switchyards next door are owned by Eversource, and are not part of the sale.

Because the Mystic power plant parcel is across Broadway from the casino and adjacent to Wynn-owned land, the Las Vegas-based company is viewed as a possible buyer. But all spokesman Michael Weaver would say when asked about his potential interest is that it is “very supportive of redevelopment” at both the Exxon and Constellation sites. 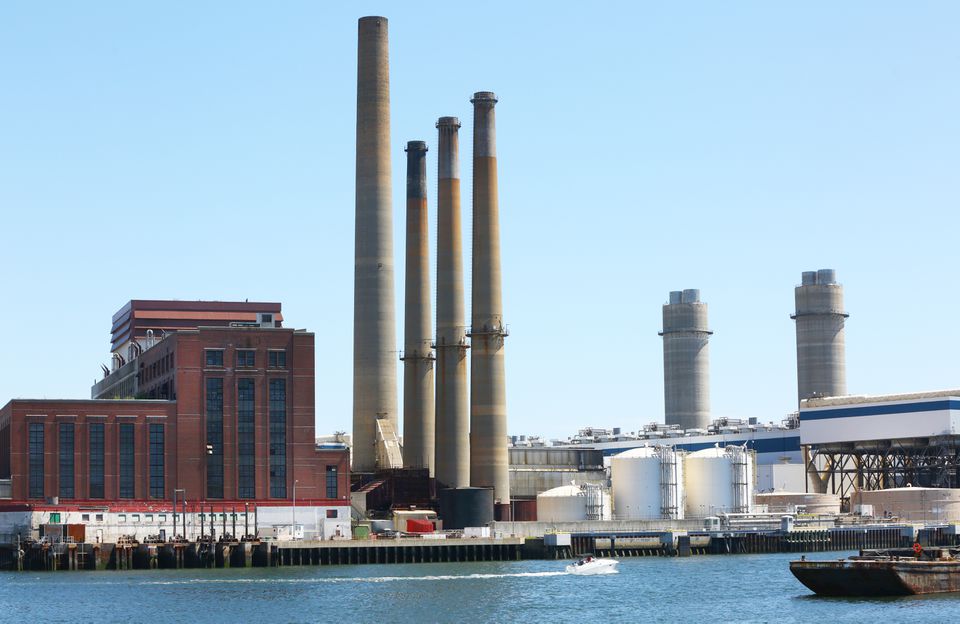 The site of the Mystic Generating Station in Everett will soon be put up for sale, likely for redevelopment.Pat Greenhouse/Globe Staff

DeMaria has envisioned a dining and entertainment district along that stretch of Broadway across from the casino. For that reason, Everett officials added the section of the power plant property in question to an urban renewal area last year that would enable the city to take it by eminent domain, although officials said at the time they would prefer to see a private sale of the land instead.

Likewise, Wynn executives would like to see a hospitality-oriented destination to augment their casino, which is one reason why they’re looking to build hotels, restaurants, and the events venue on 13 acres of Wynn-owned land across the street.

Then there’s the Revolution.

The soccer team currently shares Gillette Stadium in Foxborough with the New England Patriots. But The Kraft Group have spent years looking for an appropriate place in or near Boston to build a roughly 20,000-seat soccer arena that the Revs could call their own. Several parcels that have come up for consideration in the past are now slated for other uses: the old Wonderland dog track in Revere, for example, will be home to a new high school, while the former Bayside Expo site in Dorchester was acquired by developers who are proposing a large life-sciences oriented project. A spokesman for The Kraft Group declined to comment on any potential interest in Everett.

The movements with the Exxon and Constellation properties were welcomed by developer John Tocco, whose V10 Development is planning two apartment complexes that would bring more than 600 units to old industrial properties just across the railroad tracks from the Exxon site, in an area known as the “Commercial Triangle.”

Tocco said the developer interest in the Exxon site shows that when Everett residents approved the casino project, they were betting on something much bigger than a casino. They were betting on a full-scale revitalization of a major industrial section of their city.

“This is a tremendously exciting opportunity for the residents of Everett to see this industrial site transformed,” Tocco said. “Its really been a desire of the community, and the people I talked to, for almost a decade at this point.”