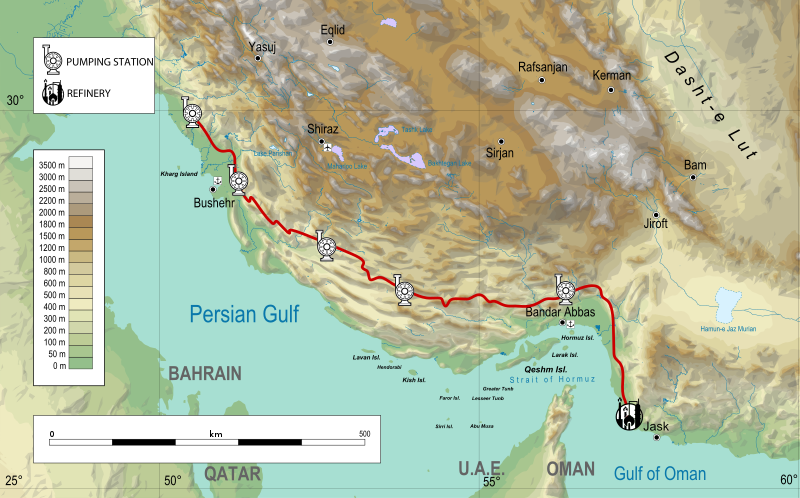 The National Iranian Oil Company (NIOC) will soon begin transferring oil through the Goreh-Jask pipeline, which runs from the Goreh oil terminal in the Bushehr Province to Jask oil terminal along the Gulf of Oman.

The 1,1000-km Goreh-Jask pipeline cost about $1.8 billion to build and will be able to transfer 1 million barrels per day (bpd) of crude oil from the Goureh oil terminal in the northwest of Iran to the Jask region on the Sea of Oman, without tankers having to pass through the Strait of Hormuz, a busy passageway into the Persian Gulf which slows deliveries by several days.

“After the oil reaches Jask, which takes less than a month, in the near future, the official opening ceremony and commissioning of this national project will be held in the presence of the President,” says NIOC CEO Masoud Karbasian.

NIOC says that the pipeline and terminal are part of a national strategic plan and will guarantee the continuation of Iran’s crude oil exports and the decentralisation and diversification of export terminals, as well as creating jobs on the Makran coast.

Dubbed as the largest ongoing project in Iran’s oil industry, the Goreh-Jask pipeline is the country’s second major oil terminal, constructed by Pars Oil and Gas Company on 60 hectares of land and with nearly €260 million of investment. Masoud Karbasian said: “Production of transmission valves, electric pumps, laying a thousand kilometres of pipeline along with the construction of storage tanks, terminals and the single point mooring (SPM) in Jask port using domestic capacities shows the national determination for completing this great and strategic project.”

Iran has been planning since at least 2012 to set up the Jask terminal, just outside of and bypassing the Strait of Hormuz, and NIOC recently said it plans to start shipping crude from the terminal next month.