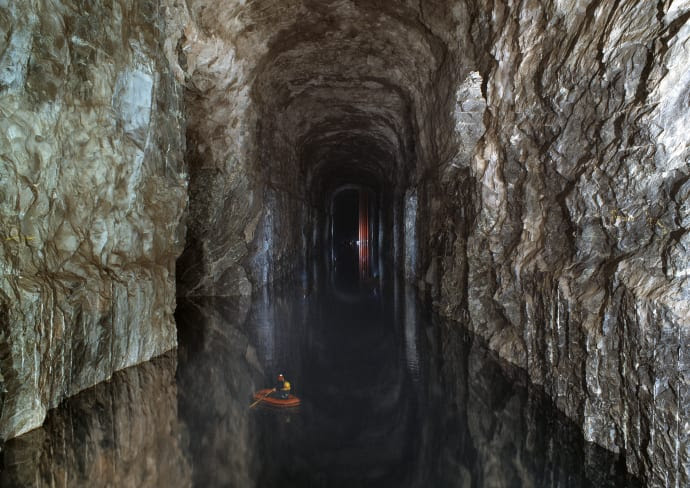 Crash into negative prices jolts producers into cutting back. From salt caverns in Sweden to train cars in Chicago, oil traders spent the past two months stuffing unwanted crude into any available space after demand collapsed in the face of the coronavirus pandemic.

Traders called on locations they usually ignored, including barges on rivers normally used for making relatively small deliveries to inland markets. Rail cars were filled up and so were “frac” tanks, normally used for holding water and chemicals used in the hydraulic fracturing process.

In late April, benchmark US crude prices fell below zero for the first time in history. Traders due to take delivery of oil at Cushing, Oklahoma, struggled to access the storage they needed, forcing them to pay rivals to take the crude off their hands. Brimming tanks and a growing armada of floating supertankers suggested that the world was running out of places to stow its fuel.

Patrik Kinnerfors, chief executive of Scandinavian Tank Storage, which has almost 4m cubic metres of storage capacity including underground caverns in Sweden and Norway, said he was inundated with inquiries in March and April. “All of our caverns are rented out and should be more or less full before the summer,” he said.

The price of storage has surged in the past two months as crude demand fell globally by as much as 30 per cent because of the coronavirus lockdowns. Brent crude, the international benchmark, fell from about $70 a barrel in early January to an 18-year low below $20 a barrel last week. It took the sub-zero crash in late April to prompt producers to tighten their taps.

As traders looked for places to stow unprecedented volumes of excess oil, the cost of hiring a very large crude carrier, capable of being parked at sea holding more than 2m barrels, surged to about $230,000 a day in late March, according to Clarksons Platou Securities.

In the past week, prices have rebounded by about $5 a barrel. The oil market might even be at an inflection point, traders said, as many countries ease lockdowns and travel bans, boosting demand.

Shipping rates have fallen, with the cost of hiring a VLCC halving over the past week to $88,600 a day. The six-month Brent spread has almost halved to below $7 a barrel.

The rosier outlook is partly due to supply cuts by Opec members and their allies, due to take effect on May 1. Other countries such as Norway have announced their own curbs. About 3m barrels a day of North American output is also being taken off the market as low prices and limited pipeline capacity force shale and tar-sands producers to scale back.

“It took some time but the size of the cuts is now coming faster and larger than we expected,” said Ben Luckock, co-head of oil trading at Trafigura, one of the world’s biggest independent oil traders. “We might still be some distance away from being a healthy market, but we think the peak of the crisis for oil storage has passed.”

“The flow rates from the pipelines have been slowed down,” said Dana Grams, chief executive of Converge Midstream, which operates salt domes used for oil storage near Houston. Mr Grams said there had been a “significant” cutting back of production in the Permian Basin, the largest shale oilfield, and the Eagle Ford formation in south Texas.

Meanwhile, the market is seeing growing demand from China, which is keen to snap up cheap oil for its strategic reserves and refineries as its economy rebounds from the virus shutdowns.

But not everyone is optimistic. Rystad Energy, a consultancy, said it still sees storage maxing out in the coming weeks, even with demand improving as countries such as Germany and the US ease lockdowns.

“The oil market is not magically fixed,” said Louise Dickson, analyst at Rystad. “The storage issue still looms large . . . boardrooms of oil companies must make very costly but necessary decisions to scale back production and give the market some breathing space.”

Mr Grams at Converge said demand will “come back pretty slowly”, while some cash-strapped producers will continue to pump even at prices that are not sustainable in the long term.

Rystad estimates that 28 tankers with Saudi oil, carrying a total of 43m barrels, will arrive on US shores between April 24 and May 24. All had set sail before a truce was called in the oil price war.

Still, many believe the most frenzied period of the storage search could soon be over, as prices adjust and the contango trade weakens. “We’re still in for a rocky old time, but the emergency is no longer acute,” said Mr Luckock at Trafigura.