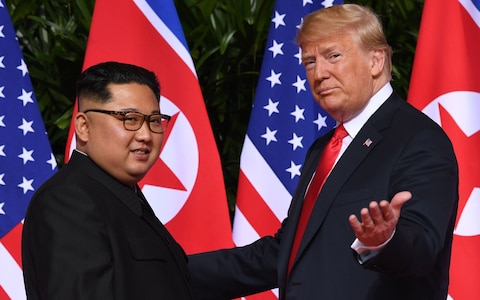 President Trump said Tuesday that he was suspending military exercises on the Korean Peninsula and that he expected the North Korean leader, Kim Jong-un, to move “very quickly” to dismantle his nuclear arsenal after a day of discussions in Singapore.

But Mr. Trump said economic sanctions against North Korea would remain in place.

The summit meeting was the first of its kind between a sitting American president and a leader of North Korea, and it ended in a joint statement that opened the door to ending seven decades of hostility between the two countries.

Mr. Trump said at a news conference that the United States would stop “the war games,” in what appeared to be a concession to the North. Mr. Trump said the exercises were expensive and “very provocative.”

In their joint statement, the United States “committed to provide security guarantees.” In exchange, Mr. Kim “reaffirmed his firm and unwavering commitment to complete denuclearization of the Korean Peninsula.”

• The two leaders first met privately for less than an hour in a one-on-one session with interpreters present, before breaking off for a larger meeting and then a working lunch with aides.

• The leaders signed their joint statement, in which the United States committed to providing guarantees of security to North Korea in exchange for denuclearization.

• “We had a historic meeting and decided to leave the past behind,” Mr. Kim said as he and Mr. Trump signed the joint statement, adding, “The world will see a major change.”

Mr. Trump was similarly optimistic about the progress they achieved, saying, “We are going to take care of a very big and very dangerous problem for the world.”
Posted by Crude Oil Daily at 11:43 AM