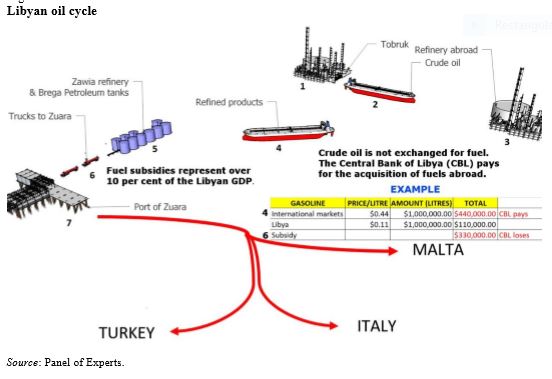 
Oil smuggling activities in waters off the Western Libya coast continue to pose risks to vessels sailing in these waters, insurance and P&I service provider Gard has warned.
In an industry note, Gard advised tanker operators to warn their vessels’ crews of the situation and to carry out an assessment of the risks involved before engaging in voyages to these waters.

Over the last few years, nearly 300 crew members have been arrested and are being held in a Tripoli prison, awaiting trial for alleged oil smuggling, according to the company’s Libyan correspondent.

As a result of the fall of the Gaddafi regime and the subsequent formation of a UN recognised Government in the country, there has been an increase in illegal trade of government oil assets on the black market. The Government is clamping down on this illegal trade and the vessels involved, knowingly or unknowingly, may have their crew arrested for later trials.

According to Gard’s correspondent, tankers suspected of calling at certain loading areas in Western Libya risk being boarded by the Libyan Navy and the vessel and her crew could be detained for further investigations.

The loading areas currently at risk are mostly located offshore between Zawiya and the Tunisian border.

Once a vessel has been detained, investigations can take several years. The correspondent also warned that some of the crew members arrested for alleged oil smuggling have been in prison for over two years - with no real prospect of release in the foreseeable future. And while the crew members remain in the custody of the police, the vessel is kept at anchor as a ‘dead’ ship with negligible support from the port.

Gard advised owners and operators to instruct their ships to continue to exercise caution when entering Libyan ports and waters and follow the official sea navigation routes to any of the working Libyan ports.

For tankers trading to this region, the company’s Libyan correspondent recommended the following:

•             When contracting a vessel for a voyage to Libya, obtain a certificate of origin from the charterers indicating that the shippers are a national oil company (NOC) or an approved legal entity of the NOC. The Libyan NOC has the sole rights and control of all oil exports from the country. Most detentions related to oil smuggling, have been to tankers operating offshore and not in a port.

•             Charterers should establish the legitimacy of cargo interests and whether they can legitimately ship oil cargoes from Libya. The shippers should be able to provide a letter or document to prove that they are authorised by the NOC to ship the cargo. Gard’s correspondents will be able to verify the legitimacy of the documents and provide general guidance, if required.

•             Tankers delivering fuel oil to Libya, should, on completion of cargo operations and upon receiving port clearance, sail directly out of Libyan waters without deviation or delay, as deviations or delays may be construed as suspicious by the authorities.